FACT CHECK: Did Tillis Vote to “Take Away” Protections for Preexisting Conditions? “Yes”

A new, independent fact check from PolitiFact North Carolina succinctly exposed Senator Tillis’ disastrous record of voting to gut protections for preexisting conditions: “Is it true that Tillis voted to take away coverage for people with pre-existing conditions? Yes.”

Despite trying to run from his record on gutting protections for pre-existing conditions, Senator Tillis “voted to repeal a law, the Affordable Care Act, that provides that coverage.” In fact, “repealing and replacing the ACA has been part of the Tillis platform for years.”

As WRAL reporter Cullen Browder said, “If the repeal had been successful, insurers could have legally denied coverage to people with pre-existing conditions.” 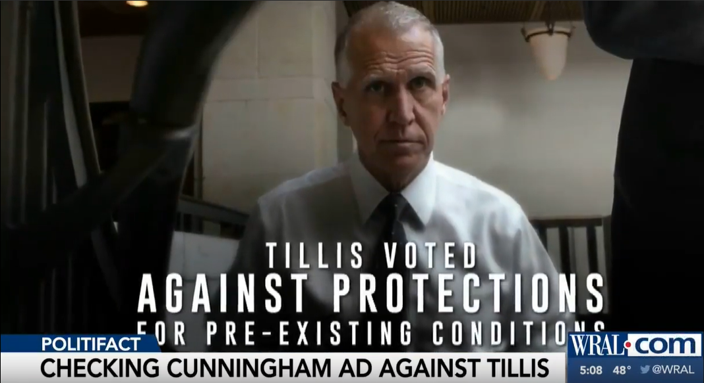 Senator Tillis understands this is a major vulnerability for him, which is why he has tried to paper over his record with his own sham bill. But, according to the new fact check, “experts say that bill falls short.”

According to those experts, Tillis’ bill would either force providers to “leave the market entirely or dramatically increase premiums to cover a very sick and expensive group of people,” meaning that “insurance will be too expensive for individuals who are in good health to purchase.” Tillis’ bill could even allow “companies to deny certain coverage.”

This isn’t the first time experts have panned Tillis’ transparent attempt to cover up a political vulnerability rather than provide meaningful coverage for North Carolinians. Editorial boards exposed it as “false promise,” reports found it is nothing more than “political cover,” and experts have warned it “would do little to protect people with pre-existing conditions.”

“Senator Tillis can run but he can’t hide from his past votes to gut protections for pre-existing conditions,” NCDP spokesman Robert Howard said. “North Carolinians aren’t fooled by Tillis’ false promises. They know that their health care will not be safe until Senator Tillis is out of office.”

Tillis Has Voted to Cut Disease Prevention Funding... Even After Health Officials Warned It Could “Cripple” Their Ability to Respond