Throughout the Month of August, Bus will Travel Across the Country to Highlight How Democrats are Delivering for Working Families

Today, the Democratic National Committee’s “Build Back Better” bus tour made a stop in Durham, North Carolina with Congressman David Price and other elected officials. During the stop, DNC Chair Jaime Harrison, Congressman David Price and local leaders highlighted how President Biden and Democrats are delivering for the American people with the creation of more than four million new jobs, tax cuts for middle-class families, and lower health care costs.

“Thanks to President Biden and Democrats, America is building back better than ever, and the DNC is hitting the road to make sure everybody knows that the ‘D’ in Democrats stands for ‘deliver,’” said Democratic National Committee Chair Jaime Harrison. “Because of President Biden’s and Democrats’ leadership, jobs and wages are up, unemployment is down, and middle-class families are benefiting from a major tax cut. We know there is still work to be done and the DNC’s ‘Build Back Better’ bus tour will remind people across the country that it is Democrats who are delivering results for the American people — no thanks to Republicans.”

“President Biden and Democrats know how high the stakes are for all Americans, and we’re determined to get the job done and leave no one behind,” said Congressman David Price. “We are fighting hard for President Biden’s American Jobs Plan, which will create millions of jobs across the country while investing in our roads, bridges, transit and rail systems, housing and community development. water and power delivery systems, and high-speed internet.”

Read more about the tour here. 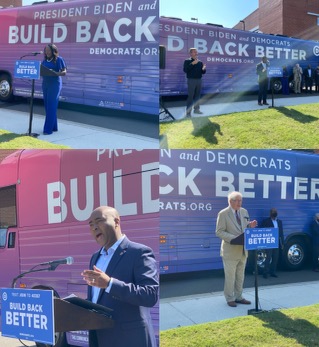