The North Carolina Democratic Party launched a new video ad highlighting how Senator Tillis has voted for a massive corporate tax giveaway after suggesting paying for tax cuts by cutting programs like Social Security and Medicare. The ad is part of a statewide digital buy targeting older voters and Democratic-leaning Independents. 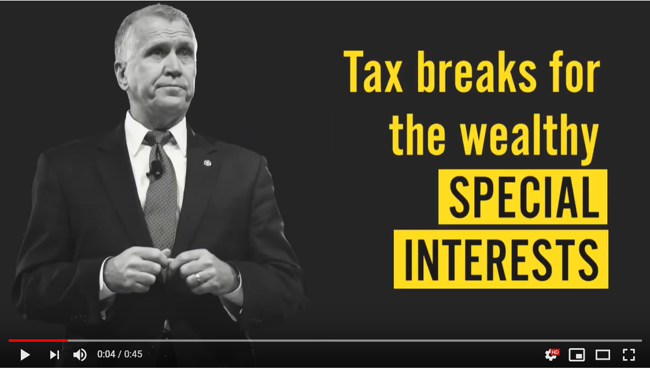 Before voting for the 2017 GOP tax bill, Senator Tillis discussed cutting programs like Social Security and Medicare to pay for tax reform and argued such a move would be “courageous.” “The other thing that we have to do is potentially fund tax reform through opening up entitlements, fixing entitlements, and bending the curve on spending on entitlements,” Tillis said. “You can’t restructure your way out of an $18 or $19 trillion debt by only dealing with 20 percent of the spending, and we have to have people that are courageous enough to do it.”

Senator Tillis has a long record of threatening Medicare and Social Security:

He also suggested younger Americans “may have to wait 6 to 8 months longer” to receive Social Security or Medicare benefits.

“Many North Carolinians rely on programs like Social Security and Medicare for their retirement security, but if Senator Tillis had his way, he would cut earned benefits programs like those to pay for tax cuts for the wealthy and corporations,” NCDP spokesman Robert Howard said. “North Carolinians simply can’t trust Senator Tillis with their retirement.”