Raleigh – This morning, NCDP Chairman Wayne Goodwin and Army veteran Jason Cain held Senator Tillis accountable for his $80 million dollar raid on Camp Lejeune, Fort Bragg, and Seymour Johnson AFB, and outlined the broader negative impacts the cuts will have not only on North Carolina but on our military readiness and national security. Watch the press conference HERE.

“Our most elite special operations soldiers and warriors call North Carolina home. I served with those warriors and I know that Thom Tillis is no warrior,” 10-year Army veteran and former Deputy Secretary for Military Affairs for the State of North Carolina Jason Cain said.

“It’s shocking that Senator Tillis would back a plan that raids $80 million from North Carolina and insist that our troops, our military families, and our nation’s security are the ones who have to sacrifice for his spinelessness,” NCDP Chairman Wayne Goodwin said.

“No state got hit harder than North Carolina” by Senator Tillis’ spineless decision to rubberstamp the president’s emergency declaration. Yesterday, a new report found the Pentagon warned of “dire outcomes” stemming from the loss of funding, stating that “lives would be put at risk” if these projects were not funded.

The Pentagon report specifically cited Camp Lejeune as one of the bases hardest hit. Medical and dental care is provided at the base at “substandard, inefficient, decentralized and uncontrolled facilities,” according to the military, and raiding funding for and delaying construction of a new facility “will result in compromised readiness, uncoordinated care delivery, and inappropriate use of medical resources.”

Late last week, a separate report from the U.S. Air Force found that the Senator Tillis-backed raid on funding “poses various national security risks for the U.S. armed forces,” including service members at bases in a “higher threat environment.”

“This decision does not just cancel or delay North Carolina base projects to improve national security and military readiness, but it impacts our national security across the globe,” Cain continued. “Senator Tillis has forgotten the sacred obligation of generations of North Carolinians to our armed forces. He has calculated that he needs Donald Trump to have his back more than he needs to have the back for our military.”

“Apparently, it’s too much to ask of Senator Tillis to protect the troops and our national security from having their resources robbed for a border wall — resources that Congress said should go to the military,” Chairman Goodwin said. “Now, it’s our military communities and our service members who are paying the price for Senator Tillis’ spinelessness.”

Senator Tillis continues to face criticism for his “Olympic gold flip flop” on the emergency declaration. Yesterday, the USA Today editorial board blasted the Tillis-backed raid as “an insult to America’s service members.” In state, papers and columnists have blasted Tillis for his “$80 million punch to the gut” and “robbing peter to pay for a wall,” calling it “the source of one of the senator’s weakest moments” and saying Tillis “caved like a sand castle at high tide.” 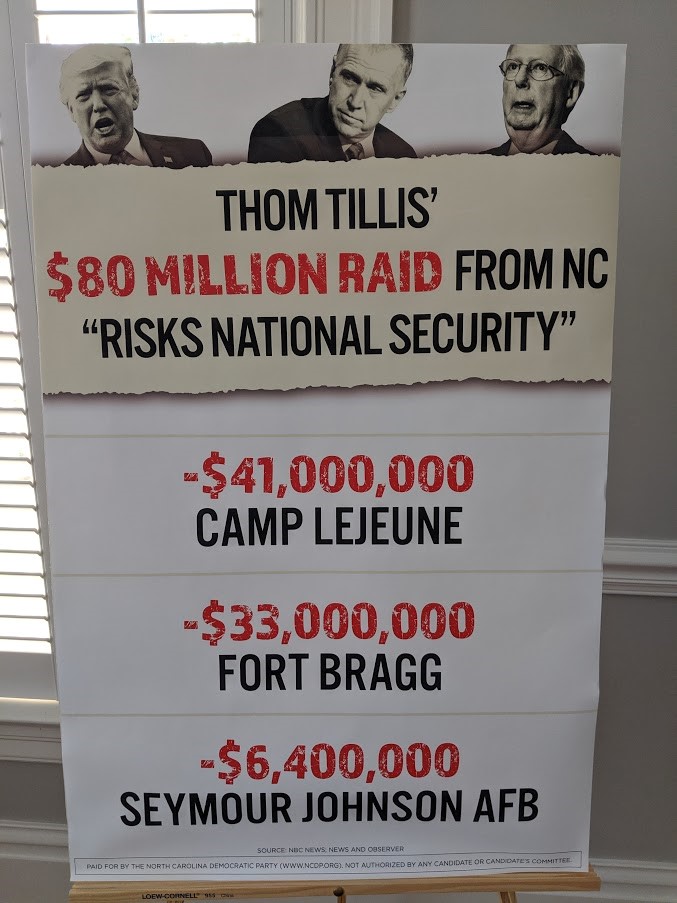