Raleigh – Late Friday afternoon, Senator Tillis quietly forced a local news outlet to delete any mention of him “breaking with” President Trump, the latest instance of Senator Tillis revealing how terrified he is of losing the president’s support in his expensive, far-right primary. Here’s a quick timeline:

WEDNESDAY: The Winston-Salem Journal reports Tillis is “breaking with” Trump:

“Republican United States Sen. Thom Tillis called maintaining whistleblower protections and integrity ‘critically important,’ breaking with fellow Republicans and President Donald Trump who are calling for the identity of a whistleblower who alleged wrongdoing by the president to be revealed.” 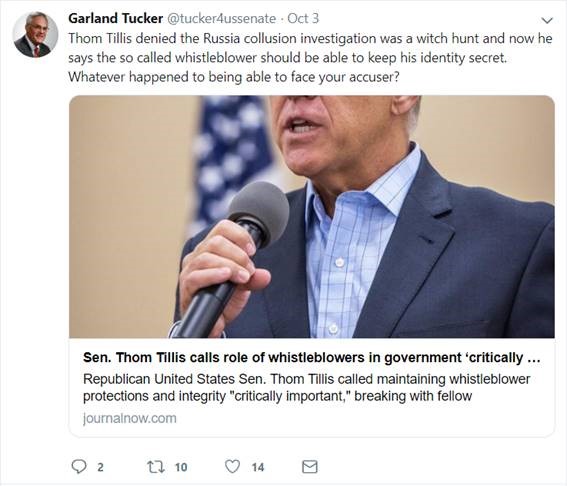 FRIDAY: Tillis forces the outlet to delete any mention of him crossing the President, with the new first paragraph reading:

Senator Tillis, incredibly weak with voters of all political backgrounds and “sweating” his expensive, far-right primary, is terrified of President Trump after being booed at Trump rallies, blasted by Republican operatives in the press who worry that “Trump’s endorsement didn’t undo the damage,” and facing scathing criticism in-state from editorial boards and his primary opponent over his many flip-flops. Tillis lost credibility with North Carolina Republicans after his “Olympic Gold flip flop” that’s now enabling a $80 million raid from North Carolina military bases and causing military families to “question his broader commitment to the military.”

Two Years Ago, Senator Tillis Revealed Why He’s Still Pushing to Gut Protections for People with Pre-Existing Conditions: His Donors