Raleigh – Senator Tillis’ unique weakness with voters of all political stripes and the lasting damage he suffered from a nasty primary fight has opened the door for yet another challenge from a conservative Republican, underscoring that Senator Tillis’ issues start and end with one person: Senator Tillis.

According to multiple reports overnight, Representative Mark Walker is “actively considering a primary campaign” against Senator Tillis after court-mandated redistricting. The main reason Walker is exploring a bid is because Senator Tillis has repeatedly shown himself to be a weak, flip-flopping Washington politician, someone who has, in the words of Mark Walker himself, “their fingers in the political winds” and who nonpartisan analysts have noted “voters of all ideological stripes simply don’t trust.”

The past year has caused lasting damage to Tillis:

Add it all up and it’s clear that Senator Tillis has caused himself lasting damage that has hobbled his reelection campaign and will follow him into the general. That’s because Senator Tillis’ issues start and end with one person: Senator Tillis.

Read more about the last damage Tillis caused himself over the last year: 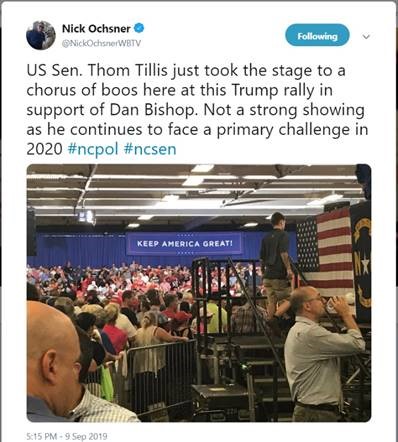 Charlotte Observer Editorial: Which Thom Tillis will we get now? We have a hunch.