At both stops, the Chair discussed Our Carolina Promise, NCDP’s unified legislative agenda focused on our schools, our jobs, our health, and our people. Chair Goodwin also covered the importance of expanding Medicaid for rural North Carolina. In Person and Granville counties, Medicaid expansion would create 255 jobs and help 5,750 people access affordable health care.

With the most important election of our lifetime on the horizon, N.C. Democrats are committed to going everywhere and speaking with every voter as we prepare for 2020. The next leg of the rural tour will travel to western North Carolina. 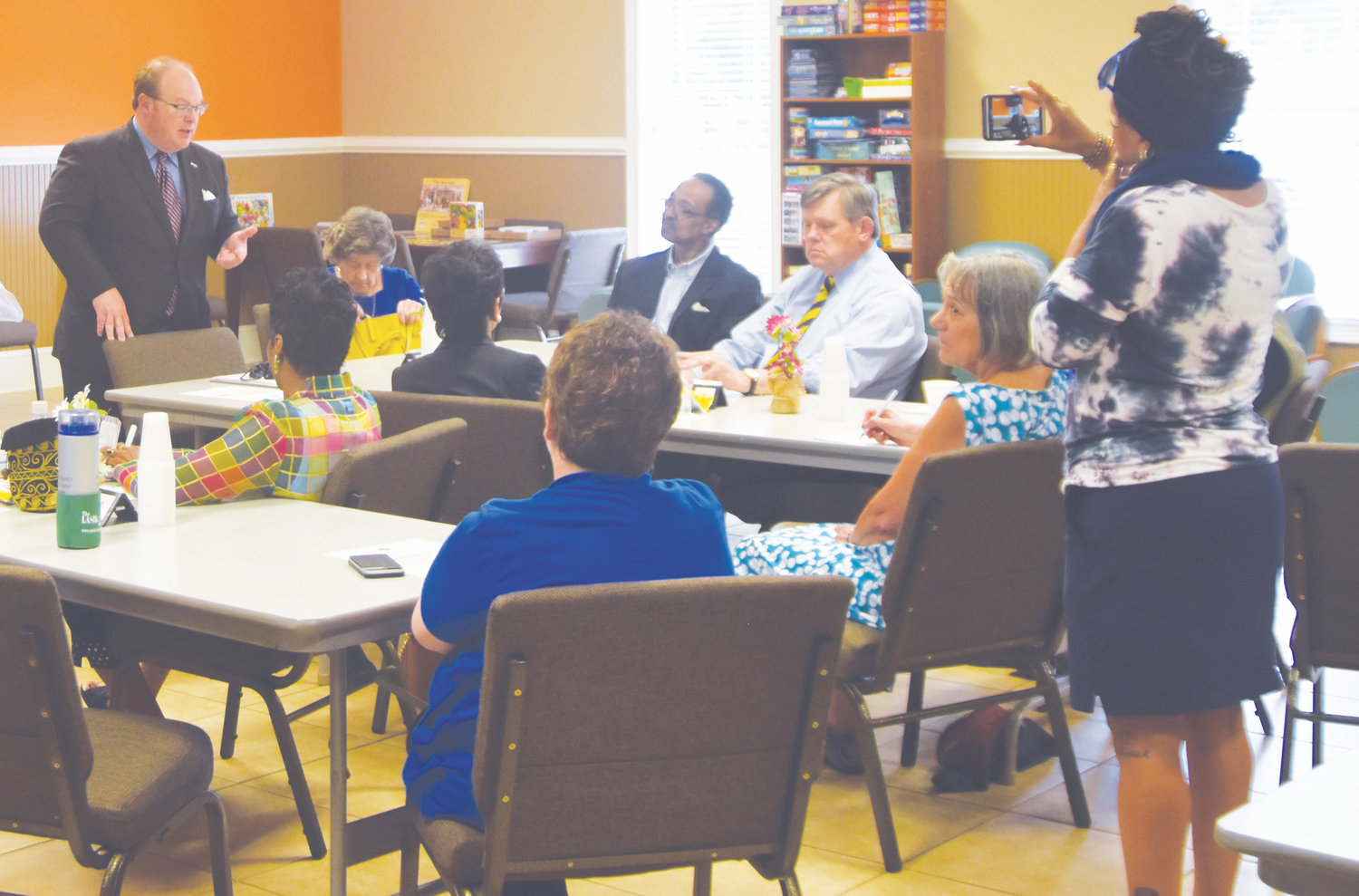 Goodwin explained that the tour’s purpose is to learn the issues and priorities that the people in rural communities have ahead of a pivotal 2020 election.

Goodwin opened the meeting by explaining the state Democratic Party’s platform, called “Our Carolina Promise.” He said the four pillars are jobs, schools, health and the people of North Carolina and encompass the party’s platform.

“When we talk about jobs, what we want is an economy that works for everybody,” Goodwin said.

To do this, Goodwin said stakeholders must provide equal pay for equal work, rebuild the state’s infrastructure and provide workers with the tools to be retrained for 21st century jobs.

Goodwin said the N.C. Democratic Party sees public schools as a great asset to the state and a great incentivizer for unification.

To return to a “first-class public education,” he explained that the state must provide pay and resources to teachers and school systems.

Goodwin spent most of his presentation on the aspect of Medicaid expansion.

He explained that North Carolina is one of 14 states that have refused to expand Medicaid. Income requirements create a gap where people don’t qualify for Medicaid and can’t afford private health insurance.

According to Goodwin, expansion would lead to coverage for 600,000 North Carolinians who do not currently have coverage along with 40,000 new jobs.

“As the former state insurance commissioner, I attest and affirm to you that when we expand Medicaid it will help lower all of our health insurance premiums,” Goodwin said. “When people don’t have health insurance, they go to the emergency room and get uncompensated care. Do you think the hospitals and doctors just leave it like that? No. It affects the prices that everyone is charged and it means the health insurance companies will charge everyone else more. When people say they don’t have a dog in that fight — yes, you do.”

Woodard said there are currently about 3,500 Personians, or 10% of county residents, who fall into the coverage gap. He said Medicaid expansion will bring $20 million in revenue and $640,000 in taxes to the county along with around 300 jobs.

“There is no rational rationale to not expand Medicaid,” Goodwin said.

The final pillar Goodwin discussed was the people of North Carolina.

“There has been an assault on our voting rights, our civil rights and our women’s rights,” Goodwin said. “There must be leaders in this state who will stand up protect our citizens’ right to vote.”

He called for an independent redistricting commission to redraw district boundaries to ensure fair representation no matter which party controls the General Assembly.

Richardson then discussed the need to re-elect Democrats at nit only the federal, but also the state and local level.

Goodwin and the other visitors then heard the issues important to Personians, including hemp and Medicare expansion.

After the meeting, Goodwin sat down with The Courier-Times. He explained that the listening tour originated as an outreach effort for the state’s rural areas.

“To me, whether it is a large crowd or a modest crowd, residents of rural communities just want to be heard,” Goodwin said. “We’ve touched on a number of issues that you wouldn’t hear in urban areas. Often you’re hearing about a growing rural-urban divide, but we need all of North Carolina to prosper instead of the growing divide we’re seeing.”

Goodwin said that oftentimes, moral issues have become the focus, but for rural areas, pocketbook issues need to be discussed more.

“A rural listening tour is vital if we’re going to listen to the concerns that Person County has,” Goodwin said. “We talk about industrial hemp, how to improve access to a good education, ensuring a tax base to address infrastructure issues — the things we’re discussing are pocketbook issues, not the moral issues that have become the focus.”

Inside Elections on NC Senate Race: “The GOP Primary Is Well Underway” & “Trump’s Endorsement Didn’t Undo The Damage” For Tillis