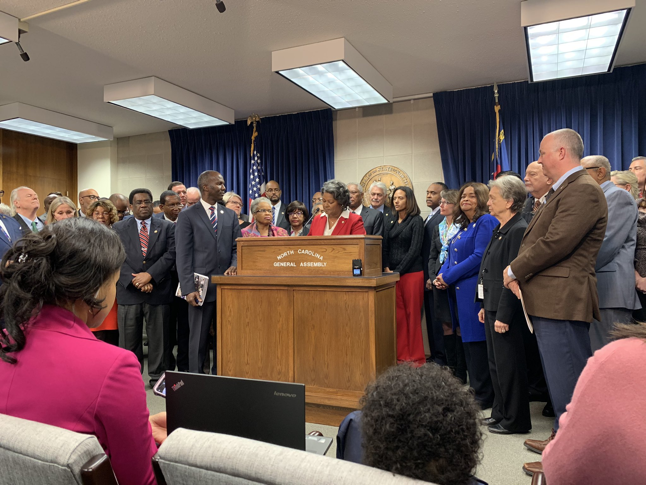 “In 2018, we knew that every Democrat we elected to the General Assembly was one more vote for Medicaid expansion and one step closer to getting health care to over a half a million North Carolinians,” NCDP Chairman Wayne Goodwin said. “This has been our priority from day one because affordable health care should be a right, not a privilege. We are proud to stand behind legislative Democrats as they propose this commonsense, fiscally responsible legislation that will ease a massive burden for hundreds of thousands of people across our state.”

Expanding Medicaid will make health care more affordable for hundreds of thousands of people in North Carolina. Over 500,000 North Carolinians would gain access to affordable health care coverage if this proposal passed, easing a huge burden on working families, low-income individuals, and 23,000 veterans across our state.

This isn’t just a health care issue. Expanding Medicaid is fiscally responsible. It will boost our economy by creating 43,000 jobs in North Carolina and the costs will be overwhelmingly paid for by the federal government.

Rural North Carolina serves to benefit the most from Medicaid expansion. Expanding Medicaid will boost rural economies and keep the doors open at rural hospitals. Since 2010, five rural hospitals have closed in North Carolina and many others are struggling to make ends meet leading to cuts in vital services. But rural hospitals located in states that expanded Medicaid are 84% less likely to close. These hospitals are both a vital source of health care and jobs in rural communities, and we must protect them.

Finally, expanding Medicaid is the single most important thing we can do to combat the opioid crisis. By increasing access to quality addiction treatment and mental health services, Medicaid expansion can significantly aid opioid addiction recovery. In Dayton, Ohio, opioid deaths fell by more than 50% largely thanks to closing the coverage gap.