House Republican leaders cowardly refused to vote on whether to sustain Governor Cooper’s veto on an anti-choice bill Monday night, despite every Republican member being present. When they realized they couldn’t override the veto, Republicans shelved the bill forcing the rest of the legislature, including Rep. Sydney Batch who is recovering from intensive breast cancer surgery, “to return day after day until they have the numbers.”Batch, who is “tough as nails,” reported for duty Monday night despite planning to take three weeks off to recover from the surgery. Batch told Talking Points Memo:

“When I realized that Monday, [Republicans were] planning to hold the vote it was worth physical sacrifice and pain to come in to vote. It was extremely important for me to vote.”
.
Rep. Clemmons and Leader Jackson said Batch was “in pain and visibly shaking when she showed up for the last few House sessions.” Speaker Moore’s response?
.
“All they have to do is be here to do their job.”
.

Last year, North Carolinians voted to break the Republican supermajority and return veto power to Governor Cooper. Now, instead of listening to the will of the people, Republicans are playing political games without regard for how it impacts the health and well-being of their colleague.Their cowardice is all the more obvious in the face of Sydney’s strength.

Hundreds of North Carolinians rallied against the extreme abortion bans passed in states across the South and Midwest. NC’s protests and the more than 500 rallies held across the country this week show that Americans support reproductive freedom, not assaults on reproductive rights.
Huffington Post:

NCDP Chair Wayne Goodwin went on Capital Tonight this week to remind North Carolinians that the North Carolina Democratic Party is a big tent party that reflects the values and diversity of our state.
WATCH the episode HERE: 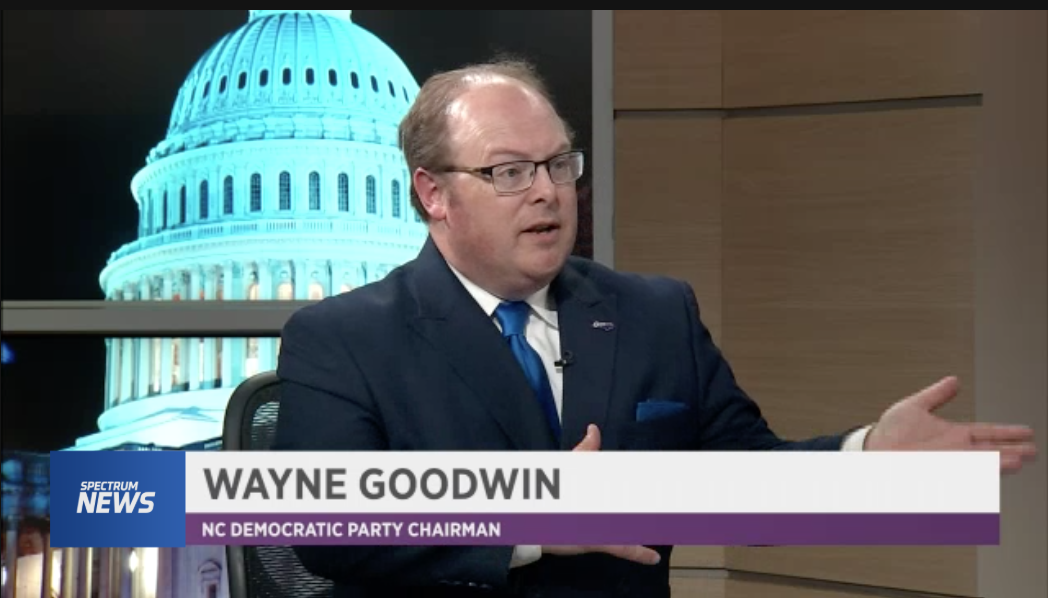 North Carolina Democrats have continued to reach out to all North Carolinians, advocating for the kitchen-table issues that unite us: more jobs, better paychecks, quality public education, clean water, and affordable health care.The results speak for themselves. In 2018, Democrats flipped 11 Trump districts and broke the Republican supermajority by running quality candidates, including moderates, who fit their district.

Washington Republicans are panicked about Senator Thom Tillis’ reelection chances – and they’re not hiding it well.Barely a week into his primary fight and Senator Tillis is already calling in help, forcing the Vice President to come to North Carolina to “rescue” him from a “disruptive primary [that] could wreak havoc” on the full ticket. On Wednesday, Washington Republicans announced plans to “carpet bomb” his challenger, Garland Tucker, one day after they forced a top advisor to cut ties with Tucker and less than a week after they launched attack after attack on Tucker that each landed with a thud.

This week’s rescue mission is nothing more than Washington Republicans paying back Senator Tillis for losing his spine and choosing their interests over North Carolina on issue after issue.

EDITORIAL: “THOM TILLIS IS NO FRIEND OF THE LGBTQ COMMUNITY”

The Charlotte Observer Editorial Board blasted Senator Thom Tillis for his record on LGBTQ rights after American Unity Fund praised Tillis as “a pro-LGBTQ Republican.” From the editorial:
“Time after time, when the LGBTQ community has faced the pain of public discrimination in North Carolina, Tillis has either been silent or an active participant in that pain.”
The Observer goes on to lay out Tillis’ record on LGBTQ issues:
Charlotte Observer:

Governor Cooper signed an executive order giving approximately 56,000 North Carolina state employees up to eight weeks of paid parental leave. This is a huge step for our state and will help thousands of parents with the transition of welcoming a new child into their family.
News & Observer:

On the GOP’s assault on reproductive freedom…

CBC:
“North Carolina may not be in the eye of the swirling national storm over restricting and abolishing abortion, but it is not from lack of trying. Efforts to override Gov. Roy Cooper’s veto of the “abortion survivors protection act” are on life-support in the state House of Representatives. Speaker Tim Moore keeps shuffling the bill on and off the calendar, hoping to manipulate consideration to a time when enough veto sustainers are absent. The bill is not necessary and is more about politics.” 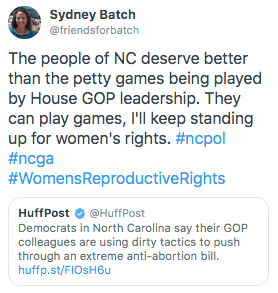