Raleigh – Republicans’ closing message to North Carolina voters in the final week of the campaign is increasingly about stoking division and fear, as Republican candidates, led by President Trump, lean fully into a culture war and racist dog-whistles to scare their voters. Meanwhile, Democrats have been speaking to the two issues most important to voters this cycle: health care and public education.

“In the closing week of the campaign, Republican candidates, from our highest court to Congress and the state legislature, are lined up behind their president and running on messages of fear, division, and hate,” NCDP Executive Director Kimberly Reynolds said. “Senator Wade, Justice Jackson, and Republicans across the state should be ashamed for stoking unfounded hysteria and fear to scare voters to the polls. The closing messages facing voters couldn’t be starker: Republicans are playing into the worst of us, Democrats are offering to build a healthier state with better funded schools.”

Here’s a short collection of Republican messages to voters:

SD-27: Sen. Trudy Wade
Senator Trudy Wade’s closing ad is a fear-mongering message focused on asylum seekers more than 1,000 miles from the U.S.-Mexico border. The ad then ties the asylum seeks to the voter ID constitutional amendment, closing, “only YOU can stop THE MOB.” Arrests for illegal border crossings hit a historic low recentlyand only one ballot out of more than 4 million cast would have been prevented by a voter ID, but the message is clear: people of color and immigrants are coming to illegally vote. 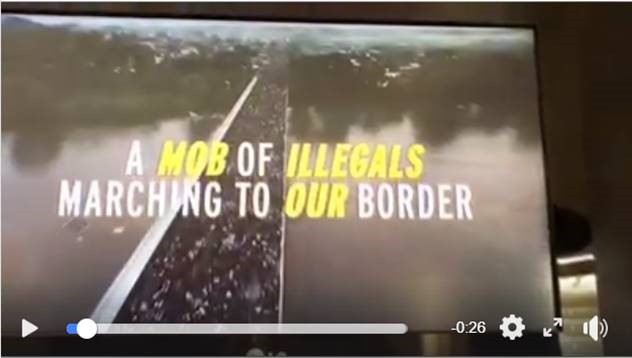 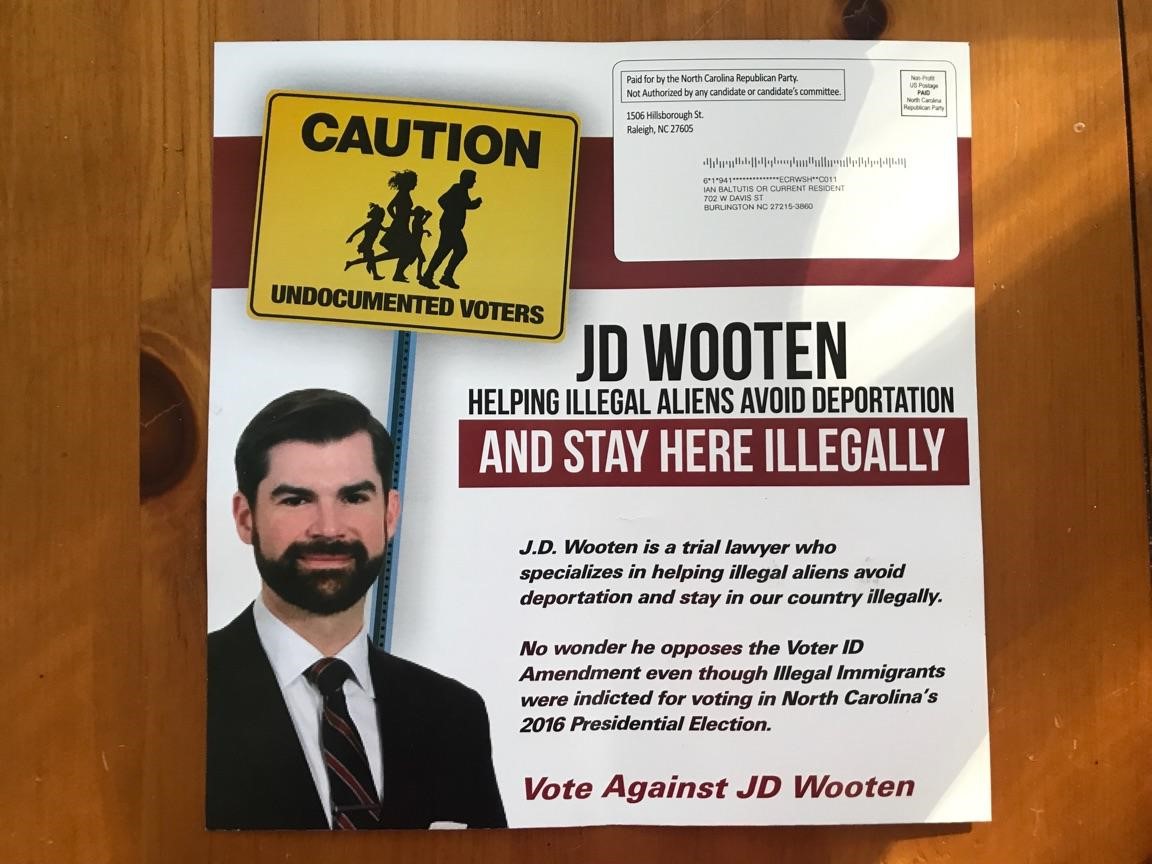 SD-1: Bob Steinburg
Rep. Bob Steinburg and Justice Jackson are running an ad attacking Democratic supporter and Jewish-American George Soros, claiming that “Soros and the radical left” are trying to take over the North Carolina courts. Soros, a common stand in to blame Jewish outsiders for dissent and social unrest, was recently targeted in an assassination attempt before a shooter shot up a Pittsburgh synagogue in the deadliest attack on the Jewish community in American history. Steinburg’s ad is still up. 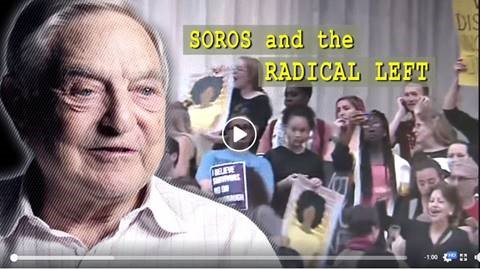 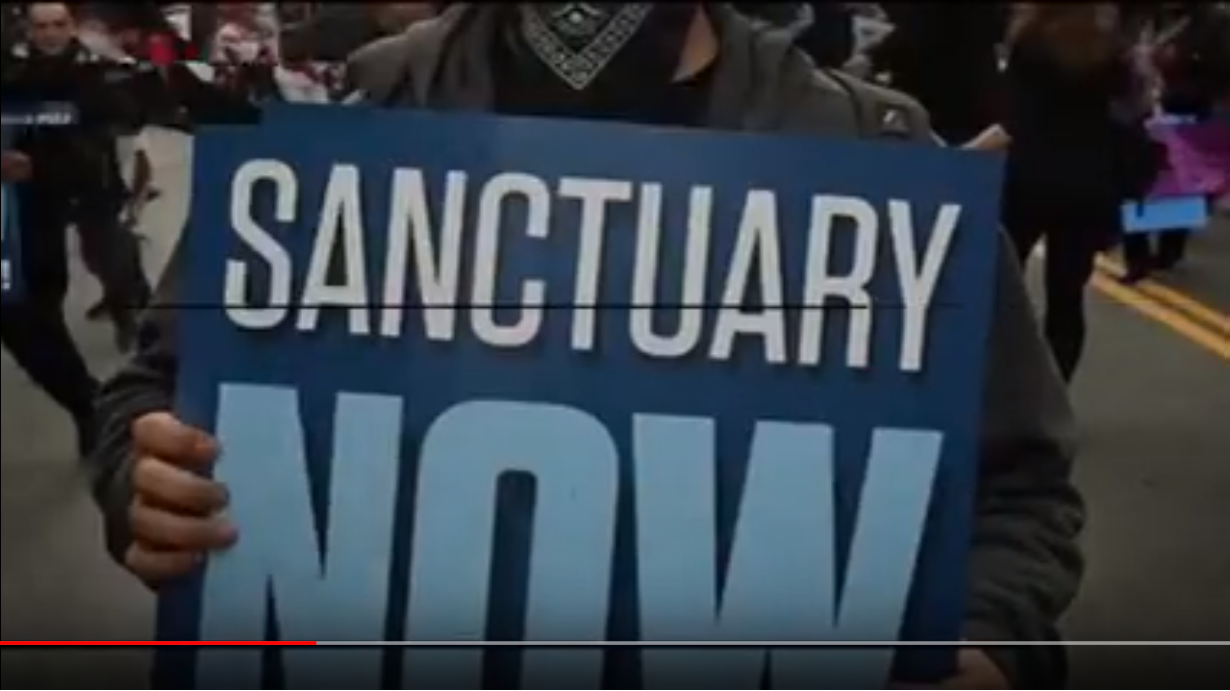 HD-36: John Adcock
John Adcock revived Jesse Helm’s racist 1972 campaign slogan, “One of Us,” which was used by Helms’ as a “slur” against his opponent’s heritage. Adcock is running against African-American family law attorney Sydney Batch. 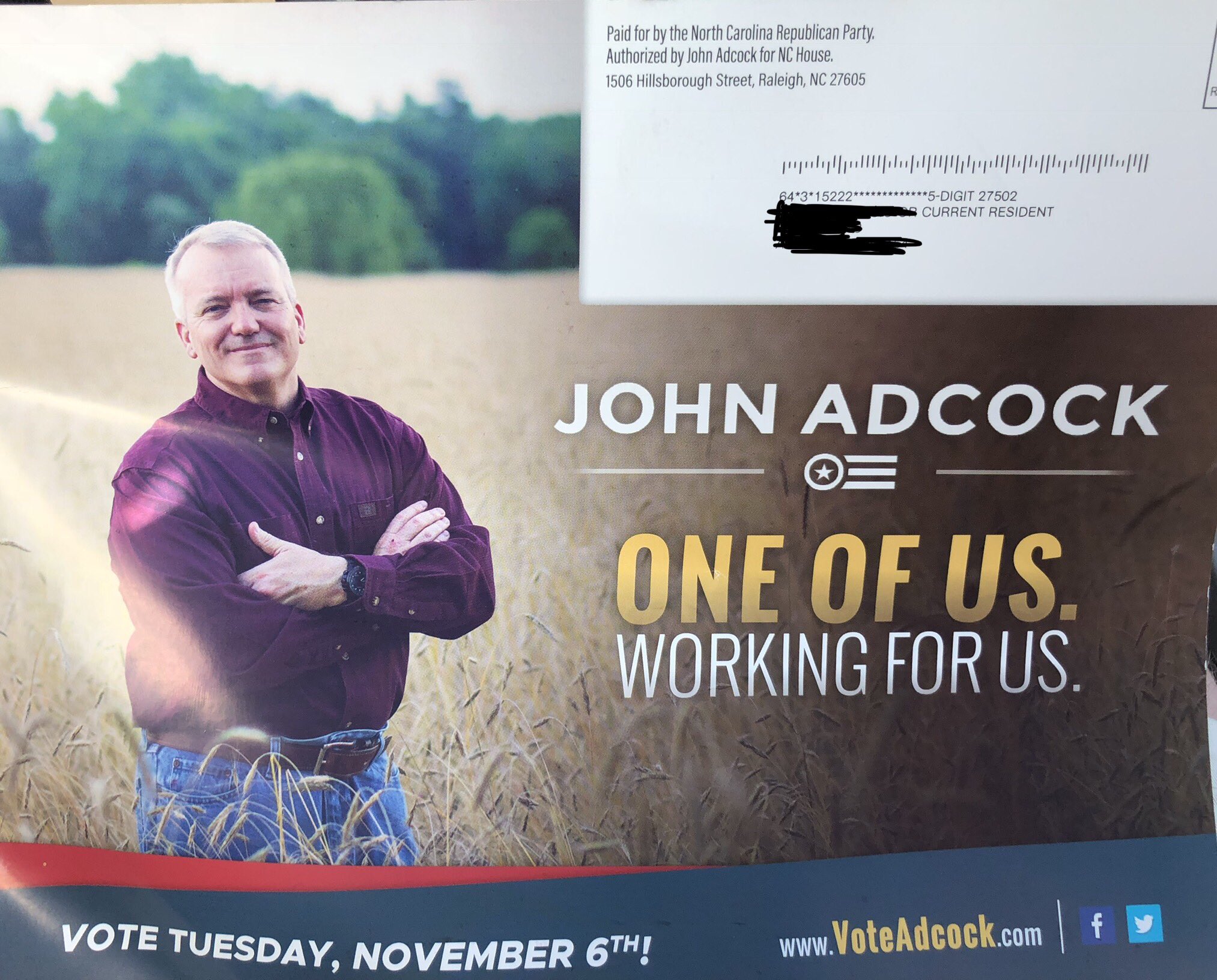 NCGOP’s Closing Slogan
The Republican Party’s closing slogan to voters – “Jobs Not Mobs” – fans the flames of bigotry. NC GOP Vice Chairwoman Michelle Nix recently posted an image “which features the slogan ‘jobs not mobs’ and represents the Republican Party with a white ‘OK’ hand gesture that has recently been appropriated by some white supremacists, while the Democratic Party is represented by a dark-colored fist similar to a design used by the Black Panther Party.” 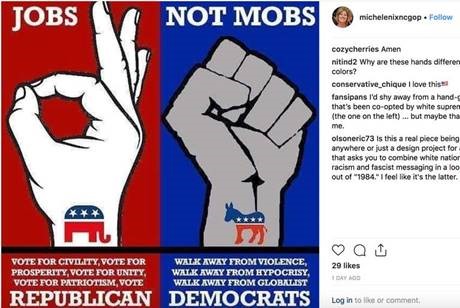 These dog whistles and fear-mongering messages have serious consequences. Cesar Sayoc, the postal bomber targeting Democrats and President Trump’s opponents, including Soros, “appeared to be obsessed with Soros,” according to the Washington Post. The Pittsburgh shooter was not only anti-Semitic but anti-immigrant, attacking refugee resettlement agencies like The Hebrew Immigrant Aid Society.
Yet, through it all, Republicans are still running on this message.Democrats Run on Health Care and Public Schools
Meanwhile, Democrats are speaking to the two issues at the top of voters minds: health care and public education. Here’s just a few examples of Democrats’ message to voters:

HD-37: Sydney Batch
“I’m running for the legislature to change that – to stand up to insurance companies that raise premiums or try to deny coverage for preexisting conditions. To me, health care has always been important; now, it’s personal.” 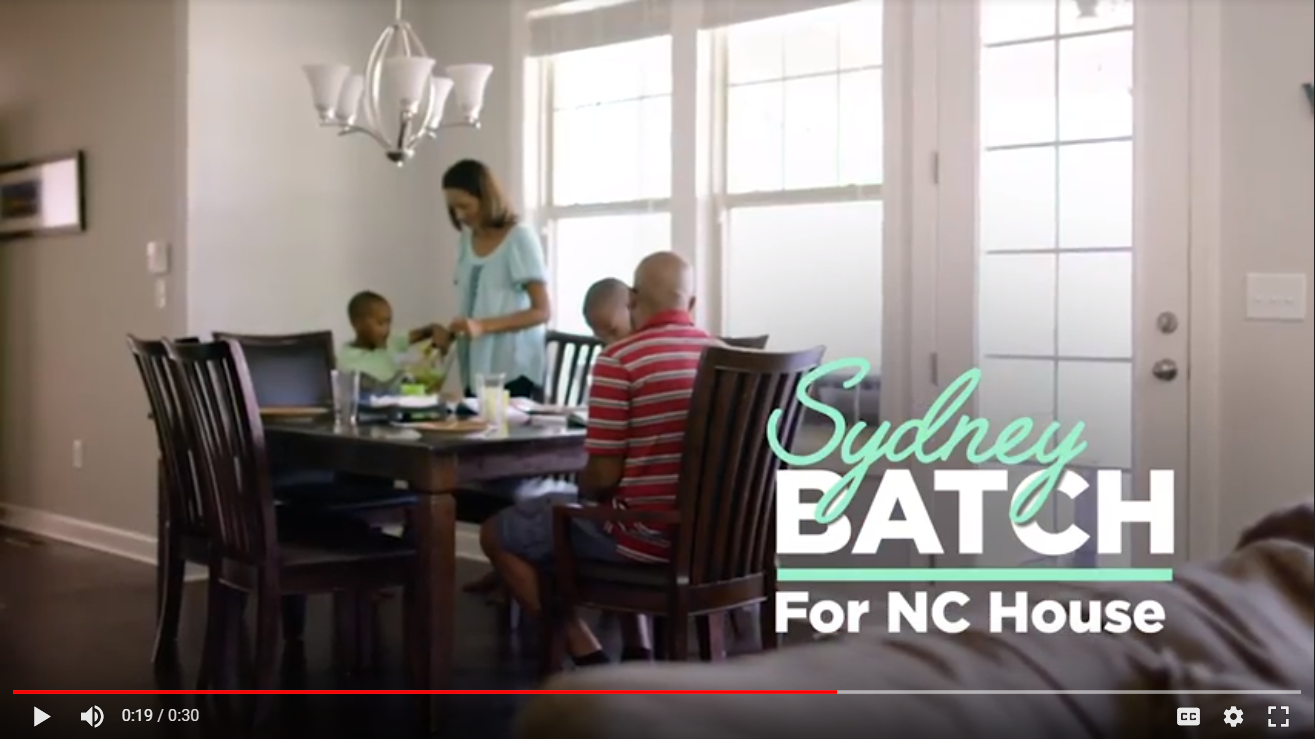 HD-93: Ray Russell
[When knocking on doors, Russell asked a woman what mattered to her.] “She just cried. It took her a long time to get anything out. She said, you know, I’m not a dead beat. I’ve worked all my life since I was 14 years old. And I have to choose between my asthma medicine and eating. That woman is why I’m running for this position.” 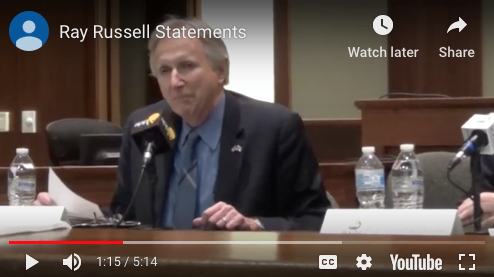 HD-9: Kris Rixon
From the Daily Reflector: “Rixon held a campaign event on the steps of the Pitt County Courthouse on Saturday to push for Medicaid expansion … If Medicaid is expanded more than 600,000 North Carolinians will have health insurance, Rixon said. The additional money would stabilize rural hospitals which treat many uninsured patients and it would provide a long-term solution to fighting the opioid epidemic, he said.” 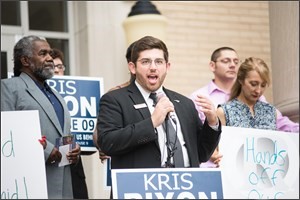 SD-19: Kirk deViere
“Everyone deserves a chance to succeed no matter what zip code you’re from. That’s why I’ll fight to give schools more resources and raise teacher’s pay.”
WATCH the video HERE: 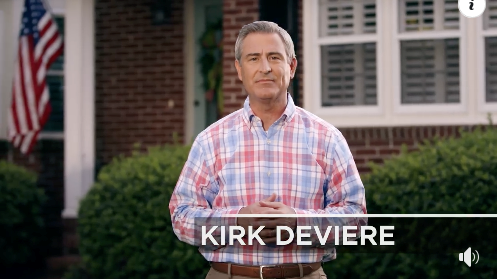 HD-74: Terri LeGrand
“We need to make sure that every child in North Carolina has access to quality Pre-K education so that they can have an opportunity for success in the future.” 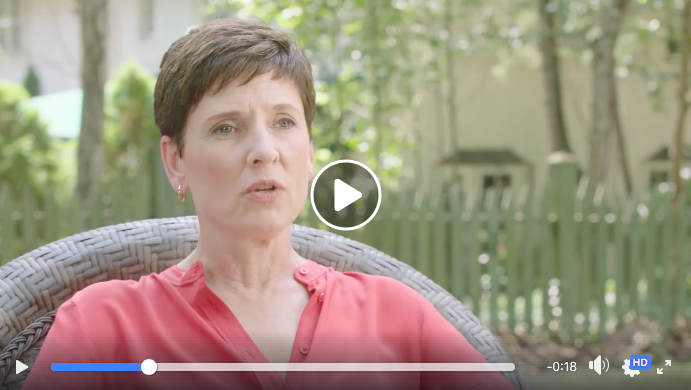