Raleigh — A pair of bombshell reports from the New York Times and The Guardian have exposed the work of Republican data firm Cambridge Analytica to steal Facebook users’ personal information to target American voters. The firm, previously run by Steve Bannon, received hundreds of thousands of dollars from Thom Tillis and the North Carolina Republican Party in 2014 to harness their “unique data-rich voter file…to build psychographic profiles for all voters in North Carolina,” according to a case study on the Tillis campaign on Cambridge Analytica’s website.

The reports detail how Cambridge Analytica employed a Russian-American named Aleksandr Kogan who is “an associate professor at St Petersburg State University, taking Russian government grants to fund other research into social media.” Kogan began working for the firm in June 2014 to harvest Facebook data under false pretenses for Cambridge Analytica to use in the mid-term elections.

In 2014, the Tillis campaign paid Cambridge Analytica $30,000 and the NCGOP paid them $150,000 per the Federal Elections Commission. Congressman Patrick McHenry’s campaign also paid the firm $15,000 in 2014. NCGOP spent another $65,000 with the firm in 2015.  Kogan’s work with Cambridge Analytica started just one month before NCGOP’s first payment to the firm.

In summer and fall 2014, Cambridge Analytica dived into the American midterm elections, mobilizing SCL contractors and employees around the country. Few Americans were involved in the work, which included polling, focus groups and message development for the John Bolton Super PAC, conservative groups in Colorado and the campaign of Senator Thom Tillis, the North Carolina Republican. 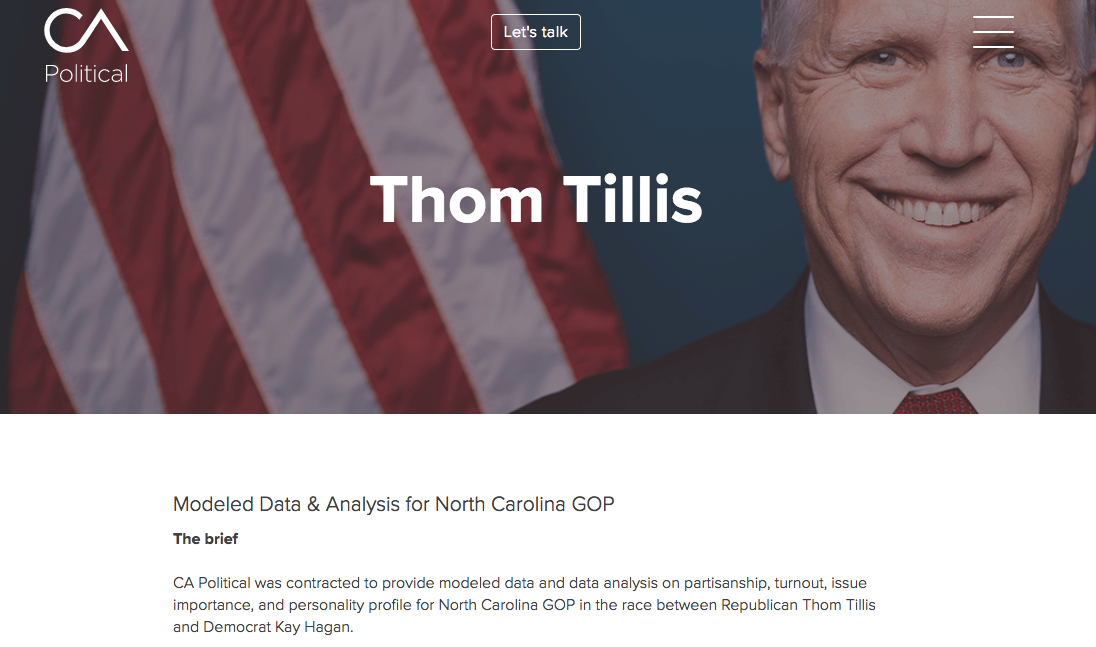 “These new reports raise serious questions about connections between Thom Tillis, the North Carolina Republican Party and a firm that has ties to the Russian government that has stolen American’s private data to influence elections to help Republicans,” said Kimberly Reynolds, Executive Director of the North Carolina Democratic Party. “Tillis and the Republican party have paid this firm hundreds of thousands of dollars, which raises serious questions about whether North Carolina in 2014 was the testing ground for Russian meddling in the 2016 election. What did Senator Tillis and the NC GOP know about the tactics used by this shady firm, including the potentially illegal work done by foreign nationals to influence North Carolina’s 2014 U.S. Senate race?”