In an interview about the special election in North Carolina’s third congressional district, North Carolina Republican Representative and Freedom Caucus chair Mark Meadows took “an unprompted dig” at Senator Tillis, using him to attack a Republican candidate running in the special election, saying the candidate “sided with Thom Tillis and the Democrats against the President of the United States on securing our border.” 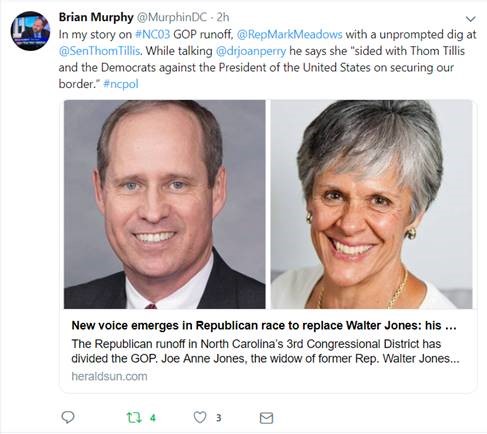 That comes on the heels of the newly elected Republican Party chair refusing to publicly support the incumbent Republican senator, calling his primary a “great opportunity.”

If his problems with base Republican voters weren’t clear enough, the leading right-wing representative in the state shoehorning an attack on Tillis into an unrelated interview certainly makes it crystal clear.

“I Did My Job … We Need Our Politicians to Stand Up.” Why Hasn’t Senator Tillis Signed on to 9/11 Responders Bill?