Raleigh – North Carolina Republicans elected a new party chairman this weekend after a bribery scandal brought down the previous chairman, but behind the scenes, Senator Thom Tillis was experiencing his own heartburn with Republican activists and voters.

First, the Charlotte Observer reported that wealthy conservative businessman and Republican primary challenger Garland Tucker “has been working delegates today,” and that support between Tucker and Senator Tillis was “split.”

Then, WXII reported that the “interparty squabble for the U.S. Senate seat held now by Thom Tillis” was “getting a lot of buzz here at the party convention.” WXII then interviewed Rep. Mark Walker, who refused to rule out running against Senator Tillis. (Rep. Walker reportedly was also running digital ads this weekend targeted to the county that hosted the party’s convention.)

The North Carolina Republican Party is “at a low point” – reeling from a bribery scandal that brought down the former state party chairman, an electoral fraud scandal that revealed a coordinated Republican attempt to steal a congressional election, and a string of high-profile electoral defeats.

Now, the GOP “faces a potentially divisive Senate race” that threatens to splinter Republican voters while the state party’s own apparatus is “in disarray.” 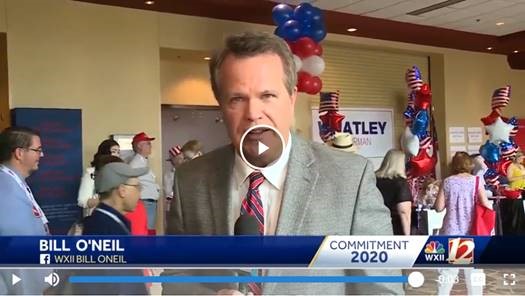 Charlotte Observer: After a rocky few months, NC Republicans look for a new start at convention
By Jim Morrill
June 6, 2019