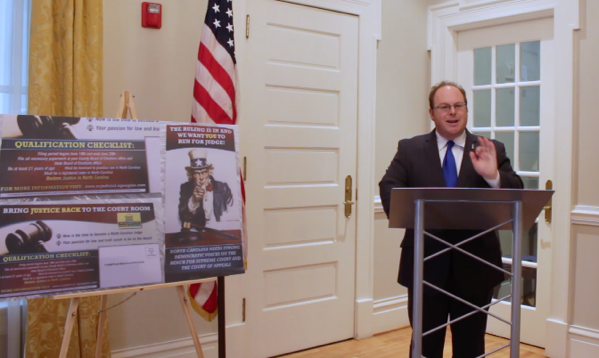 Raleigh – This morning, the North Carolina Democratic Party held a press conference to announce it will file a complaint against the Alliance for Fairness in Justice, a dark-money group led by former NC House Republican Caucus Director Jim Burton, for interfering with Democratic judicial candidates and elections. Read the full complaint here.
“A free and fair judiciary independent of partisan politics is fundamental to our Democracy,” said NCDP Chair Wayne Goodwin. “That begins with fair elections free from dirty political tricks – elections based on principles and values, not how can one side best rig the contest in their favor. North Carolina Democrats will continue to fight for an independent judiciary elected by the will of the voters.”

The Alliance for Fairness in Justice is a Republican dark-money, front group created less than two weeks ago and run by the former Director of the North Carolina Republican House Caucus. The group sent deceptive mailers over the weekend encouraging Democratic attorneys to file for judicial office – specifically the NC Supreme Court and the NC Court of Appeals. The North Carolina Democratic Party has already publicly and officially endorsed a slate of diverse and qualified judicial candidates.

This is a blatant attempt to mislead Democratic voters and encourage fringe candidates to run to split the Democratic vote. NC Republicans have taken extreme measures, including cancelling judicial primaries, to rig our judicial elections because they are terrified of November’s election. 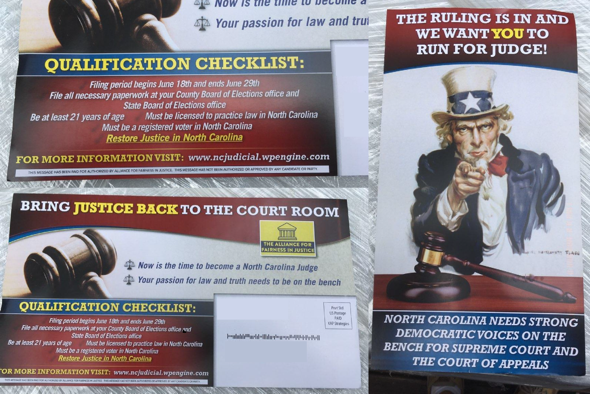 “We need a bipartisan group of leaders to stand up and say – keep the dirty political tricks and dark money front groups out of our elections,” NCDP Chairman Goodwin said. “North Carolina Republican Party Chairman Robin Hayes must denounce this group and its tactics today. Justice Barbara Jackson must denounce this group today. And the endorsed North Carolina GOP appellate court candidates – Judge Andrew Heath, Judge Jefferson Griffin, and attorney Chuck Kitchen, as well as Republican Judge Sandra Ray – must join them in denouncing the action of that dark money group today. Anything less than a total denunciation amounts to an endorsement of these dirty tricks and tactics.”

Sen. Hise Pushes to Undermine the Ethics Agency Responsible for Investigating Ethics Complaints Against Him