America’s most vulnerable senator Thom Tillis wants Republicans to resurrect the failed 2017 healthcare plans he pushed that would gut protections for preexisting conditions and raise premiums for North Carolinians.
Tillis: “If you look at the proposals we were cycling through when we were on the brink of repealing Obamacare, it’ll be probably those…”
Politico:

#TBT to the last time Tillis made this push because his fundraising had “fallen off a cliff”
New York Times:

On the heels of his bright idea to resurrect disastrous 2017 health care plans, Tillis reintroduced the “Protect Act.” It’s clear though that the only thing it’s meant to protect is vulnerable senators like Tillis.

As the LATimes editorial board rightly pointed out, Tillis’ bill is “really about protecting Senate Republicans from the stink caused by the Trump administration’s efforts to repeal the Affordable Care Act, also known as Obamacare.”
Los Angeles Times:

TILLIS ON THE WRONG SIDE OF COASTAL NC

Senator Tillis voted to confirm oil lobbyist David Bernhardt as the new Secretary of the Interior, selling out coastal Carolinians, local economies, and our pristine beaches in favor of an a former oil lobbyist intent to open up the North Carolina coast to offshore drilling – despite the fact that hundreds of North Carolina businesses and organizations have come out against offshore drilling.
The Hill:

NCDP Chairman Wayne Goodwin and Winston-Salem City Councilor D.D. Adams called out Republicans for their overreach…
“Without concern from the public or input from city councilors, Republican legislators took it upon themselves to try and gerrymander Winston-Salem’s city council seats for partisan, political gain. This unnecessary and harmful proposal will hurt diversity on the council and diminish the voices of Winston-Salem’s residents. We urge lawmakers to reject it.”

Republicans plan to give teachers $400 each to spend on classroom supplies has a catch: there’s no new funding. Instead, it rearranges current funding to paper over bigger concerns.

“The initial call, when they called me and said, ‘We’re going to be giving teachers $400,’ and I was like, ‘Wow, that’s amazing.’ So, yeah, that was excitement, but that was surface level excitement. I was under the assumption that it was new money, that the $400 was on top of what the district would already be getting, which is something I’ve been advocating for.”
False promises. Deceiving teachers. Burdening underfunded school systems. Sadly, this isn’t anything new for NC Republicans.
WRAL: 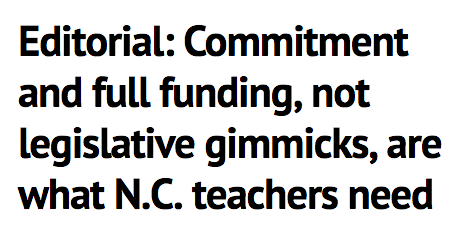 Early voting is underway in the third congressional district, and NC Democrats are hard at work getting their message out to voters.
WATCH Richard Bew’s Ad Here: 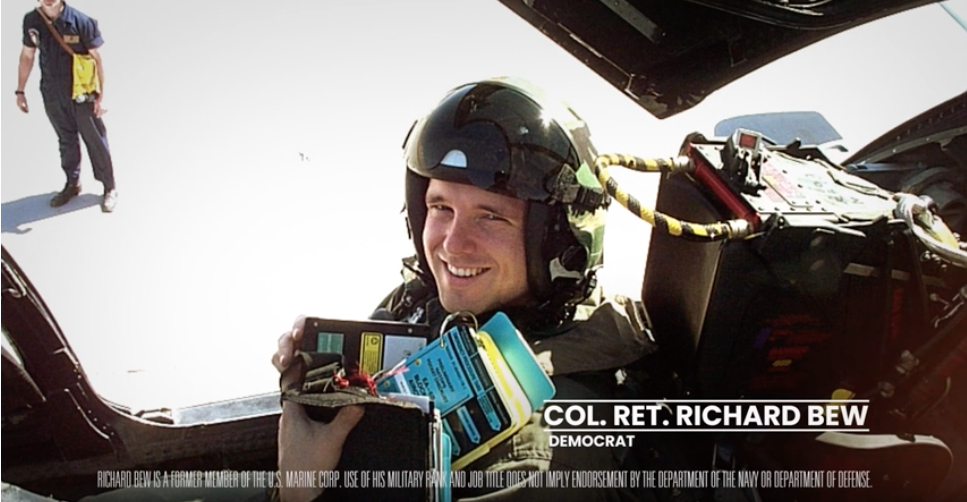 Meanwhile, over in NC-09, Democratic candidate Dan McCready announced his campaign raised a hefty $1.6 million in the first quarter.
WRAL:

Winston-Salem Journal
“We expect more from those we place in positions of leadership and it’s disappointing, to say the least, when we find their feet are made of clay. It’s a failure that resounds more fully for the state Republican Party in the wake of the recent ballot-harvesting charges against Republican operatives that have led to tossing out election results and calling for a new election in the state’s 9th Congressional District.”

Charlotte Observer
“It’s part of a pattern of Republicans proposing new education initiatives or grand education improvements, such as teacher pay, without paying for it properly. If Superintendent Johnson and other Republicans want to improve school supply funding, they could talk to school districts about why they’re forced to make accounting maneuvers to maximize their textbook purchasing. They could talk to teachers about the best way to help them meet their classroom needs. Or, just maybe, they could simply give them more money for supplies.”

WRAL
“Twisting the truth doesn’t make private school vouchers a more worthy government program. Allowing the program to become a slush fund where tens of millions of education tax dollars sit idle is irresponsible. If Phil Berger and his fellow legislative leaders truly cared about the state’s school children and accountability, they would praise and thank Marcus, Searcy and Nickel for their diligence and concern. They’d also apologize for their misdirected scorn and mockery.

WRAL
“Speaker Moore and his fellow Republicans unabashedly admit they want to make it difficult, if not impossible, to vote out as many Republicans as possible. Voters can’t “fire” anyone in rigged districts. An independent commission, drawing district lines without regard to previous elections or political affiliation, would make it EASIER for voters if they wanted to “fire” elected officials they didn’t feel are responsive to their concerns.”

Tillis Put School on Military Base Trump, Pence Will Tour on Chopping Block