GOV. COOPER & STATE OF THE STATE

On Monday, Governor Roy Cooper outlined his goals for the next two years. The theme of his second State of the State address? Determination.

“The storm showed us it’s also time to come together to meet other challenges that people face every day across our state. And we have to bring that same determination to every challenge.”

Citing how North Carolinians came together to rebuild communities after Hurricane Florence, the Governor said he’s determined to work across the aisle to put his proposals into action. His top priorities?

This week, the North Carolina Democratic Party launched the “Community Conversations” series, connecting legislators with the voters they represent at events in local communities across the state. The series kicked off in Alamance and Guilford counties where Reps. Meyer, Clemmons, Hawkins, Quick, and Harrison and Sens. Robinson and Garrett spoke with the crowd about the necessity of expanding Medicaid. 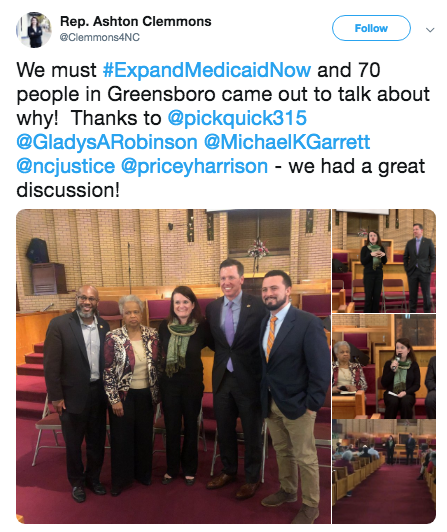 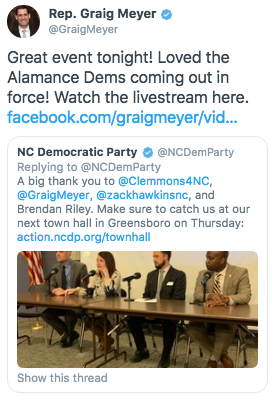 TILLIS DISTANCES HIMSELF FROM TRUMP WITH TOUGH ELECTION AHEAD

Thom Tillis is talking out of both sides of his mouth this week trying to protect his political future. In an op-ed in the Washington Post, Tillis wrote that he would vote to block Trump’s national emergency declaration. This is a convenient 180 from the guy who, less than a year ago, stood at a rally in Charlotte and said he would support every policy priority from President Trump. 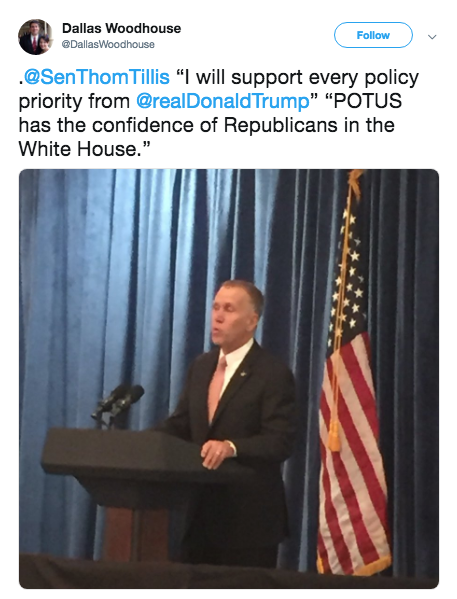 Tillis is the most vulnerable senator in the country – and he knows it.

Now he’s desperately trying to distance himself from an unpopular president to save his own skin – too bad no one’s buying it.

Mark Harris saw the writing on the wall this week and announced he won’t run in the ninth district special election. But that won’t save the eventual Republican nominee from being tainted by the GOP’s efforts to steal an election.

So far, the Republicans have yet to land a good recruit. Meanwhile, Harris’ endorsement is gaining national headlines for his far-right policies and general ridiculousness.

Strong Dems are lining up to run in the third district:

MARK MEADOWS’ COMMENTS ARE NOTHING NEW

When confronted with the reality of his racist actions and comments at the Cohen hearing this week, Rep. Mark Meadows nearly burst into tears. But his behavior shouldn’t be a surprise from the man who put birther conspiracies in his 2012 talking points … 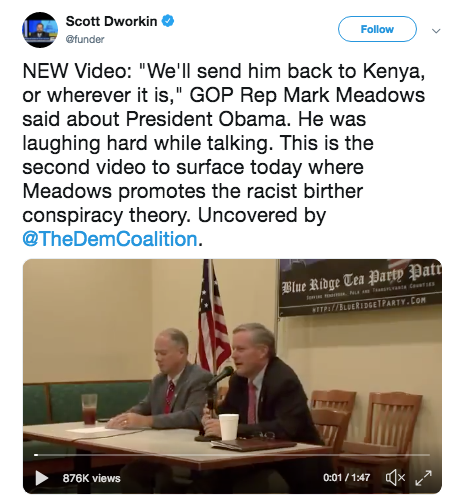 WHAT EDITORIAL BOARDS HAVE TO SAY THIS WEEK

On NC-09…Fayetteville Observer:
“Republicans face a daunting task in preserving the 9th as a GOP seat. The party has embarrassed itself with overreach at times as it fought to preserve Harris’ victory in the face of mounting evidence of wrongdoing. Reclaiming credibility will be a challenge…”

Washington Post:
“It seems pretty clear that until Harris had to reckon with his son’s testimony about warning him to stay clear of the dubious Dowless, he was willing to ride his shaky 905-vote lead over Democratic candidate Dan McCready to a seat in Congress. Going along on that ride was a Republican Party establishment willing to look the other way at voter fraud as long as it worked to the party’s political advantage. It’s fortunate that election officials — with the help of on-the-ground reporting from local media — uncovered a scheme that was a blatant offense to democracy.”

Winston-Salem Journal:
“We can’t help noticing that the “voter fraud” crowd has been mostly silent during these proceedings, both locally and on a national scale. For sure, this was election fraud, not voter fraud, but it was an organized and willful effort to tamper with ballots, and it’s wrong no matter which party attempts it.”

On Gov. Cooper’s State of the State …

Fayetteville Observer:
“Cooper’s big push Monday evening was for initiatives that should have been complete by now: better funding for public education, expansion of Medicaid, improved broadband access in rural areas and stepped-up aid for victims of Hurricane Florence. All those things should have bipartisan support. And in fact, that’s beginning to happen.”

WRAL:
“Legislative leaders may want to quibble over the implementation details but there should not be any disagreement with the priorities Gov. Roy Cooper laid out in his second State of the State address Monday.”