Balance is headed back to Raleigh! North Carolina Democrats launched this cycle with one goal: break the Republican supermajority. We accomplished that in both chambers this week. 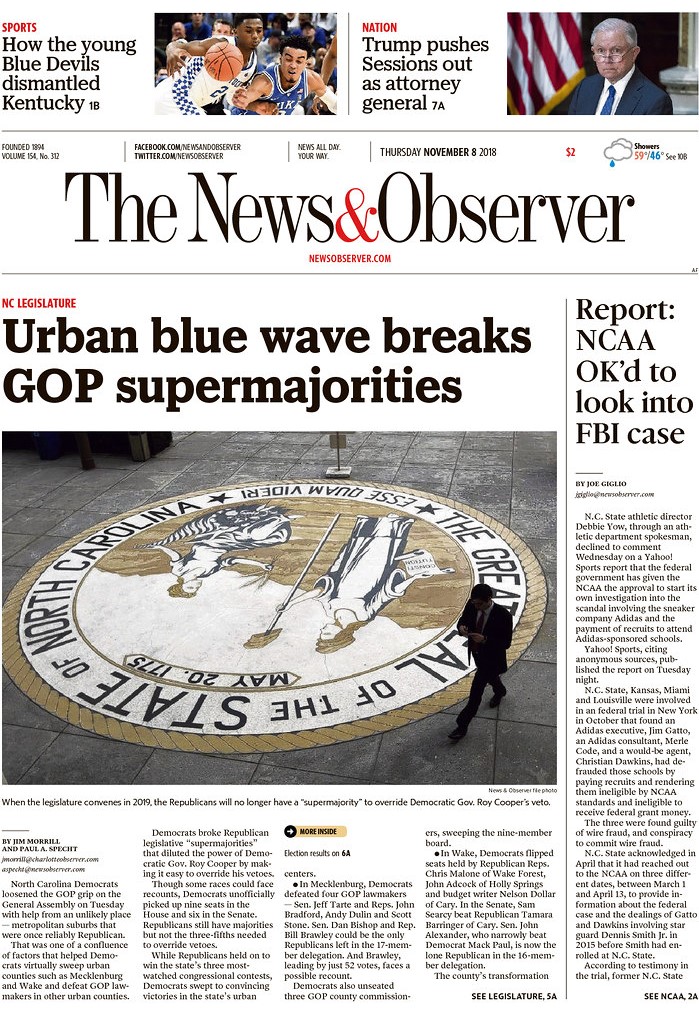 Democrats were successful in a once Republican stronghold: the suburbs. These suburban voters largely went for Republicans just two years ago, and their shift signals a strong sign that Independents, moderate Republicans, and Democrats are turned off by today’s modern Republican party.NC Democrats broke the supermajority by flipping 10 “Trump districts” – state legislative seats that went for President Trump in 2016. That’s a monumental victory in an era of deep polarization.

Governor Cooper got his veto back and the people of North Carolina got a stronger voice at the negotiating table for a government that will put expanding health care access, cleaning up our waterways, and raising teacher pay before corporate bottom lines. 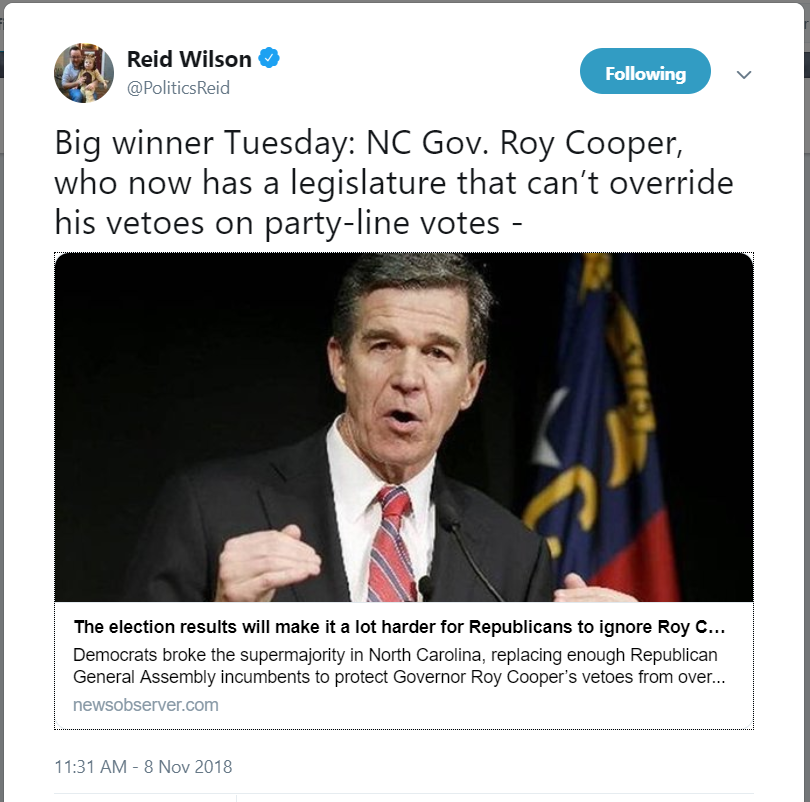 The first step to winning the supermajority was recruiting a slate of quality, diverse candidates from across North Carolina. NC Democrats are thrilled that these candidates are heading to Raleigh.
WLOS 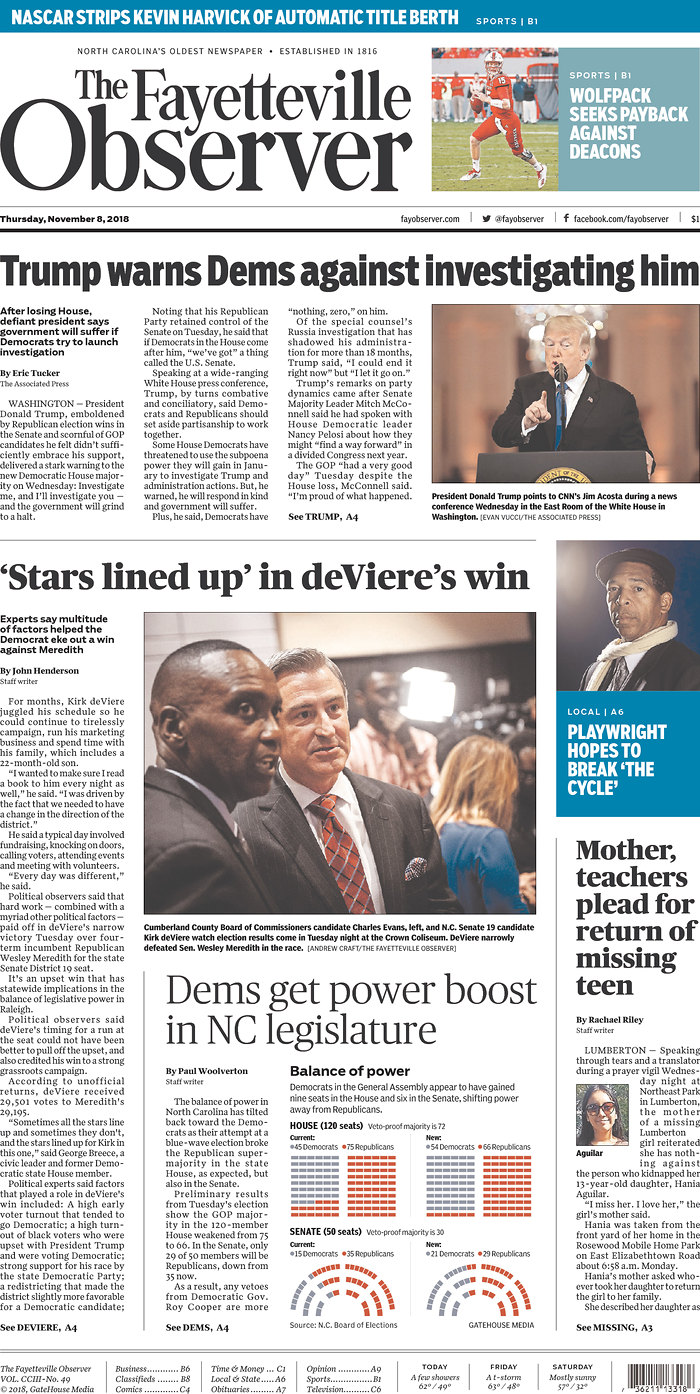 North Carolina Democrats SWEPT statewide judicial races, a victory virtually unheard of during the era of partisan judicial elections. At the top was Anita Earls, whose message of a free and fair judiciary that rules without fear or favor resonated with voters across the state. Anita’s decisive win gives North Carolina Democrats a 5-2 balance on the state’s highest court through 2022 and a crucial check on future Republican gerrymandering efforts.
News & Observer 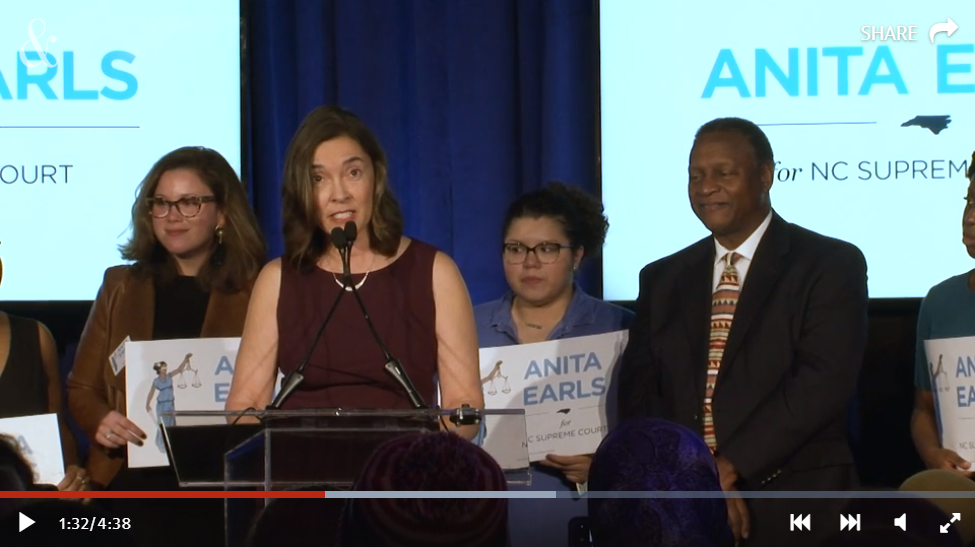 Voters saw through Republican efforts to steamroll our constitution and hold onto power at all costs, resoundingly rejecting the two most dangerous constitutional amendments. It was a bipartisan effort that exposed the worst in this Republican legislature’s thirst for power:“The unsung heroes of this election were the five former governors who played an outsized role in convincing voters to reject two ill-conceived constitutional amendments that would have turned North Carolina’s governor into a glorified ribbon cutter.”

THERE’S A NEW SHERIFF IN TOWN

North Carolina voters elected new sheriffs across the state on Tuesday, signaling a steep shift in immigration policy. In particular, voters across North Carolina this week elected a black sheriff in all seven of the state’s largest counties, bringing a new level of prominence to minorities in law enforcement.These candidates rose to prominence because of a backlash to the harsh immigration policies from Republican elected officials. Many of these candidates objected to hardline immigration policies and appealed to voters who felt forgotten or afraid.
News & Observer

A new coalition, upset with a deeply unpopular president and a Republican party that puts loyalty to that president above the people, drove the high turnout North Carolina experienced this midterm. This governing majority is propelled by women and young people – and sets North Carolina Democrats up for a strong and growing base.
AP

WHAT IS GOING ON WITH TRUDY WADE?

Trudy Wade is debasing herself and her soon-to-be former office, going back on her concession and attacking her opponent for congratulating her on a hard-fought election.First, on Wednesday, Trudy Wade concedes to Fox8 News, saying, “I look forward to returning to full time work with my four legged [sic] friends.”

A day later, Sen.-elect Michael Garrett accepted, saying, “I wish her the best”

Hours later, Wade tried to walk back her concession by attacking Garrettwithout ever clarifying her first statement.

“Trudy Wade continues to show why Guilford county voters rejected her and her disgusting politics. Instead of gracefully exiting public office like she originally had, she went back on her word and hurled one last nasty attack. It’s disappointing to see a soon-to-be former public official debase herself and the office this way.”
WXII

On the election results…

The Fayetteville Observer:
“Although Democrat Roy Cooper captured the North Carolina governor’s office two years ago, the benefits of divided government were denied us until now. The Republicans’ super majority made Cooper’s vetoes meaningless symbols. But when the General Assembly returns to session in January, that game will change. While Democrats failed to retake either legislative chamber, they made strong enough gains that they can block override attempts and sustain the governor’s vetoes. That will force compromise and deal-making, and may even lead to more open government.”

Star News Online:
“…Democrats took control of the U.S. House, nudging the balance of power in Washington from the right back toward the center…The same shift occurred in North Carolina, as Democrats flipped enough seats in the General Assembly to end the Republicans’ veto-proof supermajority”

Charlotte Observer:
“Voters on Tuesday gave America and North Carolina hope, not for Democratic policies, but for a taste of balance, for some checks on unchecked power, for baby steps back to a day when our politics didn’t seem so hopelessly out of control….[b]y taking away Republicans’ command of the US House and breaking NC Republicans’ grip on veto-proof majorities in the legislature, voters sent a message: We as a country had gone too far. So they created conditions in which no one party can steamroll everyone in its path, as Republicans have done in recent years, especially in Raleigh.”

Winston Salem Journal:
“North Carolina Democrats and Republicans agree on the essence of many issues — that elections should be secure…yet somehow they found themselves at odds over who would most effectively deliver those goods and how, while harsh claims about the motives and honesty of those on the other side filled the air.”

Blue Ridge Now
“[V[oter excitement for today’s midterm election has approached that of a presidential election year…[v]oters are being presented with starkly different visions for our country, and unusually tight races in many cases. Rising polarization of the political parties and personalities also is driving interest and passion. The real question is, is this the new normal? Will today set a new benchmark for voter participation? Is civic engagement here to stay?”

TWEET(S) OF THE WEEK 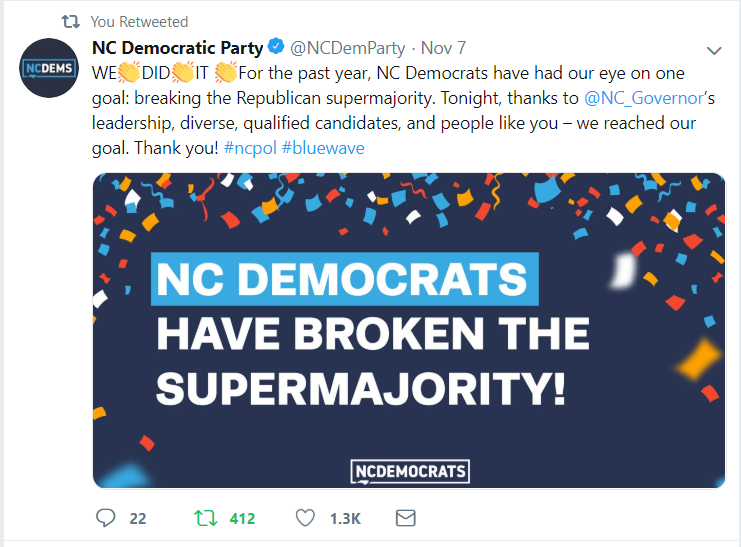 Have a great weekend from one very tired campaign team!