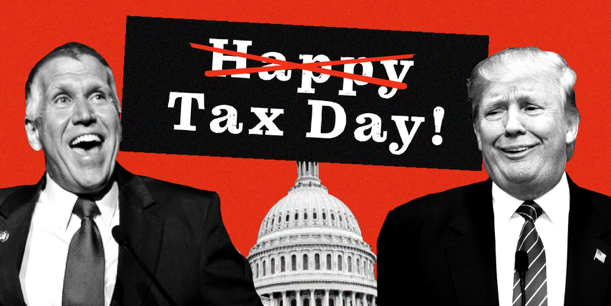 #TBT to when Senator Tillis and President Trump promised the average North Carolinian a $4,000 tax cut. Instead, everyday North Carolinians got slapped with higher tax bills and smaller refunds.

Don’t take our word for it – here’s how North Carolinians said the tax bill affected them:

Small business owner:
“I am from a regular middle-class family in NC and a small business owner (a group who was said to benefit from the new tax code). I just got my taxes done and I am paying over $5000 more in taxes this year for almost exactly the same revenue. The new tax laws are not benefiting the middle class as promised, and in fact, I have heard from many others it is hurting them significantly, as it has me.”

Retired teacher:
“I am a retired teacher. Last year I had to borrow a thousand dollars to pay my taxes. So I saved up $2,400 to cover this year’s taxes thinking that would be plenty since we were given a tax cut. I was shocked to learn that I was STILL $1,124 short. I work two part-time jobs to supplement my pension.”

Middle class family trying to pay for their kid to go to college:
“Thanks to Trump and Tillis, our family will not receive a refund like years in the past. Instead we will have to make monthly payments to pay off the debt we owe to the IRS. This is money we need we our son’s college.”

Retiree:
“I’m retired & on a fixed income. Last year I received a federal refund of $3,400.00. This year I owed the federal government $1,640. So much for helping the average citizen.”

But what else did we expect from former Speaker of the NC House Thom Tillis who protected tax breaks for private jet and golf course owners while hiking taxes for people with medical expenses and working North Carolinians.

This week, the Center for Budget and Policy Priorities shed further light on why Senator Tillis’ so-called Protect Act is “really about protecting Senate Republicans.”

According to the report, the bill “falls far short of its purported goal” and would “do little to protect people with pre-existing conditions.”

Under Senator Tillis’ bill, insurers could:
This plan leaves North Carolinians vulnerable – but once again, Senator Tillis is more concerned with his re-election chances than the health of the people he serves.

PENCE-TRUMP TOUR SCHOOL THAT TILLIS PUT ON THE CHOPPING BLOCK

Melania Trump and Karen Pence visited Fort Bragg students this week who could be studying in a run-down school for the foreseeable future thanks to President Trump, Vice President Pence, and Senator Thom Tillis.

That’s because President Trump’s emergency declaration – rubber-stamped by Thom Tillis – threatens funding for replacement of Butner Elementary School, according to a list released by the Defense Department.

So much for the bipartisan, above-the-fray image Sen. Richard Burr’s been trying to cultivate. Along with the rest of the Mueller Report, yesterday brought a couple of interesting paragraphs describing Sen. Burr supplying the White House counsel’s office with information about the Russia probe. From Politico:

“The report says that on March 9, 2017, then FBI-Director James Comey briefed congressional leaders and intelligence committee heads on the ongoing investigation into Russian interference. That briefing included ‘an identification of the principal U.S. subjects of the investigation.’

“Burr then corresponded with the White House a week later about the Russia probes, and the White House counsel’s office, led by Don McGahn, “appears to have received information about the status of the FBI investigation.”

As head of the Senate Intelligence Committee, Americans are trusting Sen. Burr to put our democracy first. Instead, he turned his back on our country in favor of looking out for his Republican buddies. 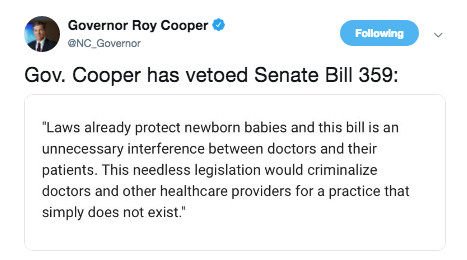 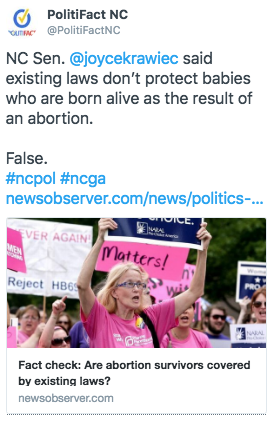 Perhaps most revealing, however, is how Republicans couldn’t answer a simple question: if this is such an issue in our state, why didn’t they pass this bill when they had the Governor’s mansion and veto-proof supermajorities?

Because, as CBC put it simply: “This legislation is not about protecting children. It is a shameful re-election gimmick.”

ICYMI: NO ONE WANTS THE GOP TO GERRYMANDER WINSTON-SALEM

Out of nowhere, without consulting residents or the city council, Republicans Donny Lambeth and Debra Conrad proposed a bill to gerrymander Winston-Salem’s city council districts for partisan, political gain and people are not happy.

It’s no surprise why the bill has no support outside of Lambeth, Conrad, and partisan Republicans:
WXII:

CBC:
“Two Republican legislators from Forsyth County – Donny Lambeth and Debra Conrad – filed legislation that would shove three Winston-Salem city council members into a single district. All three are black, all are Democrats and all are women…Rather than seeking ways to unnecessarily expand and impose their will on local governments, legislators should be extending and expanding the ability of local governments – where elected representatives are closest to those they govern – to act directly. Moving toward home rule – giving local government MORE authority – should be the default these days.”

On the NCGOP no longer having a supermajority…

Charlotte Observer:
“Thanks to a wave election for Democrats last November, Republicans no longer have a super majority in the N.C. House or N.C. Senate, and that might be felt most acutely with bills like SB367. The path of the trees legislation is far different than the one it would have taken a year ago. If it passes, Gov. Roy Cooper will likely veto (as he would have before), and he’ll have some pointed words about Republicans doing the bidding of developers. But now, because those Republicans have lost their supermajority, they have an uphill climb to override the governor’s veto.”

On the GOP’s attack on women’s health care..

CBC:
“This legislation is not based in medical reality or truth. It is being rammed through the legislature as a wedge issue to agitate a political base…To really stand up for children, legislators should support the expansion of Medicaid to more than a half-million needy North Carolina citizens who lack access to adequate health care. They should fully fund Pre-K in North Carolina to eliminate the backlog of children who are eligible. This legislation is not about protecting children. It is a shameful re-election gimmick.”

Fayetteville Observer:
“About the kindest thing that can be said about Senate Bill 580, then, is that it’s a publicity stunt that shuffles existing funds, inefficiently, to create an illusion of doing something…The fact is, state allotments for school supplies have been cut by some 55 percent since the Great Recession in 2008 and 2009. Instead of making up the difference, legislators chose to pass out feel-good tax cuts that had little impact on low- or middle-income taxpayers. North Carolina’s per pupil spending still ranks below the national average. Instead of gimmicks, why don’t we just give the schools more money for supplies?”

On Sen. Richard Burr giving intel on the Russia probe to the White House counsel’s office…

N&O:
“Burr should explain why he gave privileged information to the White House and how it did not compromise his role as chairman of a parallel investigation. If he chooses to wave off his action as a mere courtesy communication, he could wave off the credibility of his committee’s findings.” 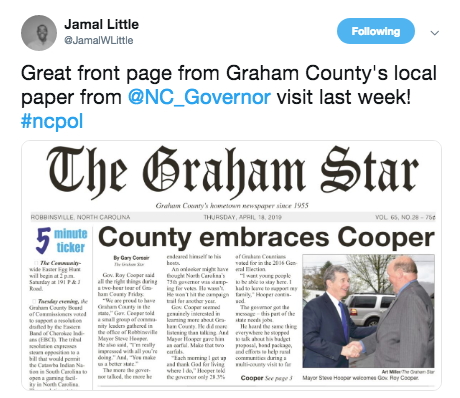