Republican voters didn’t have much of a choice when it came to their NC-09 primary pick. But in a field of “second-rate candidates” they elected Dan Bishop, the author of HB2, whose extreme positions have routinely embarrassed our state.
Charlotte Observer:

When asked three times if he regrets authoring HB2, Bishop refused to answerinstead saying “HB2 is an old issue.” But the national coverage says something different:
AP:

No matter how bad he wants to, Dan Bishop can’t escape his history of legislating discrimination and his party’s attempt to steal the NC-09 election.

Last week Republicans passed Senate Bill 609 which would expand access to private school vouchers to families of four making $70,000 a year. From the Charlotte Observer Editorial Board:

“By offering the scholarships to families making $70,000-plus, Republicans are showing that their aim all along isn’t really helping low-income families, but weakening public schools. Why? Lawmakers know that voucher programs take money from public schools, both directly and indirectly.”

A week ago, Senator Thom Tillis officially earned a primary challenger in conservative businessman Garland Tucker, a nightmare scenario for Senator Tillis that cemented him as the most vulnerable senator in the country. Here’s a quick look at the developments since:

1. Washington Republicans panic and then head to NC to “rescue” Senator Tillis.

The NRSC blasted his conservative challenger right after his launch, an attack that Tucker found “pretty amusing,” while RNC Chair Ronna McDaniel came to NC to fundraise with Senator Tillis and was greeted with voters protesting Senator Tillis’ attacks on their health care.

Tillis’ primary challenger blasted him as “very, very weak” to Hannity’s millions of listeners, while mentions in the News & Observer, Associated Press, Wall Street Journal, WWAY Wilmington, WXII Greensboro, and more highlighted Senator Tillis’ spineless flip-flop on the president’s national emergency in which he “caved like a $4 suitcase.”

3. True cost of the primary – “a pricey and distracting intraparty fight” – takes shape

Tucker ended the week launching television ads statewide, saying, “What Congress needs is backbone,” and announced that he’d seed his campaign with $1 million in preparation for a $6 million primary fight.

North Carolina “consumers and businesses can expect to feel very quickly the impact of a growing trade war.” About a quarter of NC’s pork products are exported, 15 percent of which goes to China. And soybeans, another major industry in NC, have already seen an 80 percent decline in exports nationwide. And North Carolina’s farmers “will see the most pain”:
“Everybody is going to feel it.”
– Ronald Simmons, Duplin County Hog Farmer

“[Farmers] are going to find themselves stuck between a rock and a hard place.”

– Duplin County resident
“We have borrowed from our life insurance policy, that’s how desperate we are. We are desperate for something to happen. We need help.”
– Lorenda Overman, NC soybean farmer
But instead of standing up for our state’s farmers, Senator Tillis once again surrendered to Donald Trump, applauding the trade war and calling it “long overdue.”

Charlotte Observer:
“The Observer editorial board endorsed McCready in his race against Harris last fall, and we continue to believe he is the best candidate to represent a changing 9th District. That’s especially true now, given the Republicans who’ve lined up for the opportunity to face him…They’re led by N.C. Sen. Dan Bishop, the unrepentant author of the discriminatory HB2, which cost the state countless millions in lost jobs and events. Bishop also invested in a controversial social network site that he knew had been linked to white supremacy.”

Charlotte Observer:
“Instead of just attempting to drain struggling schools of low-income families, lawmakers are about to provide middle-class families with a subsidy to attend private schools when perfectly good public schools might be available. That’s money that could and should go to public education. The result? If the Opportunity Scholarship Program grows, bad schools will get worse, and better schools also will lose students and resources. The weaker public schools get, the more parents will become dissatisfied and the more clamoring there will be for vouchers at different income levels. That’s long been the goal of Republicans here and across the country.” 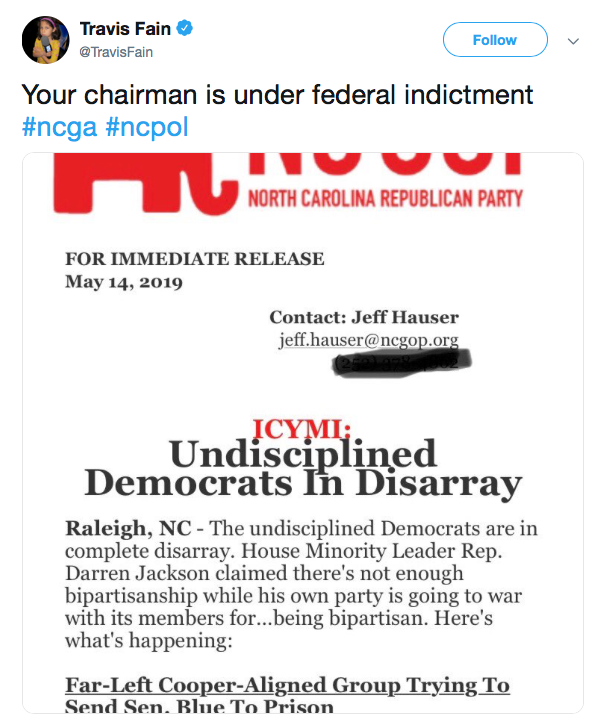