A LOOK TOWARD NOVEMBER

With Labor Day behind us, campaign season is officially in full swing. In a memo released this week, the NC Democratic Party outlined our path to success this November:

NO NEW CONGRESSIONAL MAPS … FOR NOW

This week a three-judge panel ruled that North Carolina’s voters won’t see new congressional maps this fall. It’s the same old GOP playbook – attack our state’s democracy and then run out the clock on fixing your mistakes.
NPR:

North Carolina voters will have suffered under unconstitutional maps for too long – they deserve the chance to finally pick their representatives, instead of the other way around.

North Carolinians are ready for new leadership in Washington. With an expanded map and unprecedented enthusiasm from the Democratic grassroots, this year’s congressional contests are heating up in districts that haven’t been competitive for years.In NC’s seventh district, 538 recently increased Democratic candidate Dr. Kyle Horton’s chances of success from 40 to 1 odds to a 3 in 10 chance, spelling trouble for Republican incumbent David Rouzer. 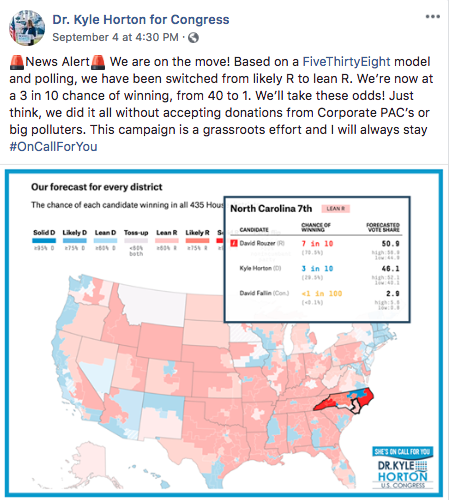 In NC’s ninth district, Republican Mark Harris is so desperate for an attack against Democrat Dan McCready that he actually tried to hit him for not having a long history of misogynistic sermons. Meanwhile, Dan is earning national attention for showing that Democrats are guided by their faith, and that Republicans don’t own that lane.
Roll Call

Vulnerable Republican Ted Budd has scrubbed his website clean of any mention of health care or the Affordable Care Act, despite his longtime vocal opposition to the law. The issues section of the site once highlighted his deep desire to repeal the ACA. Now, it fails to mention health care at all.
ThinkProgress:

No matter how many times he hits delete, Budd can’t erase the fact that he voted to strip millions of Americans of their health insurance, threaten protections for pre-existing conditions, and make fighting addiction even harder.

In an unprecedented and dangerous attempt to intimidate North Carolina’s voters, the Trump Administration along with Immigrations and Customs Enforcement issued a subpoena for a massive trove of sensitive voter information from all of North Carolina’s 100 counties.
Huffington Post:

Voters deserve to feel safe and protected when they head to the polls, and this fishing expedition by the Trump Administration is yet another example of the GOP’s hostility toward minority voters.

CONSTITUTIONAL AMENDMENTS STILL ON THE BALLOT

Last week, Republicans took a second stab at rewriting their deceptive constitutional amendments. This week, a three-judge panel ruled that the updated amendments can appear on the ballot in November.Any cosmetic changes legislative Republicans made don’t change the fact that these amendments remain an attempt to steamroll our constitution and mislead voters into doing the GOP’s dirty work:

ICYMI: MIDTERMS A REFERENDUM ON THE TRUMP ECONOMY

Though the Trump administration likes to sing the praises of a growing economy, everyday Americans don’t have much to celebrate. Wage growth remains weak while Trump’s massive tax cuts for corporations haven’t filtered down to workers, all of which spells trouble for Republicans at the polls in 60 days.
CNBC:

News & Record:
“These amendments were drafted in the dark, presented under a deadline, removed from full-throated debate, shoved on the ballot for you to consider. Why? Because their passage cedes to the legislature tools to execute more self-serving judgments without input from your representative. The only way to check this power play is for you to reject them all.”

Star News:
“Cooper is right; this is still a bald, partisan power play that would weaken state government, leaving it more venal and more vulnerable to corruption. Regardless of which party holds the executive office, we need to preserve a legitimate balance of power in state government. That is why Republican former governors — including Pat McCrory, who’s not exactly a big fan of the current governor — spoke out. If these two amendments ever do make it to the ballot, voters should reject them outright.”

Charlotte Observer:
“The two amendments at issue are both designed to take significant power away from the governor and give it to the legislature. Amassing power in one branch should concern voters whatever their political party, because checks and balances are essential to responsible government”

N&O:
“By mandating a statewide solution, legislators fueled discord instead of preempting it… There’s a clear path to a solution, and that’s for the legislature to restore the authority over the monuments to the communities that erected them.”

WRAL:
“While the actions by the General Assembly’s leadership that essentially commandeered every Confederate monument in a public space in the state may have been motivated by efforts to stir a political base, it has done little to effectively address real public concerns and help North Carolina step out of the muck of the past onto higher ground.” 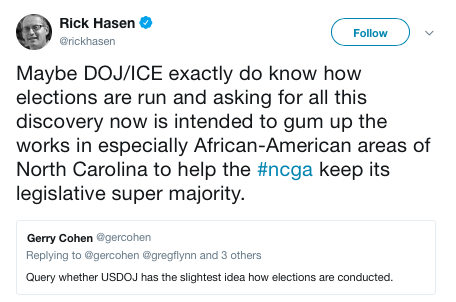