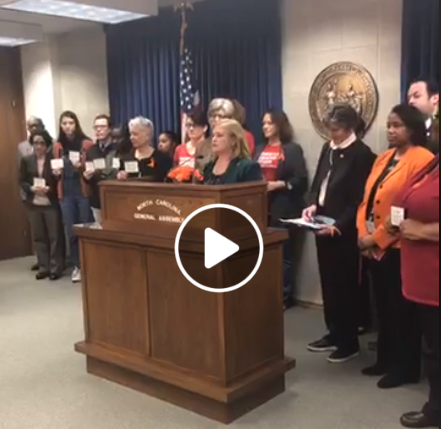 Raleigh – NCDP Chairman Wayne Goodwin released the following statement today on the anniversary of the school shooting at Marjorie Stoneman Douglas High School in Parkland, Fla., which took the lives of 17 people. To mark the anniversary, Rep. Clark, Morey, and Harrison introduced HB98, a slate of common-sense gun safety measures to help protect North Carolina school children, families, and neighbors from gun violence, at a press conference in Raleigh.

“One year ago, 17 people were brutally killed in Parkland Florida, the latest horrific school shooting to afflict our nation,” Chairman Goodwin said. “But in the aftermath was hope. Students rallied, protested, and pushed for change, including students across North Carolina. Their message was clear: the time for action is long past. North Carolina Democrats stand with those schoolkids and everyone across the state who understands we can implement common sense protections to help prevent these awful acts from claiming even more innocent lives.

“Rather than just speak out, North Carolina Democrats are taking action,” Chairman Goodwin continued. “Today, Democrats introduced common sense gun safety measures to begin curbing the epidemic of gun violence. Our lawmakers in the General Assembly should listen to our schoolkids and pass this measure to begin to protect our schools, our neighborhoods, and our families.”

Young people across North Carolina are suffering from gun-related violence. According to McClatchy, 220 North Carolina children and teenagers have died in the last five years because of gun violence, and more than 650 North Carolinians visited a hospital for a firearm-related injury in 2016 and 2017 alone.

Does Dan Forest Still Want the NBA to “Take Its Business Elsewhere”?