Democrats saw historic wins statewide, including the election of Vi Lyles as the first African-American mayor of Charlotte and Mitch Colvin’s win against a Republican incumbent. The victories come after NCDP launched a year-round organizing structure and invested heavily in mayoral and municipal contests throughout NC, using robust digital ad campaigns and unprecedented digital organizing tools to drive Democratic voters to the polls.

“You really need to know which way the wind’s blowing before you start throwing dirt. Otherwise it may land right back in your face. Nat Robertson didn’t check the wind before he unloaded volley after volley of dirt-caked slime at Mitch Colvin in their Fayetteville mayoral race, and he walked straight into an electoral typhoon. He’s likely still in the shower, trying to get it off. “

VIRGINIA DEMS WIN BIG: WHAT THAT MEANS FOR NORTH CAROLINA

Four takeaways from Virginia Democrats historic wins for the Governor’s mansion and the VA House of Delegates.

DC Republicans gave a huge gift to corporations and the wealthiest few at the expense of every day North Carolinians this week. The new tax scam slashes programs that North Carolina’s working families rely on like Medicaid, Medicare, and SNAP, while increasing the price of healthcare, higher education, and taxes. Meanwhile, the Senate is hard at work giving massive tax breaks to corporations paid for by cutting health care. Despite the devastating effects this bill could have on millions of North Carolinians, Rep. Pittenger called the plan “a good deal for North Carolina.”

After Lt. Gov. Dan Forest was found courting a violent extremist group at a campaign fundraiser, an Associated Press report found that the group split up families and derailed investigation, raising fresh questions about Forest’s relationship with Word of Faith. When asked to disavow the extremist group, Forest’s spokesperson dodged the question. North Carolinians have a right to be concerned by any politician who associates with this group.

According to a new report, federal funding for Medicaid expansion would have covered 2.8% of this year’s state budget. Over the next decade, that funding would amount to $13 billion going toward helping low-income North Carolinians afford healthcare for themselves and their families. Meanwhile, states that have expanded Medicaid have more resources for public health, including fighting the opioid crisis.

President Trump’s embarrassing behavior is driving away traditionally strong GOP voters like white women, suburban voters, and college-educated voters. Unsatisfied with the president, N.C. Trump voters warned that when midterms roll around they might “be voting to drain the swamp some more.”

North Carolina’s legal community has continued to speak out against the NC GOP’s attempt to rig the courts in their favor. A new analysis of the redistricting proposal found that 43% of all Black or African-American district court judges are double-bunked in the new maps.

“The only safe prediction is that Republicans will complain if it reduces their ridiculously unfair advantage even a little.”

Despite Donald Trump’s persistent attempts to sabotage American health care, sign-ups for insurance through the Affordable Care Act surged in the early days of enrollment. On the first day online, nearly twice as many people selected a plan compared to last year. 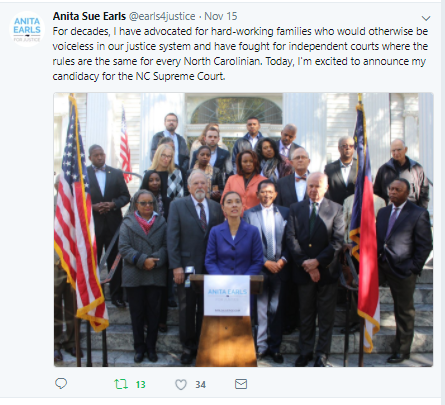 WHAT PEOPLE ARE SAYING

“Anita’s service to North Carolina is undeniable. She has been at the forefront of the fight for fair maps and voting rights in our state, and she has dedicated her life to achieving fairness, equality, and justice. I look forward to supporting Anita as she seeks to represent all North Carolinians from the bench of North Carolina’s Supreme Court.” – Former Gov. Hunt

“Anita has spent her life fighting for the rights of African-Americans across North Carolina, beating back racial gerrymanders and racist voter ID laws to ensure that every North Carolinian – regardless of color or background – has equal rights and opportunity. I am proud to support her candidacy for the North Carolina Supreme Court and look forward to her continuing to fight for equality and justice across our state.” – NCDP African-American Caucus Chair Linda Wilkins-Daniels

“There is no one more deeply qualified for our state Supreme Court than Anita Earls. A true champion of justice and the law.” – Sen. Dan Blue

“Anita Earls is one of the smartest, most capable lawyers I’ve ever met and she would be an outstanding Justice of the North Carolina Supreme Court.” – Rep. Grier Martin

“Republican lawmakers, who try at every opportunity, and sometimes try to make their own opportunities with misguided law, to skew election rules in their favor, insulted the intelligence of voters in blatant attempts to guarantee their dominance at the polls, whether that meant voter suppression rules (Voter ID, cutting early voting days) or their greedy district lines. Endless hours have been spent in court in defense of their foolishness against public-spirited citizens and organizations seeking fairness. It appears Nathaniel Persily has intended to deliver as close to that as he can. The only safe prediction is that Republicans will complain, if it reduces their ridiculously unfair advantage even a little.”

“The most insidious effect of partisan gerrymandering can’t be measured in dollars. When lawmakers map themselves into “safe” red or blue districts, they become unaccountable to voters who support moderation and compromise to solve problems facing the nation.”

“The trouble is, it appears that the Republicans who are leading the remapping effort are putting a premium on getting more Republican judges elected, instead of increasing the efficiency and effectiveness of the state’s judicial districts.”

“Unless our legislative leaders agree to take serious action against our opioid crisis, it will continue to worsen. There is a desperate need to create new treatment programs and facilities, to run robust prevention programs, and to find ways to pay for the treatment that our hundreds of thousands of opioid addicts need. We also need laws and programs that will diminish the astonishing numbers — it’s in the millions — of opioid prescriptions that North Carolina physicians write every year…It’s time for some fresh thinking in Raleigh, and a commitment to spending the money it takes to kick this deadly habit.”

“For years, red states like North Carolina have effectively been subsidizing part of health insurance for blue states. By declining to expand their Medicaid programs as part of the Affordable Care Act, many of those states have passed up tens of billions of federal dollars they could have used to offer health coverage to more poor residents. That means that taxpayers in Texas are helping to fund treatment for patients with opioid addiction in Vermont, while Texans with opioid problems may have no such option.”

REP GRAIG MEYER on how the GOP tax plan will hurt students
REP. DUANE HALL on breaking the supermajority 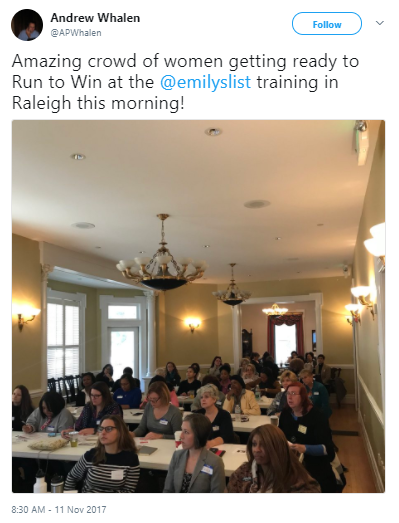