NC Democrats launched new digital ads targeting suburban Republicans for supporting Brett Kavanaugh, despite several serious allegations against him. This week, the NCDP ran digital ads against Reps. Dollar, Bradford, Stone, and Dulin, and Sens. Tarte and Bishop for believing Kavanaugh, not women. The ads will target women in suburban Wake and Mecklenburg through the weekend. 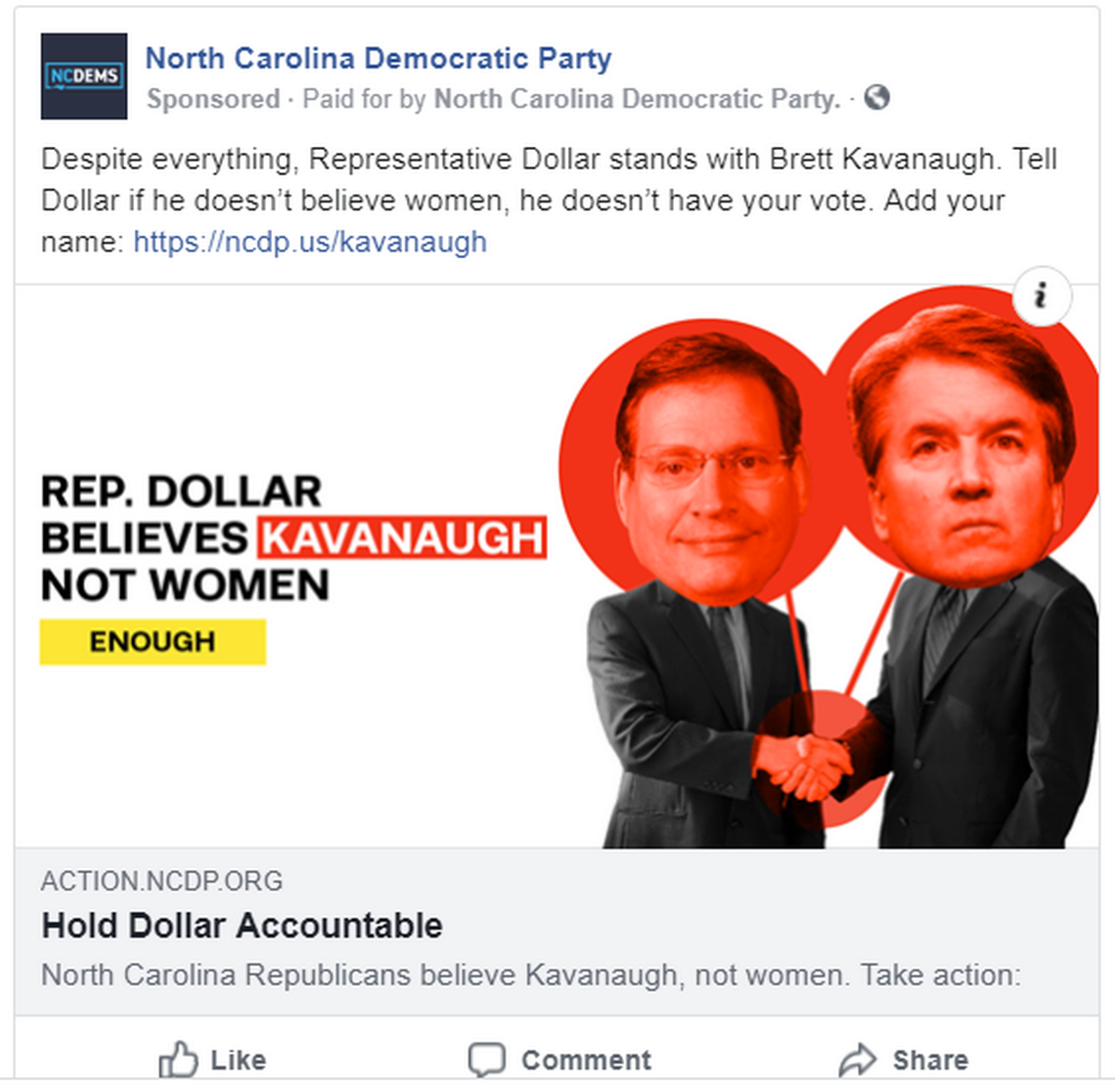 According to a bombshell exposé from the News & Observer, Speaker Tim Moore carried legislation to help a friend and campaign donor with a controversial Durham development that was in danger of failing, only to years later get a kick-back from the same donor’s new startup. The contract was so hush-hush that not even the CEO or COO of the startup knew about it. The big question – was Speaker Moore federally lobbying without registering?

This week, NC-13 Republican incumbent and one of the “worst House Republican slackers,” Ted Budd, hosted a glitzy $2,500 per person fundraiser with the “white knight” of payday lending, Mick Mulvaney.

Budd is leading the charge to bring back high-cost payday loans that trap low-income families and veterans in a cycle of debt, and now Mick Mulvaney is helping him fundraise. Bringing back payday lending may not be good for working families, but it’s good for Ted Budd’s campaign coffers. 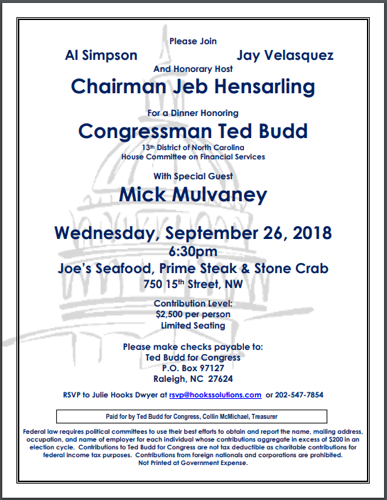 You heard that right folks – Mecklenburg Senator Jeff Tarte told the Charlotte Observer this week that he never supported the I-77 toll contract, saying, “At no point have I been in favor of this specific project.”

#tbt to this op-ed where Tarte says, “I am still in favor of tolling I-77.” Yikes. Tarte also called on Governor Cooper to “cancel the damn contract” knowing full well that he voted for a budget that would require the legislature’s approval to do exactly that.

Sen. Tarte is facing a strong Democratic challenger in Natasha Marcus (who actually did oppose the toll roads from the beginning) and it’s clear he’ll say anything to save his skin this November.

Democratic candidate Christy Clark is looking strong in the fight for an “unusually competitive seat” in Mecklenburg. Clark is looking for real solutions to the I-77 tolls, gun violence, and problems facing Charlotte’s public schools. Christy’s campaign is about something missing in this General Assembly – bringing people together to find common solutions:

“It’s not productive to point fingers. The answer is to work together to find solutions.”
Charlotte Observer:

Brandon Lofton, the Democratic candidate for HD-104, is ready to bring common sense back to Raleigh. Lofton wants to fight for everyday North Carolinians by expanding Medicaid, doing more for education, and working across the aisle to end the “partisanship” that is hurting North Carolinians, saying:

“People are tired of the level of politics in the nation and also in Raleigh. They’re aware that it’s getting in the way of our state’s progress.”

Democratic candidates for Congress continue to have NC Republican incumbents on the ropes:

ICYMI: NC WILL LOSE 20% OF EARLY VOTING SITES THIS YEAR

Thanks to Republican lawmakers, North Carolinians will lose almost 20% of their early voting sites this year. Despite Republicans’ talking points, more early voting hours do not equal more access to early voting. And rural voters will be particularly bad off –  Bladen County, for example, will close three of their four early voting sites, leaving one site for everyone in one of the state’s largest counties.

Since North Carolina learned that Hurricane Florence was headed for our state, Governor Cooper and his administration kicked it into high gear to ensure our state was prepared for the storm of a lifetime:

“…Gov. Roy Cooper and leaders across the state’s most endangered counties have taken Florence seriously and flown the flag of surrender. Cooper took the unprecedented action of ordering coastal counties to evacuate…Henry McMaster (for once, a Democrat and Republican thinking alike). Greensboro, Guilford County and Rockingham counties all went into emergency status. Schools were canceled, sporting events called off, shelters opened, and emergency personnel rushed to help anywhere they are needed.”
– Greensboro News & Record Editorial Board

For many across the state, power is returning and people are heading home thanks to the hard work of NC DHHS and NC DOT. Recovery will not be quick or easy – but Governor Cooper will continue working to help North Carolinians get their lives back to normal.

As North Carolinians hunkered down for Hurricane Florence, GOP candidates across the state decided that politics took precedence over preparedness. 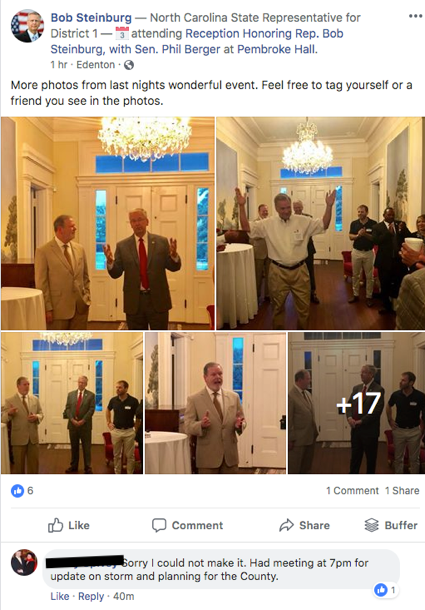 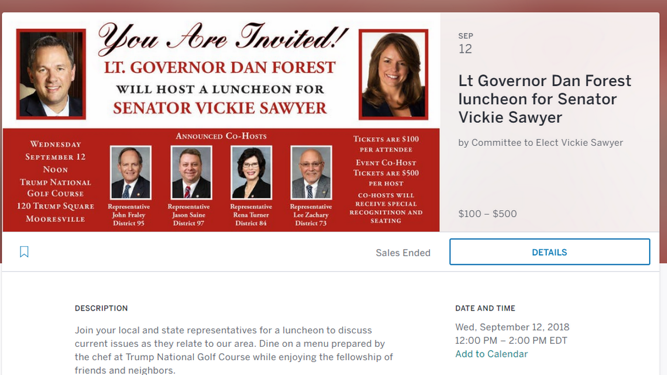 Then, Republican policies refusing to properly address hog waste lagoons or cap coal ash ponds led to pollution spilling into waterways, threatening clean water and the health and safety of our citizens.

And this week, North Carolinians were warned not to touch sea water, much less swim in it, thanks to all of the pollution flowing downstream and into the ocean.

WHAT EDITORIAL BOARDS HAVE BEEN SAYING

News & Record:
“Lawmakers and judges should have no say-so in how elections are decided. Voters should. In North Carolina, this has become a joke. It’s far beyond time that there is a national referendum for non-partisan districts that are drawn equally for everyone who casts a vote. America’s democracy is set apart from the rest of the world by the integrity of our elections. Let’s reinforce that founding principle once and for all.”

On the Trump Administration’s subpoena…

News & Record:
“The timing in election season and the reach of ICE’s arm could be a deterrent to perfectly legal voters born elsewhere or for whom English is a second language. People who, because of the hostile climate this administration has created for immigrants, may not want to draw a flashlight, much less a spotlight, toward their names. Innocent people have been treated as guilty. Such a concern would be understandable…Voter fraud is a negligible problem, but we appear to be making a federal case out of it.”

News & Record:
“The better measure is that Gov. Roy Cooper and leaders across the state’s most endangered counties have taken Florence seriously and flown the flag of surrender. Cooper took the unprecedented action of ordering coastal counties to evacuate…Greensboro, Guilford County and Rockingham counties all went into emergency status. Schools were canceled, sporting events called off, shelters opened, and emergency personnel rushed to help anywhere they are needed.”

N&O:
“Moore and his developer friends would rather not say anything about this cozy arrangement in which the legislature takes the rare step of overruling local officials in a land use case and the sponsor of the legislation gets an undisclosed contract from a beneficiary of the legislation… The public is entitled to know more about the private business dealings of the man who can steer or sideline legislation. The law may not require it, but continued public confidence in the House speaker does.”

Fayetteville Observer:
“The amendments deserve robust opposition because of the route they took to the ballot — the darkened back rooms of the General Assembly’s leadership. There was little or no debate, no public hearings or other input. They were conceived in secrecy and pushed onto the ballot by the legislative fiat of a veto-proof General Assembly majority.”

WRAL:
“For too many incumbents, [North Carolina’s record] is a record that disguises reality and short-changes teachers. It reflects a lack of respect for public schools and the educators who lead our classrooms. If those incumbents are on your ballot, look into the challengers and see if they pay more than lip service in support of public schools and respect the professionalism of classroom teachers. Vote for legislative candidates who value teaching and truly want a quality system of public education.” 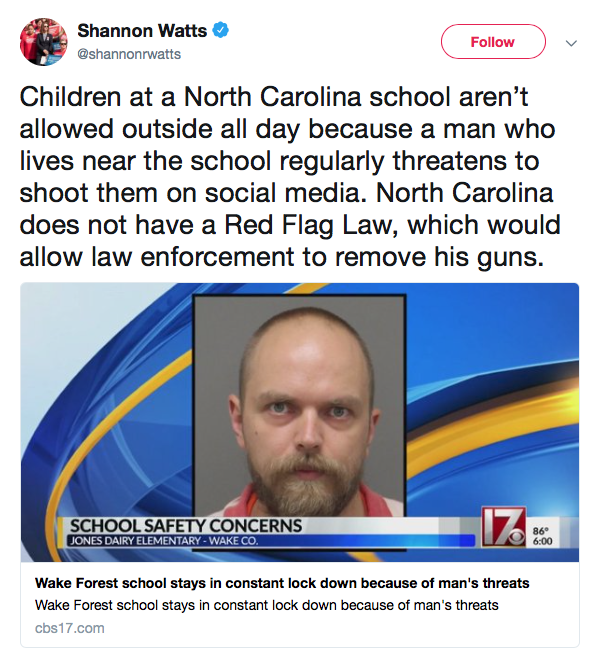