Special Master Nathan Persily released the newest version of North Carolina’s legislative districts and Republicans are terrified. The N.C. GOP continues to try to delegitimize the special master whose only job is to correct their unconstitutional mistakes because they know that fair districts mean more competitive districts. Once again, Republican lawmakers show that they’re more concerned with protecting themselves than with the rights of North Carolina voters.
Guilford County – Senate
2011 v. new Special Master proposal 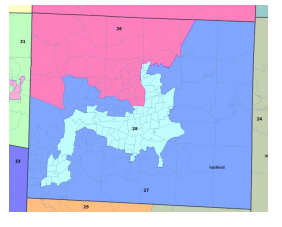 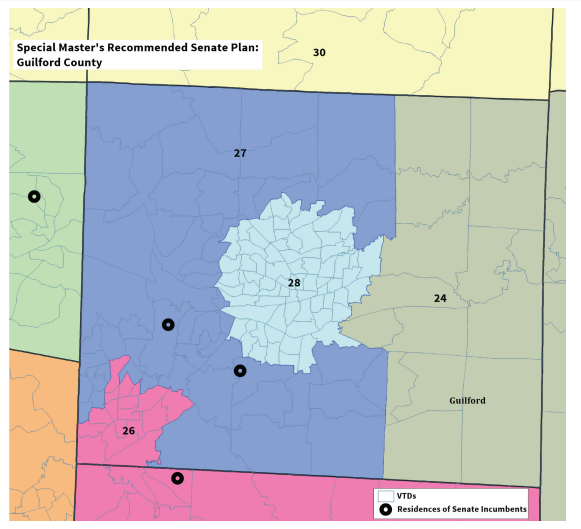 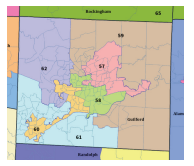 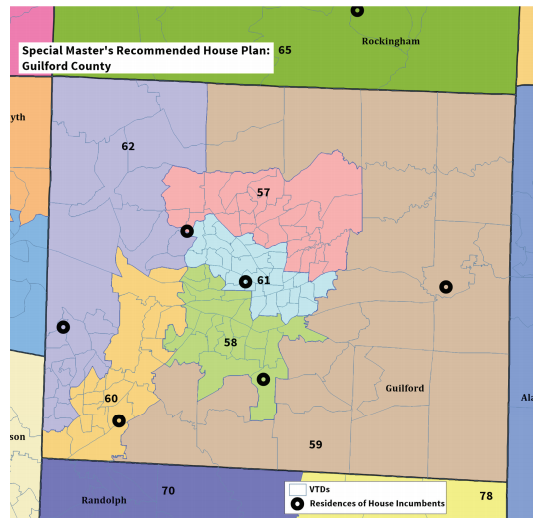 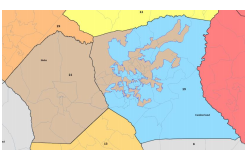 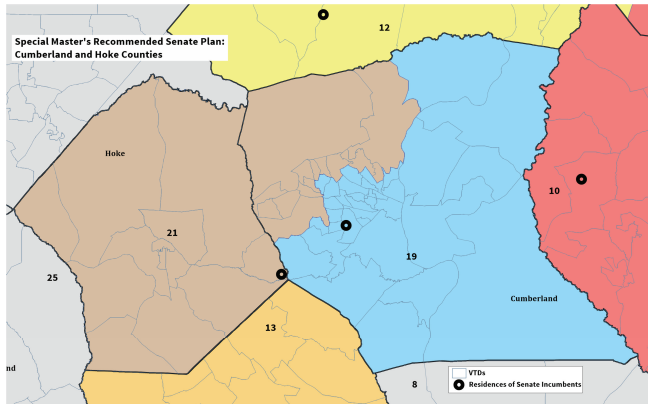 D.C. Republicans seem to be taking inspiration from N.C. lawmakers for a tax scam that looks eerily familiar. Both plans give tax cuts for private jet owners, golf courses and country clubs, corporations, and the wealthy, while raising taxes on the middle class, the working poor, and people with medical expenses. North Carolina’s tax reform is no model to follow, only offering a “Carolina Kickback” for the wealthiest few. 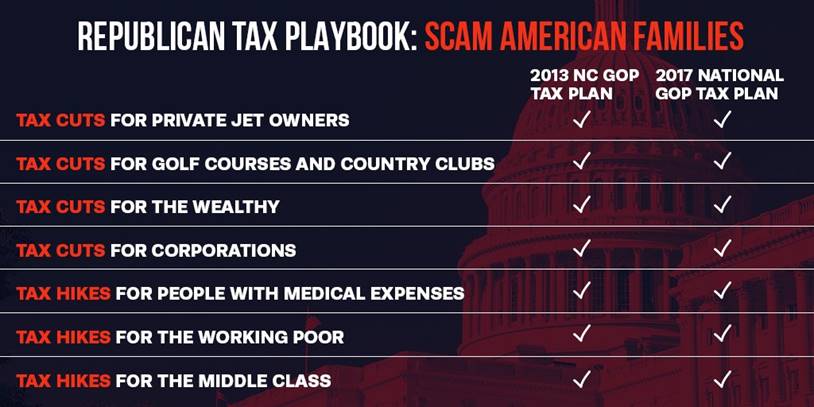 Several elements of the GOP tax scam will hit North Carolinians where it hurts by eliminating numerous helpful tax credits. Without these credits, Wolf Pack and Tar Heel gear will cost more, businesses will have a harder time hiring disabled workers, downtown redevelopment will slow, and historic buildings will be torn down.
News & Observer:

N.C. Republicans seem to have an interesting take on Christmas this year that includes:

All this from the party that claims to hold faith and family values dear. Merry Christmas from the N.C. GOP! 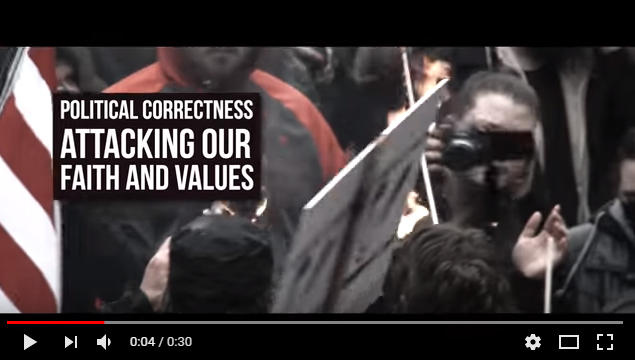 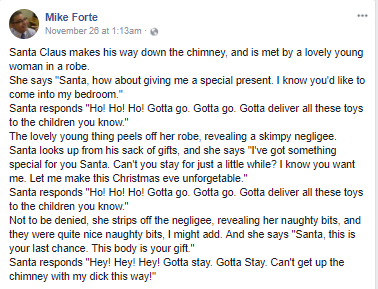 Thanks to N.C. Republicans prioritizing big business over N.C. families, North Carolinians might have to foot the bill to clean up 39,000 tons of toxic coal ash dumped in the Dan River. Democratic lawmakers tried to protect N.C. consumers three times from just this problem, but Republicans stood in their way. Now, North Carolinians could see their Duke Energy bill increase by $11-$20 because Republicans failed to stand up for them.

According to the News & Observer, North Carolina Senator Michael Speciale turned to Facebook this week to announce his support for alleged sexual predator Roy Moore. Speciale said he “whole heartedly” supports Roy Moore, even as nine women have accused Moore of preying on them when they were young. Speaker of the House Paul Ryan and Senate Majority Leader Mitch McConnell have called on Moore to remove himself from the race.
News & Observer:

DID THOMAS FARR LIE TO THE SENATE?

Despite testifying that he had no prior knowledge of the Helms postcard campaign, the INDY week reported that Farr helped plan the campaign weeks before it happened. Did Farr lie to the Senate Judiciary Committee about his involvement in an “unconscionable and unlawful scheme to disenfranchise African-American voters”? Americans deserve answers.

WHAT EDITORIAL BOARDS ARE SAYING THIS: GOP TAX SCAM BAD FOR N.C.

News & Observer: Beware the tax plan bearing gifts
“The problems with the plans, however, are beyond just the additional $1.5 trillion added to the national debt by Republicans who once viewed any Democratic spending on social programs as inflationary and ruinous with regard to running up debt. Some nonpartisan analysts think that in the long term, middle-class Americans might actually be paying more in taxes, while the super rich pay less and less.”
WRAL: Under latest tax bill, N.C. sends $669 million MORE to Washington
“Don’t be fooled, people in 19 states, including North Carolina, will pay more in federal taxes under the “reform” plan being considered by the U.S. Senate. North Carolina will send $669.5 million more in 2027 to Washington than if nothing is done. Of course, not EVERYONE will pay more. The richest 1 percent in the state will get huge tax cuts while the bottom 60 percent would, on average, pay more taxes.”


WRAL: Tax overhaul must work for all, not just rig it for rich and big business
” You don’t grow the economy by cutting taxes. The economy expands when consumers – mostly those at the middle income levels – have more disposable cash to go out and buy things. Look no further than our own state to see the proof. Over the last five years, the General Assembly has lavished tax cut upon tax cut to corporations and the wealthy while, in many ways, increasing tax burdens on those in the middle. What is there to show for it?  A stagnant economy, underfunded critical state needs, declining tax revenues and the distinct possibility of a half-billion hole in the next state budget.”

Star News: A tax credit we need to preserve
“The Republican plan to rewrite the U.S. tax code is a massive document with dozens of complex provisions. Folks in Wilmington and Southeastern North Carolina, however, ought to pay attention to one point in particular: the federal historic preservation tax credits. As it is, when you repair and renovate a qualifying building, you get a 20 percent tax credit over a five-year period. That’s a hefty incentive to preserve a historic structure — a practice that’s pretty important here. The House version of the tax bill eliminates the credit entirely. The Senate version keeps the tax credit, but adds some limitations.”

WRAL: Big tax breaks — reality for GOP donors, fantasy for the rest of us
“Sadly, it appears the truth here is the tax cuts are payback to the big donors and corporationswho’ve been financing Republican campaigns. These folks are now getting what THEY paid for. The rest of America gets a fantasy – a check that cannot be cashed.”

Greenville Daily Reflector: Estate tax benefits only people like Trump
“An estate tax repeal would provide a tax windfall of more than $3 million apiece for the top 0.2 percent of earners, and more than $20 million for the wealthiest Americans. It would cost $239 billion in revenue over a decade. It offers nothing for middle-class people, except more evidence of Mr. Trump’s and Republicans’ bad faith.”

Fayetteville Observer: Our view: Historic building tax credits face the wrecking ball
“If not for federal tax credits, the Prince Charles Hotel would likely be a pile of rubble by now…And if the tax-reform bill now in Congress passes in its present form, the tax credit — and thousands of beloved historic buildings — will be gone.”

REP. DARREN JACKSON stands up for our independent judiciary 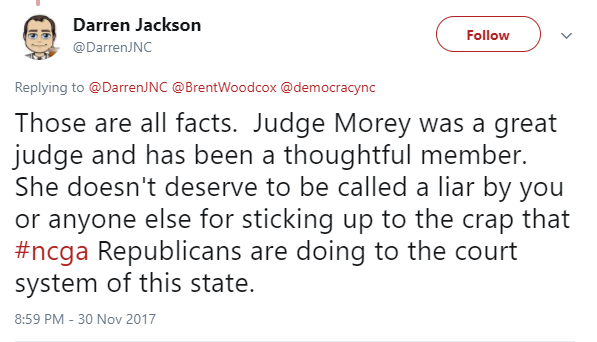 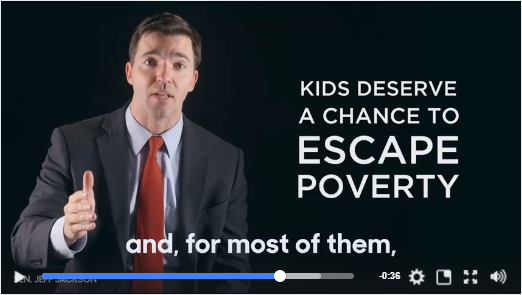 “Within six months, this grassroots pressure has brought to bear complete and total cessation of dumping into this Cape Fear River” 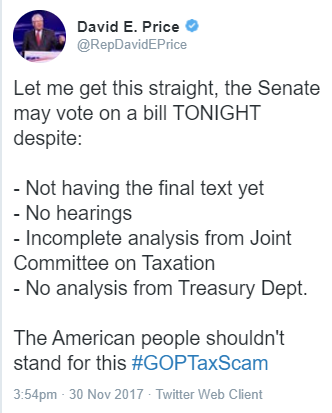 **Some non-political reads for when you’re ready to read something that isn’t about Mike Flynn:

NPR: The meaning of Meghan: ‘Black’ and ‘Royal’ no longer an oxymoron in Britain