Bipartisan opposition against the GOP’s proposed constitutional amendments that steamroll our state’s separation of powers and threaten our independent judiciary continue to grow. Several North Carolina leaders have joined the call to reject these amendments at the ballot this fall, adding to an already impressive list that includes all five living former Governors and all six living former chief justices of the NC Supreme Court.

On the amendment that would let the legislature cherry-pick judges…

“This proposal would let the legislature handpick their own political supporters to fill judicial vacancies, people who will be more inclined to let them pass any law they choose,”
– Former Superior Court Judge Donald Stephens
“It is a partisan power grab by the legislature and the ballot language does not explain this to voters. That is why all five former governors oppose both of these amendments.”
– Former Governor Mike Easley
N&O:

ICYMI: IS ELECTIONS BOARD AMENDMENT A RECIPE FOR CHAOS?

Republicans want voters to believe one of their amendments would create a bipartisan Board of Elections and Ethics when in reality it would create a gridlocked board destined for failure. Sen. Jeff Tarte even compared the board to the FEC, which is notorious for “dysfunction and deadlock.”

No matter how many times David Lewis insists the board will set aside their differences and get along, in the wise words of Gerry Cohen, “You can’t wish bi-partisanship on a system that’s pretty much broken.”

“The potential for chaos is there if it’s passed. An eight-person board with equal division between the two major parties just looks like you’re going to have a lot of tie votes.”
– David McLennan, political scientist at Raleigh’s Meredith CollegeCharlotte Observer:

Governor Cooper has been hard at work ensuring that North Carolinians have the resources and support they need to recover from the devastating impacts of Hurricane Florence. This week, the Governor announced Back@Home North Carolina, a $12 million initiative that will help families with unstable housing from Florence transition to safe and sustainable long-term housing.

“For many people impacted by this disaster, getting back on their feet will take time. Back@Home will help families move from disaster shelters to safe housing as they begin the process of rebuilding their lives.”
– Governor Roy Cooper

Finally, the Governor signed legislation providing $56.6M in Florence relief this week ensuring that North Carolinians will get the help they need to recover from this disaster.

“Politics was put aside and the response to human need came first. Cooper has done just what a governor should in circumstances like this, showing concern and compassion, visiting most of the counties affected by the storm, and overseeing a rapid response by state emergency-management officials and all the other government departments that must be involved.”
– Fayetteville Observer

HEALTH CARE ON THE BALLOT

Access to health care is on the ballot this November, and Republicans’ refusal to expand Medicaid is causing them to hem, haw, backpedal, and defend their record on the defining issue of the midterms.

Democratic candidate Wesley Harris (HD-105) is fighting to expand Medicaid, raise teacher pay, and bring a fresh look to Raleigh by winning a seat in South Charlotte. The district has been reliably Republican, but with new maps and Democratic enthusiasm at his back, Harris sees an opening and he’s not going to give it up without a fight. 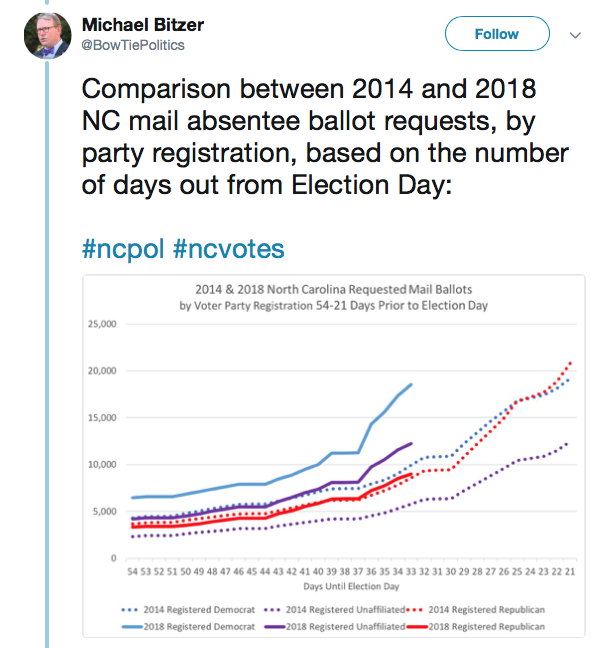 And in a year when suburban women voters could be the straw that breaks the supermajority, it isn’t looking any better for the GOP… 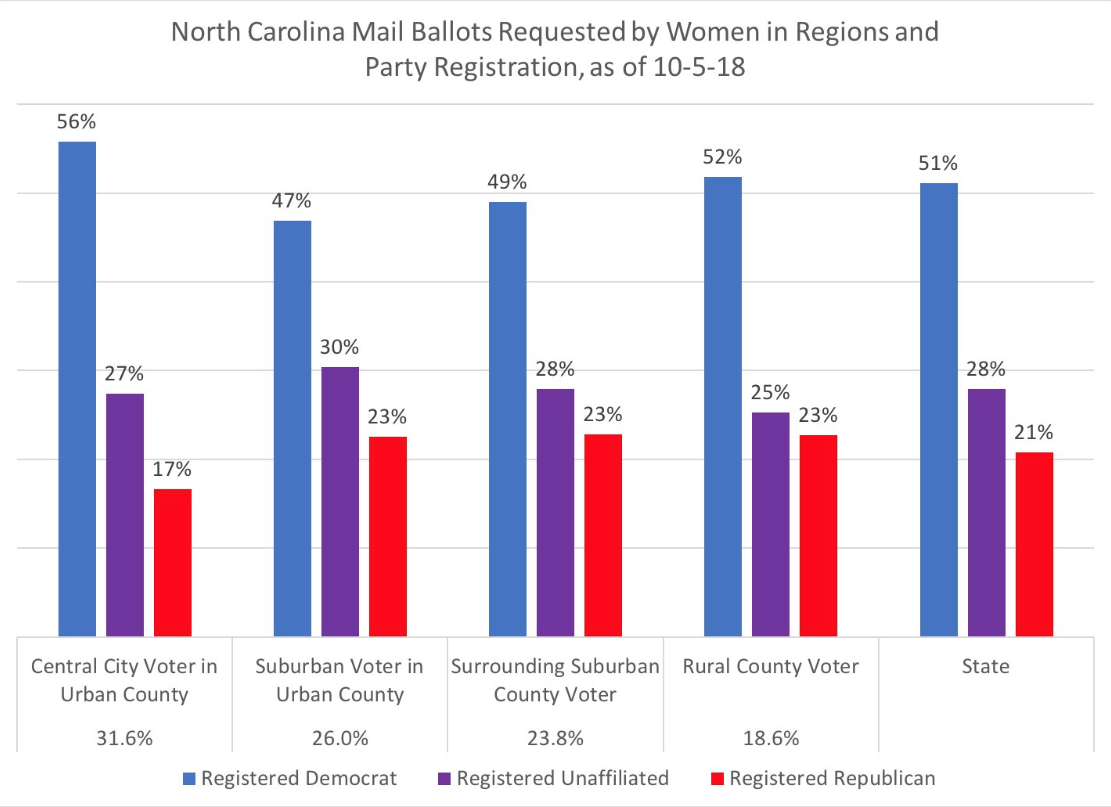 Last weekend, the NC Democratic Party’s Break the Majority initiative held its third – and largest – Weekend of Action where over 800 volunteers knocked over 24,000 doors. To date, 5,000 volunteers have knocked 137,000 doors across the state. 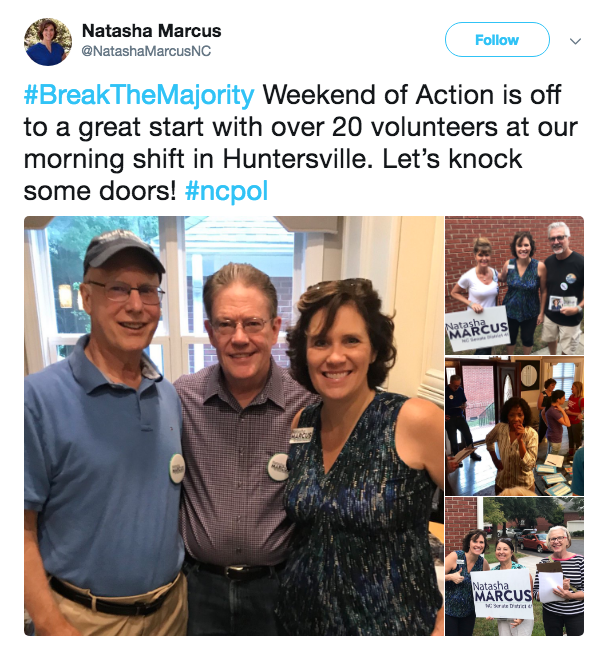 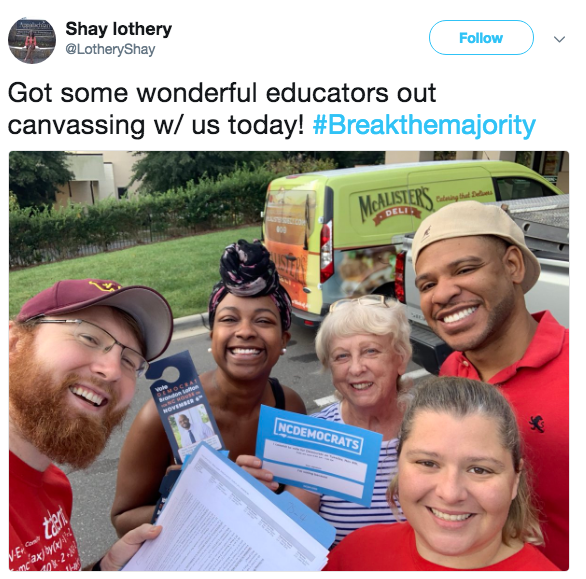 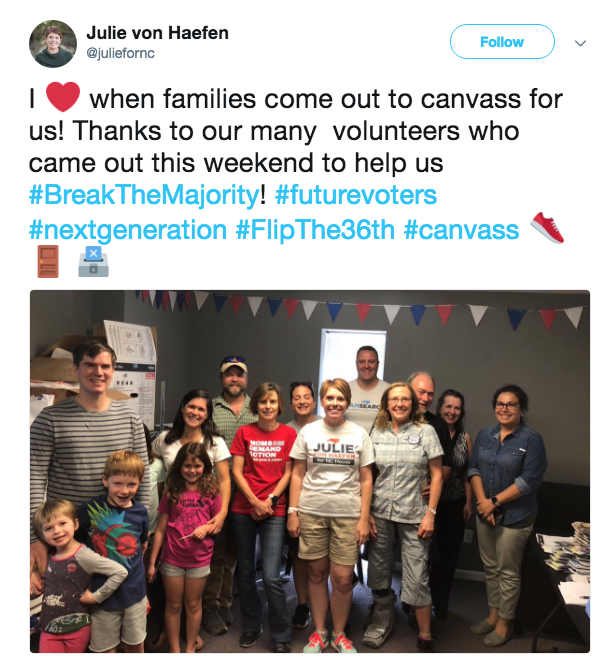 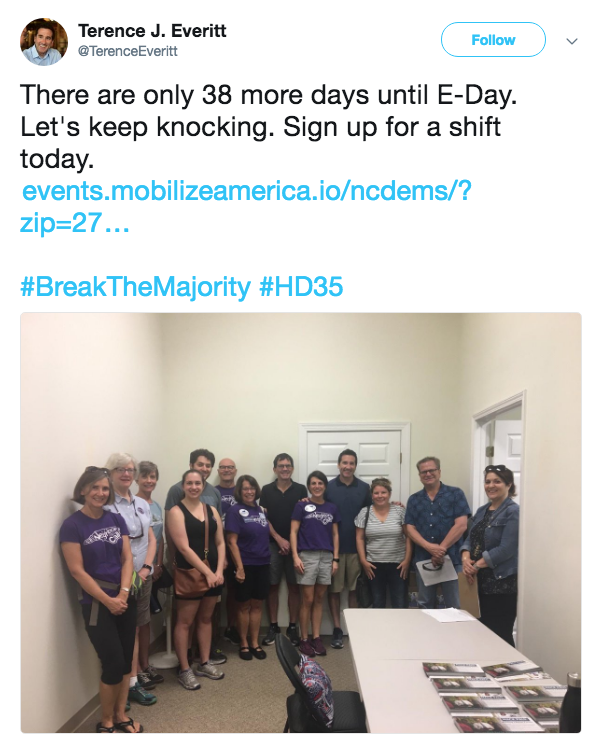 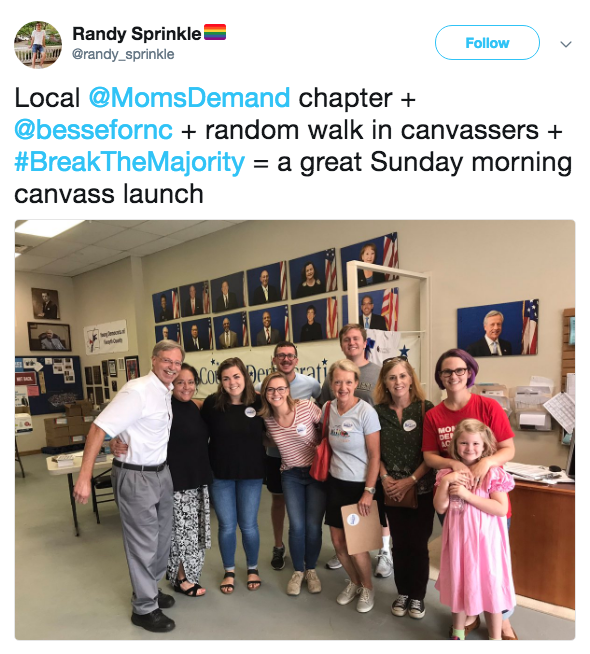 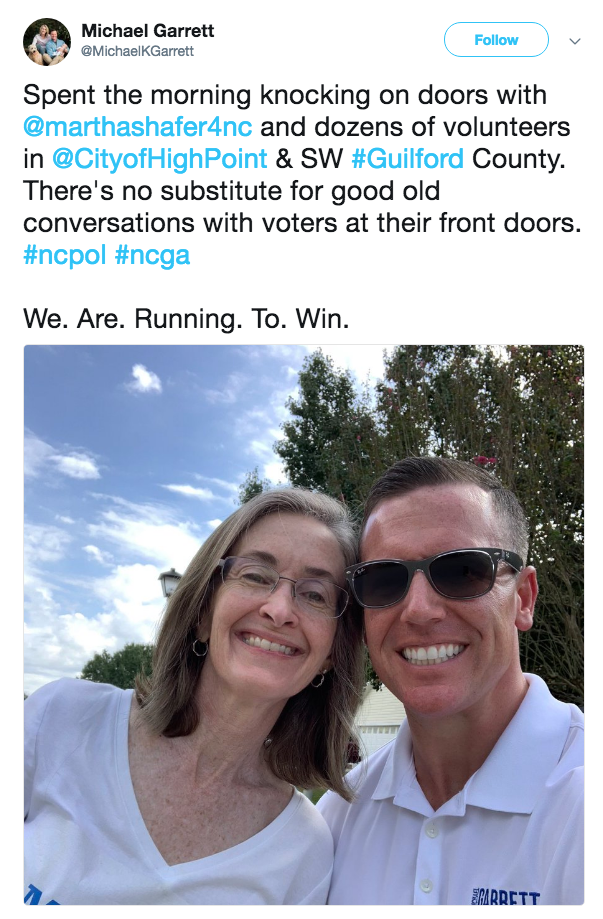 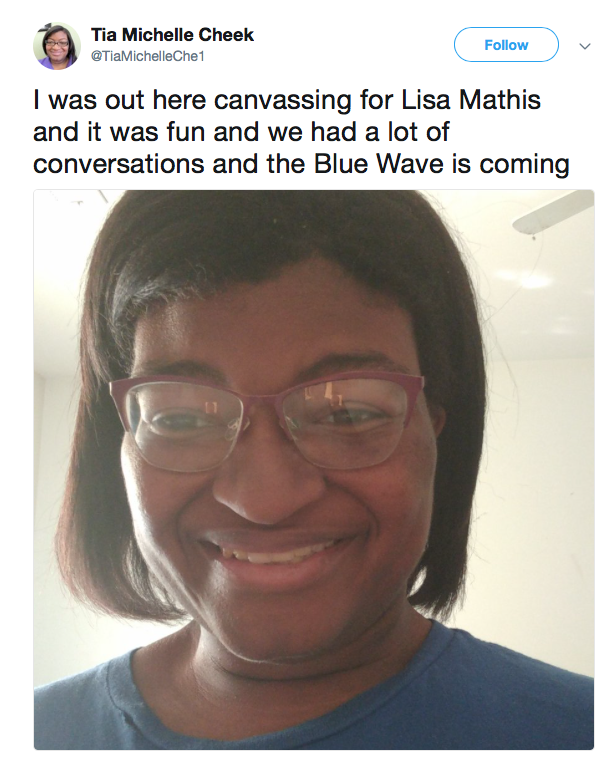 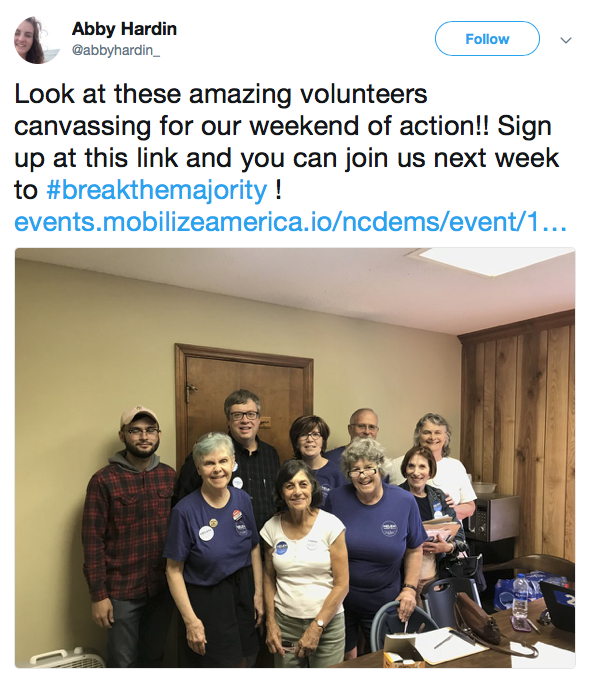 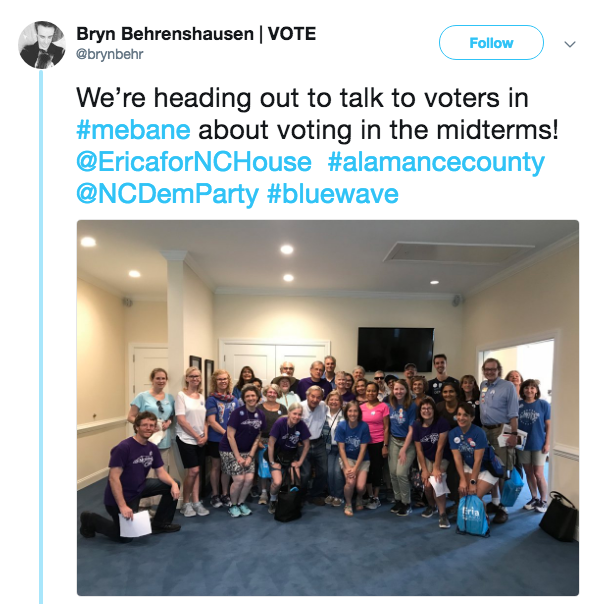 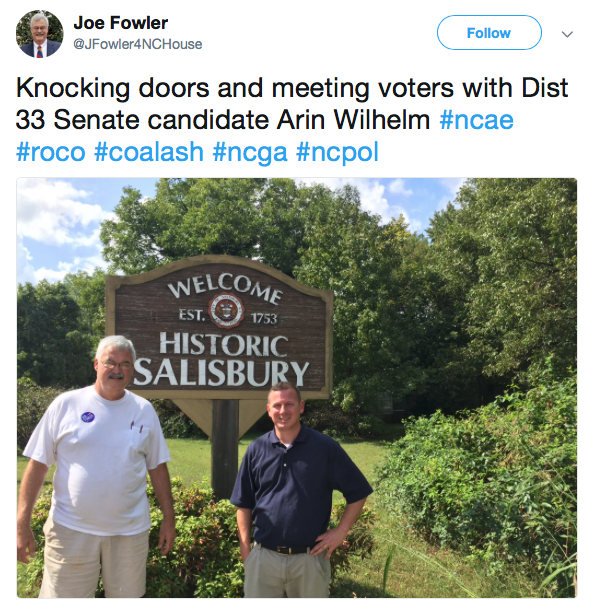 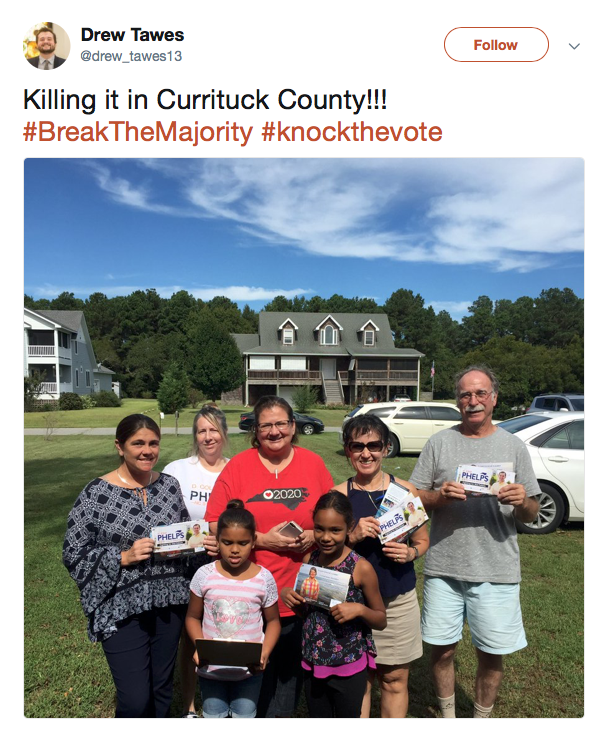 Salisbury Post:
“…giving the North Carolina legislature more power over judicial appointments would hardly be a change for the better… Five former governors and six chief justices of the state Supreme Court oppose this effort to wrest powers from the office of governor. Their longterm wisdom and experience should mean more to voters than lawmakers’ obvious and immediate thirst for power.”

Fayetteville Observer:
“Politics was put aside and the response to human need came first. Cooper has done just what a governor should in circumstances like this, showing concern and compassion, visiting most of the counties affected by the storm, and overseeing a rapid response by state emergency-management officials and all the other government departments that must be involved.”

WRAL:
“Regardless of what this latest FBI investigation might reveal, Kavanaugh’s behavior in the Senate Judiciary Committee is enough to disqualify him from a Supreme Court slot. Tillis and Burr (who pledged the during 2016 campaign he wouldn’t run again and be above partisanship) should reject Kavanagh’s nomination. That would give the president the opportunity to appoint someone else more suited to the grave responsibilities of a Supreme Court justice.”

Charlotte Observer:
“The head of the North Carolina Republican Party calls one of Brett Kavanaugh’s accusers “a criminal” who “should go to prison.” And we wonder why women are hesitant to report sexual assault?… Women have slowly won a more supportive environment over the years, and have gotten a boost from the #MeToo movement. The last thing victims of sexual violence need are people like Woodhouse driving them back into the shadows.”

Charlotte Observer:
“[Republicans’] decision to close their eyes and ears to troubling allegations is a political one, and it had to be explained Thursday in the most politically palatable way possible. That this is where they landed — calling Ford credible but confused — is both nonsensical and patronizing. We’re taking you women seriously, they said, except that we don’t believe you’re capable of knowing what happened to you. How insulting.”

WRAL:
“There is no legitimate excuse, no good reason, no justification not to expand Medicaid in North Carolina. Every candidate for the General Assembly needs to let voters know where they stand on Medicaid expansion. Voters should support those who back it and reject those who don’t. Plain and simple. See you at the polls.”