Raleigh – Another week, another backwards looking sermon from Mark Harris that continues to drag down his struggling campaign. Previously it was questioning whether women should have careers, then it was “fondly remember[ing] when being gay was illegal,” now it’s women submitting to their husbands.

The danger of Harris’ out of this century views for North Carolinians are clear; for his campaign, it means one more week where he’s explaining his past statements instead of sharing a vision for how we connect workers with better paying jobs. At the rate Mark Harris is going, tune in soon for another update.

A Republican North Carolina Congressional candidate’s views on women are again the focus of attention.  Former pastor of First Baptist Church in Charlotte Mark Harris is running for a Congressional seat against Democrat Dan McCready in what is shaping up to be a top target race for Democrats.  Last week, the political publication Roll Call interviewed Harris about past sermons in which he used his sermons to instruct women to submit to their husbands.  Here’s a quote from a 2014 sermon.

Harris told Roll Call he didn’t think submission meant that men and women are unequal.  He’s already been under fire for questioning whether women pursuing careers outside of the home was a healthy choice.  Harris made waves earlier this year in knocking out the first Republican Congressman in a primary this election cycle when he beat Robert Pittenger.

Charlotte Observer: In sermons, NC congressional candidate called on women to ‘submit’ to their husbands
By Brian Murphy
August 7, 2018

Mark Harris, the Republican nominee for Congress in North Carolina’s 9th district, is again making news for old sermons about women and their role.

In the sermon on Ephesians 22, Harris called on women to “submit” to their husbands.

“Well, what’s the message to the wives? Well, God instructs all Christian wives to submit to their husbands,” Harris said.

“You see wives, please hear me this morning. The message is not from your husband to submit, the message is from the Lord. You’re not to ever submit ma’am because your husband demands it, but you do it because the Lord ordained it. Now ladies, you can rebel against that command, but just please understand you’re not rebelling against your husband,” Harris said.

Harris said in the sermon that “submission is not about inferiority in any way, any shape and any form. It simply reflects a God-ordained function of things.”

Harris stood by those comments in an interview with Roll Call.

Mark Harris is currently running as the Republican nominee for the House of Representatives in North Carolina‘s 9th District. He has worked as a media pastor, sharing sermons via podcast and appearing on the Christian Broadcasting Network. He has also been involved with the anti-LGBTQ hate group the Family Research Council (FRC). So, given all those things, it shouldn’t be terribly surprising that a video has surfaced in which Harris openly longs for the days when homosexuality was criminalized — after all, FRC President Tony Perkins recently said something similar.

At the 2015 Rally for Liberty in Jomeokee, North Carolina, Mark Harris told the crowd: 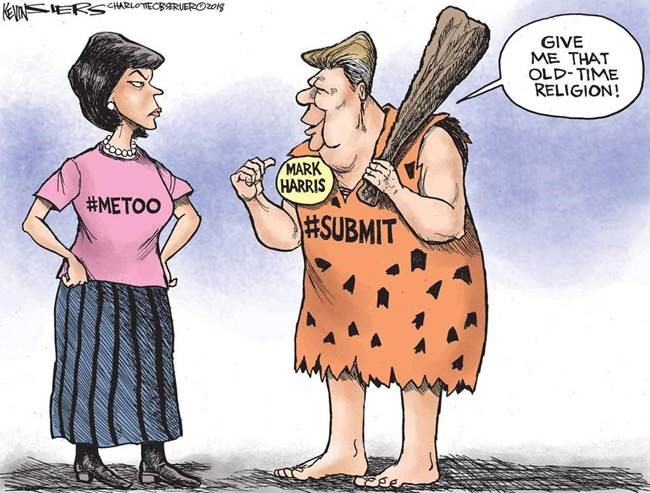 NCDP Statement on the Anniversary of Social Security