“For a few shining days, the Republican senator from North Carolina had a backbone. Then, in one crumbling moment Thursday afternoon, it went away.”

“What Tillis says he believes and what he does are now revealed to be VERY different things – particularly when a re-election is on the line.”

“This week, principle crumbled and Tillis — who’s up for re-election in 2020 and definitely keeping track of which way the wind’s blowing — joined the majority of Republicans in the Senate to vote against the measure … If Tillis truly believes Trump will work with Congress in limiting the presidential power to declare emergencies, then we’ve got a bridge in Brooklyn to sell him. We’ll give him a great deal. Really.”

WFAE: Column: For Thom Tillis, This Was Not A Profile In Courage

“Tillis caved like a sand castle at high tide …  The real reason Tillis flipped is because in Trump’s world, loyalty is the only thing that matters.”

“Underscoring the political pressures in play, Tillis, who last month became one of the first Republicans to say he’d oppose Trump’s border emergency, said Thursday he’d vote to support it. The NC senator, who faces a potentially difficult re-election race next year, cited talks with the White House that suggest Trump could be open to restricting presidential emergency powers in the future.”

“Tillis is a man without conviction; shrinking, timid and trembling when confronted by executive threat and not at all concerned by the threat of executive overreach, which he railed against just days ago. He cannot be trusted.”

“North Carolina and its citizens deserve senators who will stand by their convictions and stand up against a bully president. Thom Tillis has failed that test in spades.”

“Do we want someone in Washington representing our interests who only seems to be worried about getting re-elected, or someone who can take the heat and stand up for what he really believes?”

“However, in the end, when Sen. Tillis voted on March 14 to support the national emergency declaration, I can believe only one statement that Sen. Tillis wrote in the op-ed: ‘President Trump has few bigger allies than me. …’”

“Sure, he stood by that principle — right up until it was time to cast his vote. So much for responsibility and being a steward. So much for principle. All of those virtues have been in short supply among Republicans since President Trump took office.”

“By his vote Thursday, it appears that Sen. Thom Tillis has the backbone of an invertebrate … We should expect our representatives to be consistent in thought although there may be extenuating circumstances that mandate a rethinking of a stated position. But cowering to the President in this instance does not appear to be such a rethinking.”
The New York Times: Opinion: Senator Hypocrisy (R-N.C.)
“…Tillis as turning “wobbly. Yesterday, however, Tillis caved. He did so after conservatives began talking about supporting a primary challenge to him in 2020 if he voted against Trump. “This is Trump’s party,” Rachel Bitecofer of Christopher Newport University notes.”
The New York Times: Opinion: Twelve Righteous Republicans (and 41 Cowards)
“As for the Tillis, he too has his principles — or had them … It’s remarkable how quickly principles become liquid when a Senate seat is at stake. Remarkable, also, how completely the G.O.P. is now defined by self-abasement.”

“For Tillis, 58, decisions on how and when to support or oppose Trump are clearly shaded by his expected bid for a second Senate term next year — and the drive to hold off any strong challengers.”

The Washington Post: Editorial: A dozen Republican senators show some spine. It won’t be enough.

“Especially disappointing were the votes in favor of Mr. Trump’s emergency by Republican Sens. Thom Tillis (N.C.), Ted Cruz (Tex.) and Ben Sasse (Neb.) … With the party’s ultras talking about a primary challenge when he is up for reelection in 2020, however, Mr. Tillis flip-flopped, claiming that now there is a “serious discussion” of amending laws to prevent a repeat of this situation.” 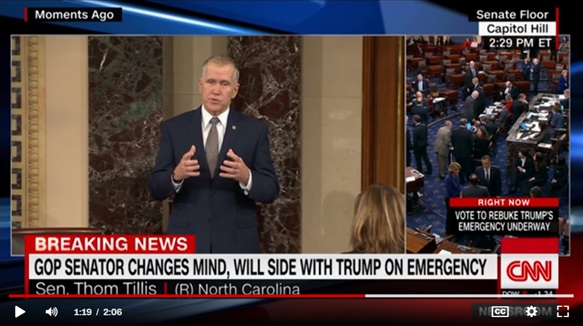 CNN: A Republican revolt against Trump? Not so fast.

“In the end, Tillis only cited the President’s new interest in legislation to limit future uses of that power as his reason for changing his mind … And a top Republican official in Tillis’s state of North Carolina indicated there may have been a raw political reason behind Tillis’s change, telling CNN the senator was coming under tremendous pressure at home to remain loyal to Trump.”

“So much for intellectual honesty … He threw away his closely held principles in warp speed, knowing all too well that a stray presidential tweet could end his political career.”

“Tillis, who unseated Democrat Kay Hagan in 2014 by less than 2 points, faces a competitive re-election, which Inside Election with Nathan L. Gonzales rates Tilts Republican. The military construction budget in North Carolina spans several other bases including Fort Bragg and Cherry Point.”

The Hill: Republicans up for reelection fear daylight with Trump

“Even though they want to fend off primary challenges, this is also a situation where, in the general election, if they cross Trump on this issue, Trump could win their state and they could still lose,” [Ford O’Connell, a Republican strategist] added. “In a lot of these races, it’s going to be two-point races, whether it’s Gardner or it’s Tillis.”

“In an act that the North Carolina Democratic Party might bring up a time or two during Tillis’ 2020 re-election campaign, Tillis said on the Senate floor that the tweet was good enough for him … Tillis’ fire sale of his vote to Trump might have had something to do with the active recruitment for primary challengers against him in North Carolina.” 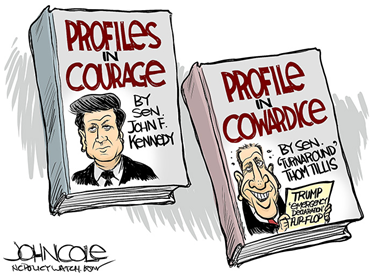