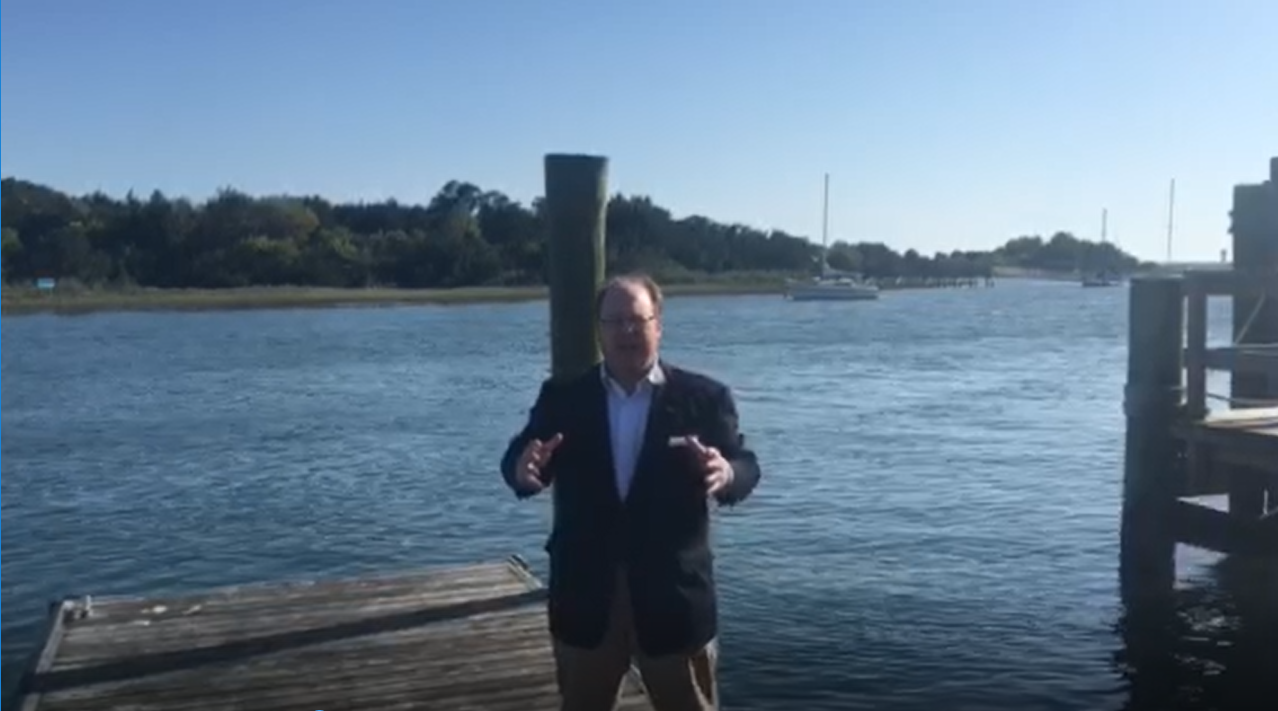 Morehead City, N.C. – North Carolina Democratic Party Chairman Wayne Goodwin traveled to Wayne, Craven and Carteret counties yesterday as part of NCDP’s Rural NC Listening Tour, which is focused on communities that have been left behind by today’s economy.

Democrats are fighting hard for rural areas and are running competitive, local candidates and speaking directly to local voters throughout rural North Carolina.

With the May 8 primary elections just around the corner, N.C. Democratic Party Chairman Wayne Goodwin made a stop in New Bern Thursday as part of the party’s ongoing Rural N.C. Listening Tour.

Now on the third leg of the tour, Goodwin is traveling through rural regions of the state to meet with residents, local officials and media to hear their questions and concerns.

A native of Hamlet in Richmond County, Goodwin formerly served as North Carolina’s Commissioner of Insurance before being elected Chairman of the state’s Democratic Party in 2017. He also served as a Democratic member of the General Assembly representing 68th N.C. House district, including constituents in Richmond and Stanly counties.

We sat down with Goodwin to get his take on topics ranging from the upcoming November state elections to the role of social media on today’s media landscape.

Q: What do you hope to accomplish with the Rural NC Listening Tour?

A: “I’m from rural North Carolina, and as we have seen increasingly over the last several decades, it appears that the voices and voters in rural Eastern North Carolina are being listened to less by the political parties and the political system we have in place. I believe that not only the Democratic Party but anyone who wishes to serve this state need to have a 100-county strategy. As the chairman of the state Democratic Party in conjunction with Gov. Roy Cooper, who agrees with me on this strategy, we are working to meet and to listen to and coordinate policies that residents of Eastern North Carolina believe will help those communities.

“Rural North Carolina has been left behind in many respects. … That’s why I started the Rural N.C. Listening Tour, to go to communities that need their concerns addressed. And also to share what the Democratic Party’s plan is, because a lot of people aren’t politically active and don’t know the difference between the two major political parties.”

Q: What are some of the top issues you’re hearing from voters across rural North Carolina?

A: “Right now the number one topic on the minds of folks here in the east, particularly given that this part of North Carolina is comprised of agricultural communities, is how President Trump’s trade war is going to decimate the farmers and farming families and small businesses that are either directly or indirectly connected with the success of corn, soybeans, tobacco and other products that are grown and raised and processed here. That’s a topic that reaches across party lines.

“I think as long as President Trump advocates with a shoot-from-the-hip approach, and as long as Republican members of Congress and state leaders defer to his position, it’s going to hurt North Carolina’s agricultural community. That’s the most pressing topic as of the last few weeks.”

Q: With Republicans making major gains in the N.C. Legislature over the last decade, how does the Democratic Party begin to reconnect with voters who have become disillusioned with the party?

A: “It is vital that the Democratic Party provide reasons not only to vote against bad Republican policies but also reasons to vote for Democratic measures and candidates. Gov. Cooper had put forward his Hometown Strong program (an initiative to strengthen rural communities) and it is vital in addition to that that the state Democratic Party emphasize those things that matter most to the voters of this state. And that would be a strong public education system, insuring we have the best teachers available for our students; encouraging a more diversified economy that provides better paying jobs, not just in the urban areas, but in rural communities; and increasing the investment in rural infrastructure so we can help tackle what have been described as crumbling roads and bridges as well as sewer and water systems. And those types of initiatives help provide jobs at the local level.”

The wins have been based on well-organized candidates who ran on issues that weren’t on a national agenda, but rather were part of whatever message mattered most to the communities in those districts, Goodwin said.

“That is indicative that people are not satisfied with the status quo,” he said. “But we can’t, as Democrats here in North Carolina, rest on the successes in these other states … we have to fight tooth and nail every week about what the difference is between having Democrats in office versus Republicans.

“It is inspiring and motivating and satisfying to see these successes in other states, but we have a lot of work here to do in North Carolina and that is why Gov. (Roy) Cooper, and myself and our teams have been laboring since the day after the last election to fight for breaking the (General Assembly) super-majority and electing more Democrats.”

Goodwin was at the B&G Grill Thursday morning for a breakfast and the latest stop on his statewide listening session.

Wayne County matters to the N.C. Democratic Party, and to the future of the state, he said.

“I think there is a palpable energy (because of the wins),” he said. “People can feel an excitement as well as frustration with what they have seen in Raleigh and in Washington. A lot of the Democratic base wants to do everything they can to ensure that the blue (Democratic) wave that has landed in other states will land here in North Carolina in 2018.

“That is why I am here in Goldsboro, here in Wayne County. For the Democratic candidates to succeed, and for what we believe will lead to North Carolina being put back on a forward track, it is vital that we have a 100-county strategy and that the Democratic Party and its candidates here in this state reach out to every community.”

Some people feel neglected by both political parties, he said.

“It is important to me and it is important to Gov. Cooper that we reach out to rural North Carolina because so much that is happening now in Raleigh and Washington is damaging the pocketbooks and future of this part of our state.”

One goal of his North Carolina listening tour is to share the Democratic message, but also more importantly to listen, he said.

Goodwin said one issue he is hearing about now is the Trump trade war in which Republicans on the state and national level are deferring to Trump’s shoot-from-the-hip approach, he said.

Nobody, not even Trump’s own staff, knew about the tariffs or what Trump based his decision on to plop tariffs or extra costs on goods coming into the country, Goodwin said.

Apparently Trump didn’t play it out, nor did the Republicans care, that a situation like this leads to retaliation, he said.

Now the Chinese have slapped tariffs on 182 different American goods — many of which are agricultural products that are raised in North Carolina, particularly eastern North Carolina, he said.

“If you grow soybeans, corn, tobacco and many products of the like, the cost will go up, and it will be so much harder for small farmers, or farmers in general, to earn a living,” Goodwin said.

That impacts not just farmers, but everyone who puts food on the table, clothes on their backs and who have jobs dependent on the success of the agriculture community, he said.

That is the No. 1 issue at the moment that people in the area are talking about — how out of touch Raleigh and Washington are and are damaging eastern North Carolina, Goodwin said.

Goodwin said he is excited about the party’s success in fielding candidates for all of the General Assembly seats up for election this November.

It is the first time ever that has ever happened, he said.

“In our elections this year voters will have a true choice between the two political parties,” Goodwin said. “But the fact that we have a candidate in every district is indicative of the fact that the N.C. Democratic Party is more organized than ever before, that people believe in the message of Gov. Cooper.”

It is also an indication that people are frustrated and tired of having politicians choose their voters through the use of “hyper-partisan” gerrymandered districts, he said.

There is another history-making component to the number of candidates, Goodwin said.

For decades the Democratic Party has had a more diverse slate of candidates compared to the Republican Party, he said.

However, this year it is the most diverse field of candidates the party has ever had, he said.

There is a record number of Democratic women running for the legislature, as well as persons of color and younger candidates, he said.

These metrics matter because the state has changed dramatically in both its rural and urban areas, Goodwin said.