The state Democratic Party is running Facebook ads targeting Republican state legislators over their support for Judge Brett Kavanaugh for U.S. Supreme Court justice that feature altered photographs of them shaking hands with the embattled nominee.

The ads appeared Wednesday night, hours before Kavanaugh and Christine Blasey Ford, a woman who has accused him of sexually assaulting her when they were teenagers, testified before the U.S. Senate Judiciary Committee.

The ads are targeted at women in suburban Wake and Mecklenburg county districts, said state Democratic Party spokesman Robert Howard. The ads are scheduled to appear at least through this weekend and feature Republican legislators in what are thought to be key battleground districts this year.

Before the allegations against Kavanaugh became public this month, more than 100 Republican state legislators sent a letter urging his confirmation to U.S. Sens. Thom Tillis and Richard Burr, Republicans from North Carolina, and Sen. Chuck Grassley, the Iowa Republican who is chairman of the Judiciary Committee.

The Facebook ads have altered photographs of Rep. Nelson Dollar of Cary, Rep. John Bradford of Cornelius, Rep. Scott Stone of Charlotte, Rep. Andy Dulin of Charlotte, Sen. Jeff Tarte of Cornelius and Sen. Dan Bishop of Charlotte shaking hands with Kavanaugh. Some of the text says the legislator “believes Kavanaugh not women.”

Two other women have accused Kavanaugh of sexual assault, facilitating sexual assault or other sexual misconduct. He has vigorously denied all the allegations.

Dulin said in an telephone message said he was not connected to the Kavanaugh controversy.

“It’s very interesting the Democrats would stoop low enough to try to bring me into that thing,” he said. “I don’t know those people at all. I support women.”

No Republican legislator has spoken out against Kavanaugh since the allegations became public, Howard said.

“Their silence on this matter shows that they still stand by Judge Kavanaugh despite multiple allegations of sexual assault,” he said.

The other legislators did not return messages. 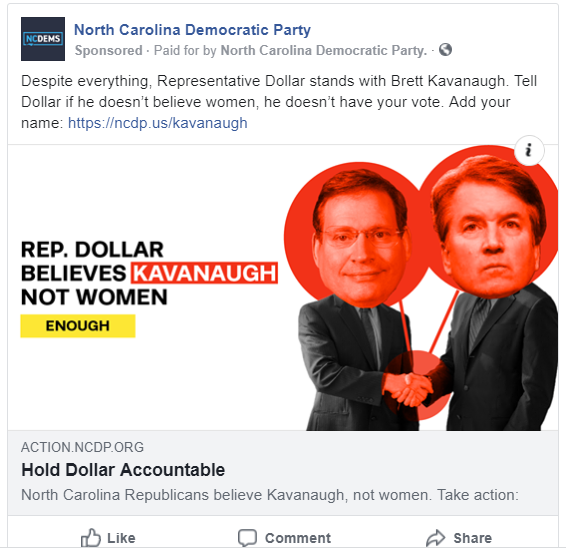