Raleigh –  This month, North Carolina Democratic Party Chair Goodwin headed south on stops four and five of the Rural NC Listening Tour, visiting Cumberland, Bladen, Duplin, Sampson, Robeson, Scotland, Richmond, Union and Anson counties. While on the tour, Chair Goodwin aims to hear the concerns of rural voters and have real conversations with the people who feel left behind in our state. 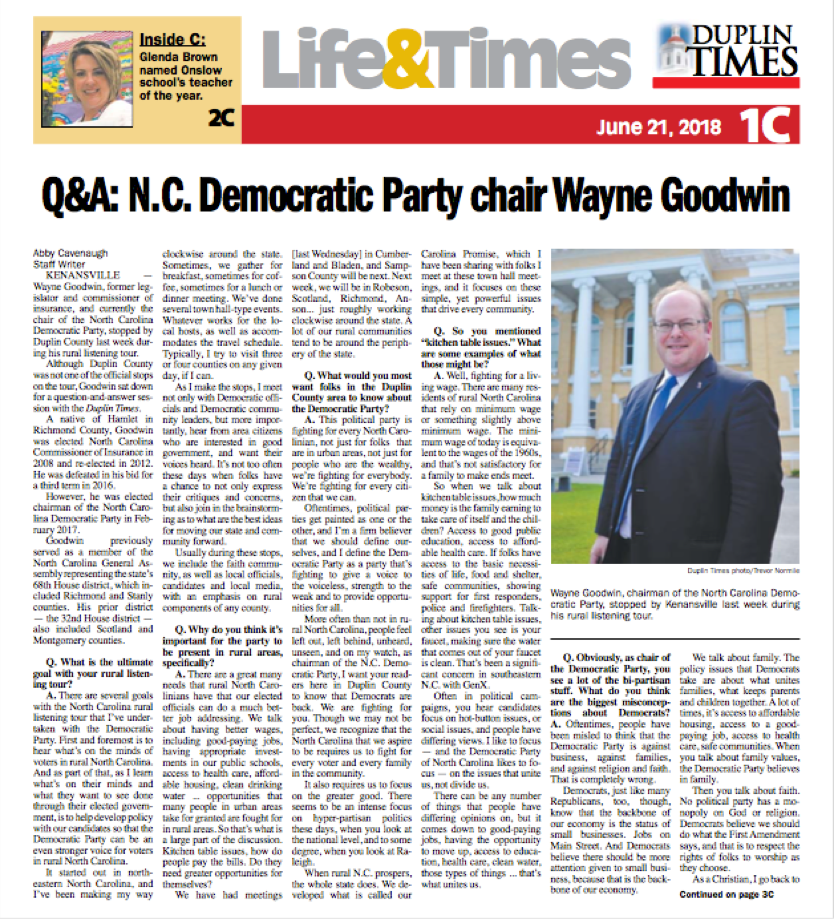 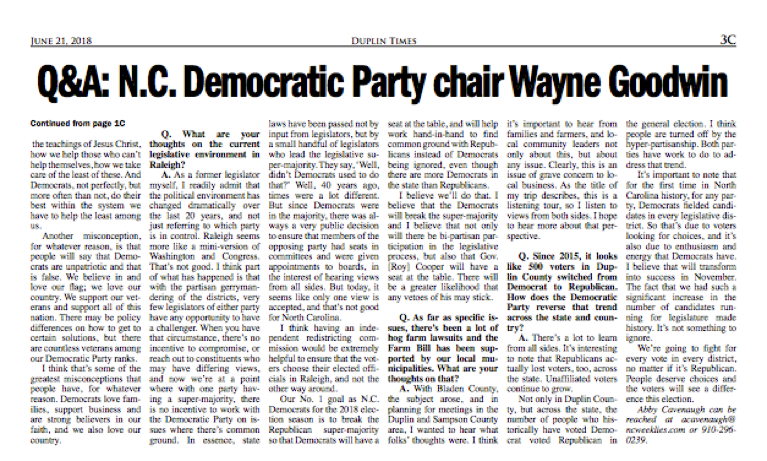 ROCKINGHAM — The head of the state Democratic Party swung through his home county Monday during a four-stop day on his “Rural N.C. Listening Tour.”
Hamlet native Wayne Goodwin, who was elected state chairman in February 2017, met with Richmond County residents at Liberty Place to hear what they have to say about North Carolina’s political climate.

“I believe it is vital that we go to communities that believe that their voices are not being heard and give them a chance to express what their needs are and hear what Democrats are doing to address those needs and concerns,” he said in a telephone interview while traveling from Scotland to Richmond County.

Monday’s jaunt started in Robeson County, with Goodwin heading west on U.S. 74, ending the day with a stop combining residents of Union and Anson counties.
“If rural counties prosper and have any portion of their needs met, that’ll help the whole state,” he said. “Because it impacts urban counties when rural citizens leave … to go find work or use their roads or use their schools or use their water.”

Being from a rural county, Goodwin says he thinks he’s “the right person at the right time to address this concern.”

While he’s focusing “predominantly to hear what’s on the minds of Democrats,” Goodwin acknowledged the high percentage of unaffiliated voters and said he’s willing to listen to the concerns of any voters who attend the meetings.
Goodwin said those he has spoken with are concerned mainly with “kitchen-table issues” instead of hot-button topics.

“They’re tired of hyper-partisanship — not only by the Republicans, but by both major political parties — and they want to hear who’s fighting for them,” he said. “Who’s fighting for better jobs, better wages, cleaner water, better access to affordable health care — opportunities that have been escaping rural North Carolina.

Public education and economic security are also at the top of the concerns list.
“So it’s an opportunity for me to hear what’s on the list of needs that our rural communities have and for me to share with them who their candidates are and what parts of our platform, if elected to be in the majority of the legislature, will address those concerns.”

While cannabis legalization hasn’t come up in his talks in the east, Goodwin said he expects to hear more about it as he heads west.

Goodwin said he is focused as much on the 2020 election as he is this year’s mid-terms “because it takes a while to reach voters … particularly when so many are fed up with politics.”

“Politics gets us into messes,” he said, “but politics and hardworking folks who care about our state can get us out of this mess.”

When it comes to the projected “blue wave” of Democrats securing a majority of seats across the state and nation, Goodwin said he was “cautiously optimistic.”
“… Democrats should do quite well for mid-terms,” he said, “but I know that there’s a lifetime, politically, between now and November and that it is vital that Democrats continue to reach out to and listen to and fight for the votes of every voter.”

Goodwin says a lot of actions taken by legislative Republicans on the state and national level are because “they know Democrats are going to do very well in November.”

Everyone who cares about the state, he added, “needs to vote.”

“These mid-term elections are notorious for having low voter turnout, ” he said, adding that with such turnouts, “bad decisions can be made at the ballot box.”
That being said, Goodwin encourages all voters to make a showing at the polls. 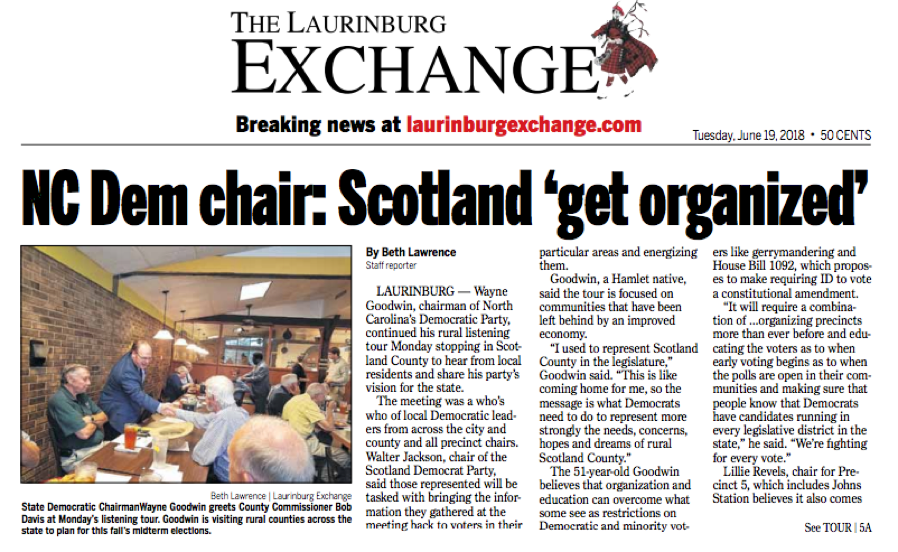 The meeting was a who’s who of local Democratic leaders from across the city and county and all precinct chairs. Walter Jackson, chair of the Scotland Democrat Party, said those represented will be tasked with bringing the information they gathered at the meeting back to voters in their particular areas and energizing them.

Goodwin, a Hamlet native, said the tour is focused on communities that have been left behind by an improved economy.

The 51-year-old Goodwin believes that organization and education can overcome what some see as restrictions on Democratic and minority voters like gerrymandering and House Bill 1092, which proposes to make requiring ID to vote a constitutional amendment.

“It will require a combination of …organizing precincts more than ever before and educating the voters as to when early voting begins as to when the polls are open in their communities and making sure that people know that Democrats have candidates running in every legislative district in the state,” he said. “We’re fighting for every vote.”

Lillie Revels, chair for Precinct 5, which includes Johns Station believes it also comes down to taking ownership of one’s vote.

“Some of them will wait and say, ‘Well, I don’t need to because everybody else is going to,” and that’s where the biggest mistake is made because … then nobody does,” Revels said. “Voters need to depend on themselves to do it. Don’t wait on the next person to do it.”

The meeting was opened by state Rep. Garland Pierce, who is running as the incumbent for House District 48 which represents Scotland and Hoke counties. He face Republican Russell Walker in November.

“We need a lot of support this year. There’s a lot of things happening that’s going to do a lot of damage if we’re not careful, but whatever obstacle that are put in our way, let them not be obstacles but opportunities,” Pierce said. “Let’s get people to the polls, educate voters and let them know the importance of what were doing, where we are here in the state of North Carolina. We need to start working hard because we really need every vote and every vote counts.”
Jan Schmidt, co-chair of the Scotland County Democratic Women, believes the best way to reach people is to let them know that their vote should be about issues not party lines.

“The issues that we’re running on are not necessarily Democratic or Republican issues. They are really American issues; they’re state issues. They’re things that everybody needs — the fact that they’re talking about eliminating pre-existing conditions from health care that’s a human issue, to feel that once you’ve been sick once insurance companies cannot cover you in the future — these are things that affect everybody,” Schmidt said. “There are some people we will not influence; they run on one issue. Those people who vote that one issue will not vote on all these other issues.”

Goodwin said the listening tour is important because government can “best represent the needs of our people” by leaving the halls of legislature and going to the grassroots level in communities, especially rural areas, to learn what the needs truly are, according to Goodwin.

Monday’s tour also included stops in Robeson, Richmond, Union, and Anson counties and will be followed by new visits over the summer in Western North Carolina. Earlier in the tour, Goodwin visited Cumberland, Bladen, Duplin, and Sampson counties.