“Farmers in Eastern North Carolina, and across this country, are hanging on by their fingernails in some cases. And what is the president doing? He’s cutting off their fingernails.”
– Former Congressman Bob Etheridge 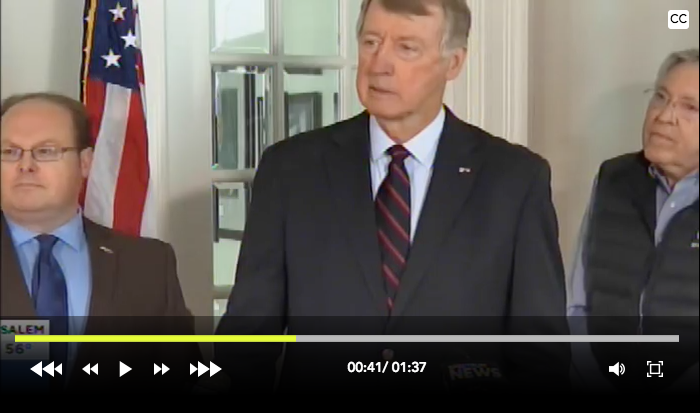 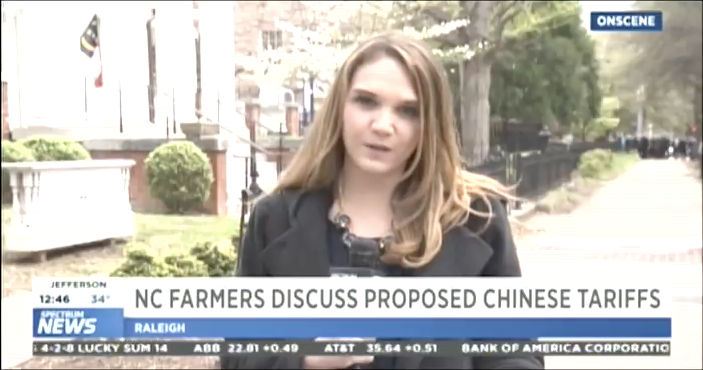 N&O: Could Trump’s tariffs accidentally help the NC Democratic Party
By Will Doran
April 9, 2018Trump put the country on a path toward a trade war with China earlier this year when he announced he wanted to impose tariffs on steel that would make Chinese-produced steel more expensive. The Chinese government has now hit back with a number of proposed tariffs targeted at American products.

And China’s retaliatory tariffs were not-so-subtly aimed at hurting the economies of states that supported Trump in 2016, including North Carolina.

Trump has decried what he says are unfair Chinese trade practices. He has said, on Twitter, that “trade wars are good, and easy to win.” However, on Monday he acknowledged that American farmers could be harmed. He framed it as a patriotic sacrifice.

“Our farmers are great patriots,” Trump said. “They understand what they’re doing for this country. And we’ll make it up to them.”

But in North Carolina, Democratic leaders said farmers shouldn’t have to sacrifice for a trade war that, they said, Trump started for purely political reasons.

“President Trump and North Carolina Republicans have put North Carolina farmers directly in the cross hairs of a dangerous and escalating trade war,” NC Democratic Party Chairman Wayne Goodwin said at a press conference. “Their policies will make North Carolina agricultural products cost more, and this will hurt farmers and consumers and all of rural North Carolina.”

Goodwin said he and other party leaders have been on a “listening tour” of rural areas, and they keep hearing about the tariffs.

“This topic — the Trump trade war and reluctance of Republicans to stand up for our state and for our farmers and for our families — this is one of the paramount issues,” Goodwin said.

“President Trump’s trade policies all have one overarching goal in mind: putting America first,” she said.

If the plans go forward, Chinese tariffs on tobacco, soybeans, corn and pork could endanger millions of dollars in sales for North Carolina farmers.

“Farmers today are scared to death,” he said. “They’re frightened because they depend on predictability from their government. … And what are we getting? This is what we’re getting from Washington today. Chaos. This administration continues to force chaos and confusion on people.”

But, the Democrats who spoke Monday said they have ideas to help rural areas, like a program Gov. Roy Cooper started called Hometown Strong. Its goal is to help rural areas get grants and other funding to build roads, expand high-speed internet and train people for skilled jobs.

And as they talk to rural voters about what ideas Democrats have, they’ll also be talking about Trump’s ideas.

“Farmers in Eastern North Carolina, and across this country, are hanging on by their fingernails in some cases,” Etheridge said. “And what is the president doing? He’s cutting off their fingernails.”

Trump’s mounting confrontation with China also threatens to light a bonfire directly beneath the Republican Party’s last firewall against potentially significant losses in the 2018 midterm elections.

The GOP’s dominance of small-town and rural America has become the indisputable geographic foundation of its power in Washington. And the party is counting on continued strength in those areas to contain its losses this fall, particularly after the repeated indications in a number of special and local elections over the past 15 months that distaste for Trump in urban centers and white-collar suburbs could produce a sharp backlash against Republican candidates in more densely populated areas.

Tough talk against China was a big part of Trump’s campaign pitch, but the prospect of an actual trade war with China could weaken that last line of defense for the GOP. No economic sector has raised greater alarms about the potential consequences of a trade war than agriculture, a highly export-dependent industry mired in a years-long slump even as most other economic sectors have revived. That’s sent farm state Republican elected officials and strategists scrambling to criticize the rapidly multiplying threats by Trump to impose punishing tariffs on a wide array of Chinese products — and the Chinese threats to respond in kind, particularly against US agricultural exports.

Democrats believe the threatened tariffs are creating new opportunities for them in rural places that have become very stony ground for the party. “He is making a very, very big mistake by doing this,” says Rep. Cheri Bustos, an Illinois Democrat who leads the party’s rural engagement effort for 2018. “Many of the farmers I know, the growers and the producers, they were not only just supportive of President Trump but they were enthusiastically supportive of him. It’s one more indication that he’s treating us like flyover country. When you are messing with someone’s pocketbook at a time when they are already hurting, that does not bode well.”

In rural America, the cultural barriers for Democrats remain formidable. But the Republican reluctance to confront Trump too forcefully could create a rare opening in farm country for Democrats who are generally challenging Trump much more directly than their GOP counterparts over the tariffs. North Carolina Democrats, for instance, held a press conference Monday to denounce Trump’s saber rattling as a threat to the state’s farmers.

“If the Republican members of Congress don’t start … standing up to this President, I think that November is going to be a very positive election for Democrats,” Bustos says. “Republicans definitely have to own what the Trump administration does. [As the majority] it is on them to allow us to debate these issues. It is on them to make sure we have reasonable legislation we can vote on. It is on all of their backs.”

Representatives from Mayodan, Eden and Reidsville went to the three-day conference, as they are Main Street communities.

“I don’t think there’s any question that our Main Streets reflect the spirit and character of North Carolina,” Cooper said.

“I grew up in rural eastern North Carolina. My mom and dad made me work hard on the farm every single summer until I went to college,” he said.

“I spent many a day in downtown Nashville, North Carolina. It’s where my church was, where the courthouse was… The dime store was there… anytime we fouled off a baseball in the weeds we had to get together our work money and go down to the dime store and buy a baseball.  It’s where we met and talked. It’s where I sold my watermelons that I grew.”

“Our downtowns do reflect that character, and I believe we know what our challenges are for our Main Streets in rural North Carolina… higher unemployment, trying to find and get that workforce, poverty, lack of broadband and other kinds of infrastructure like natural gas and water and sewer. That’s what this effort is all about, meeting those challenges,” he said of the NC Main Street program.

“One thing I know is that people in rural North Carolina can face challenges and can overcome them,” Cooper said. “And you out there, local elected officials, economic developers, town managers, county managers… you are doing it.”

He said as the state’s CEO and chief economic development recruiter, he has a mission statement.

“I want a North Carolina where people are better educated, where they’re healthier, where they have more money in their pockets, and they have the opportunity to live a more abundant and purposeful life,” he said, adding that conference attendees are helping fulfill that mission statement.

“You are helping downtowns get rebuilt and remodeled and retooled,” Cooper said.

“I am committed to bridging the rural-urban divide.  You don’t do it by pitting one against the other. You try to make sure that tide rises and we all float upward. And I believe we can do that,” he said.