Winston Salem Journal: Our view: A historic new chief justice
By the Editorial Board
February 13, 2019

Associate Justice Cheri Beasley, tapped by Gov. Roy Cooper to become the next chief justice of the North Carolina Supreme Court, will make history as the first African-American woman to hold that position. This is a sign of social and judicial progress that we find reassuring.

“This court this year is coming right at 200 years, and this is certainly not the North Carolina of 200 years ago,” she said during a news conference at the Executive Mansion with Cooper. “And so I’m excited about the fact that North Carolina has moved forward, that we do have a diverse court, and it’s so important that people feel good and have a confidence in the work that we do, and so I’m excited about continuing to do that work.”

Beasley is well-qualified for the position. She has been both a trial judge and a Court of Appeals judge, associated with the state judiciary for more than 20 years.

Cooper said that he’d considered several candidates for the appointment, but “Justice Beasley is the right person at the right time.”

“I know Justice Beasley to be fair and deeply committed to viewing all North Carolinians equally through the eyes of the law,” he added.

It’s unfortunate that her appointment was accompanied by a bit of grousing from Associate Justice Paul Newby, a Republican who has been on the court since 2005.

It’s also somewhat hypocritical when this public trust has already been eroded by his fellow Republicans.

Republican legislators have tried all kinds of ways to tilt the court in their favor over the last few years. In 2017, they drew new judicial district boundaries in an attempt to increase the number of Republican judges on District and Superior courts. They also reduced the size of the state Court of Appeals, depriving Cooper the right to name replacements for retiring Republicans, and passed legislation that demanded judges identify their party affiliation on ballots. This made North Carolina an outlier, the first state in nearly a century to adopt partisan court elections.

It’s also worth noting that in 1986, Republican Gov. James G. Martin appointed an associate justice, Rhoda B. Billings, a Republican, as chief justice over Associate Justice James G. Exum Jr., a Democrat and her senior on the court.

In the state of “To Be, Rather Than To Seem,” we should all want a judicial system that is fair, impartial and free of political bias. We believe most of our judges, Republican and Democrat, meet that standard. Beasley is one of them, and she should do us proud.

Burlington Times-News: Editorial: Beasley a good choice for chief justice
By the Editorial Board
February 14, 2019

We’ll ignore the political wailing and whining for a moment and cut to the bottom line: Gov. Roy Cooper made a good call in naming Justice Cheri Beasley to chief justice of the state Supreme Court. Beasley advanced in our legal system from public defender to respected District Court judge. She served with distinction, compiling a record that portrays a judge who puts constitution and law above politics.

Justice Beasley did the same on the N.C. Court of Appeals and then as an associate justice of the Supreme Court. We have no doubt she will be a capable leader for the state’s highest court and as chief of the state’s court system.

This sent Republicans into a frothy fury Tuesday after Beasley’s promotion was announced. Senate leader Phil Berger said he was “disappointed that Governor Cooper has ignored the decades-old precedent of appointing the most senior member of the court as chief justice. A reasonable conclusion is that he decided to pass over Justice (Paul) Newby because of his party affiliation.” Berger is one of the chief drivers of policy changes that have heavily politicized the state’s court system, especially at the top. Because of his efforts, what was once a nonpartisan judiciary has joined the political polarization that has afflicted the rest of state government.

We expect Beasley won’t be tempted to play politics but rather will attend to running the nonpartisan judiciary Newby refers to. So far, we have no reason to doubt Cooper made the right decision. 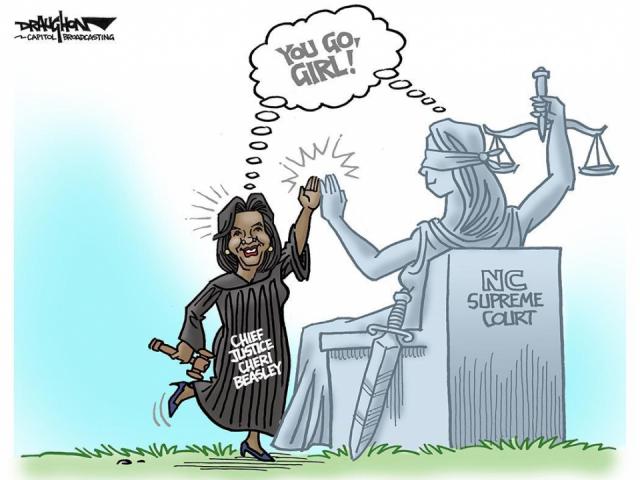