Raleigh – Last week, the hammer dropped on Senator Tillis for his spineless “Olympic Gold flip flop” on the president’s emergency declaration, forcing Tillis to relive “one of the senator’s weakest moments” and earning him a fresh round of negative headlines and condemnation from around the state and the country.

Voters asked Tillis to “explain himself to the soldiers.” The Charlotte Observer editorial board blasted Tillis for “an $80 million punch to the gut” and offered a piece of advice: “when you buy political favor in exchange for your principles, the bill is always more than you thought it would be.”

Cable TV was, uh, a bit more blunt… “He just stole $80 million from your state! How WEAK are you?”

Here’s a look at what voters saw about “Senator Hypocrisy (R-N.C.)”: 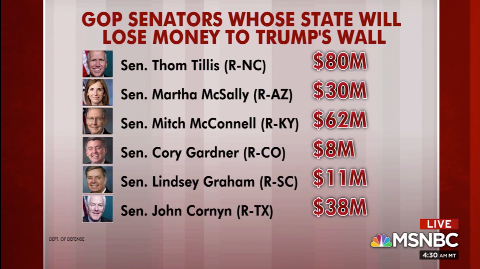 The Hill: Hurricane-hit bases among those losing funds to Trump wall
By Ellen Mitchell
September 4, 2019