Raleigh – Republican spin around the Atlantic Coast Pipeline (ACP) fund has turned into outright lies. When the GOP Majority Leader was confronted with the fact that the ACP fund was meant to help fund new gas hook ups, allowing local communities to tap into the pipeline, Sen. Brown outright lied to his constituents, saying, “First time I’ve heard of that.” 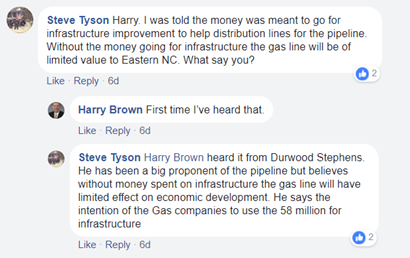 To refresh Sen. Brown’s memory, here’s AP from when the news first broke:

ACP and its partners Dominion Power and Duke Energy will put $57.8 million into the fund to be used for environmental mitigation initiatives such as reducing the carbon footprint and expansion of renewable energy sources. Funds can also be used to ensure that local communities benefit economically from the pipeline by having access to natural gas from the pipeline. ACP did not guarantee affordable access to natural gas for communities through which the pipeline will run.

Here’s WRAL’s deep-dive into how the fund was established:

Much of the money would have been used to help companies and farmers in eastern North Carolina hook into distribution lines tied back to the pipeline, covering the cost of expensive last-mile infrastructure that has to be built before gas can flow, the administration has said.

Here’s internal emails from the Commerce department worried about paying for the gas hookups:

Commerce’s primary concern, the emails show, involved the ability of North Carolina companies to directly tap into the pipeline for their own natural gas needs.

Here’s the letter from the Governor’s office to GOP leaders answering questions about the fund:

Republicans, desperate to find a political scandal to undermine Governor Cooper in an election year, raided a $58 million fund which was established to bring economic development and jobs to eastern North Carolina. That economic development included, as the Governor’s office outlined from day one, paying for gas taps that allow local communities to access the ACP.

Republican’s plan backfired, enraging their base in eastern NC who heard ads for a yearpromising new jobs and economic growth from the pipeline. Now, Republicans are resorting to lying to their constituents because they realize those jobs are threatened by the partisan, election-year games.

“Eastern North Carolina deserves to benefit from the Atlantic Coast Pipeline, and this pipeline fund was set up from day one to ensure just that,” NCDP spokesman Robert Howard said. “Republicans are resorting to misleading and lying to their constituents because eastern North Carolina is furious – for good reason – that Republicans jeopardized good jobs to play petty partisan games.”