This comes as no surprise to anyone who’s heard Rep. David Lewis crowing about drawing maps that give Republicans the biggest possible advantage – or really anyone who’s seen the maps…

The court said voters deserve to choose their representatives, not the other way around. We wholeheartedly agree.

Legislative Republicans were back in Raleigh on Monday taking a second stab at steamrolling our state’s constitution to protect their seats this November.

This time around, Republicans want to establish a 4-4 State Board of Ethics that would not only be destined for gridlock (just look at the FEC), but would create a massive conflict of interest. A board created by legislators, chosen by legislators, tasked with investigating the shady dealings of legislators…what could possibly go wrong?

Republican lawmakers are trying to insulate themselves from investigations into their shady behavior by creating a toothless agency that’s designed to fail. Voters can’t let them succeed.

“Take this envelope, put money in here.” That’s NC GOP Chairman Robin Hayes, who was caught last week saying he could accept “unlimited money” from donors and promising to earmark funds for a specific candidate – a big no-no in the world of party politics. Federal law prohibits the NC GOP from reserving funds for specific candidates and limits how much money the party can raise.

Republicans will do anything, including breaking election laws, to try and save themselves from a blue wave year. It won’t work.

Harris is out of step with 21st century values. According to Harris, women should “submit” to their husbands and reconsider having a career as it may not be “the healthiest pursuit.” Gross.

Budd, meanwhile, has made headlines as one of the “Worst House Republican Slackers” given his inability to raise money, hence Trump coming to town to float his campaign coffers.

Aligning with a president who’s just as out-of-touch isn’t going to do Budd and Harris any good against strong Democratic challengers Kathy Manning and Dan McCready. (Seriously…Harris is so desperate for a line of attack that he tried to hit McCready on not having a record of misogynistic sermons.) But that won’t stop them from trying.

REPUBLICANS GIVING UP ON TARTE?

It’s shaping up to be a bruising election season for Republicans. With limited resources, expanded maps, and massive Democratic enthusiasm, the GOP is being forced to make some tough decisions about which lawmakers they can save and who they’ll have to “cut loose.”

Which got us thinking…. wasn’t Sen. Jeff Tarte supposed to propose a bill on I-77 to try and breathe a little life back into his floundering campaign? Why wasn’t he given the chance?

Has Phil Berger already deemed the race unwinnable and made the “difficult choice” to cut Sen. Tarte?

First Trump. Then Tarte. Now, almost every single Republican legislator has signed onto an open letter calling for the confirmation of Brett Kavanaugh in a last-ditch attempt to turn out their base and save their seats this November.

Sure, it’s tough out there right now. But trying to tie yourself to a federal judicial confirmation that you have no influence over, and that might be finished before November, seems a bit desperate…

This week, under the guise of helping North Carolinians recover from Hurricane Matthew, Republicans used an oversight committee to engage in some good ol’ political theatre. Lawmakers asked plenty of questions… but Cooper officials in the audience weren’t allowed to provide any answers. 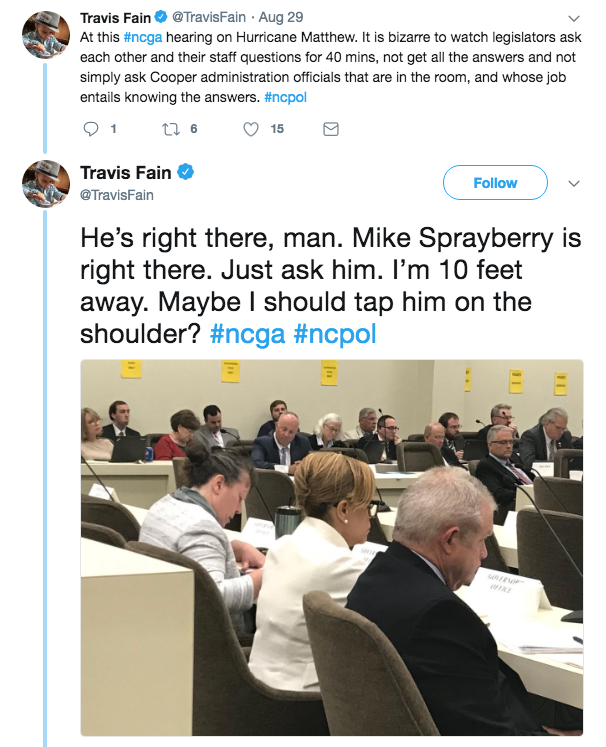 But legislative Republicans weren’t looking for answers – they were looking to rattle off conservative talking points and grab some B-roll for their campaign ads.

ANGLIN OFFICIALLY ON THE BALLOT

The Republican scheme to rig North Carolina’s Supreme Court race in favor of their preferred candidate has officially backfired. Chris Anglin will get to keep his party affiliation, meaning voters will see two Republicans and one Democrat on the ballot this November.

Maybe the GOP will learn from this and finally put a stop to their scheming – but don’t hold your breath.

Democratic ads are hitting the airwaves this week, with strong Democratic candidates hitting vulnerable Republicans for their failure to fight for North Carolinians:

Last weekend, 700 fired-up volunteers knocked more than 20,000 doors statewide during the NCDP’s second Weekend of Action. At 49 events from Waynesville to Elizabeth City, volunteers and supporters heard from strong Democratic challengers before hitting the pavement to talk to voters in their neighborhoods about the importance of breaking the Republican supermajority. The enthusiasm gap just keeps growing.

WATCH the video from the first Weekend of Action HERE. 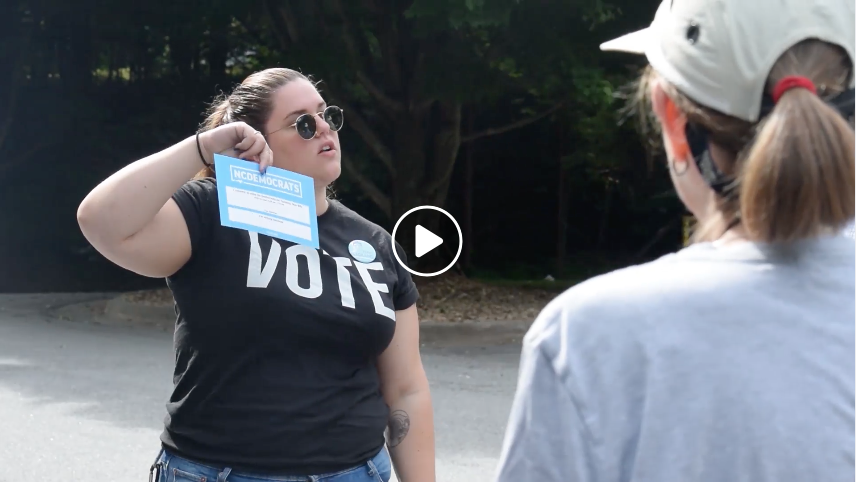 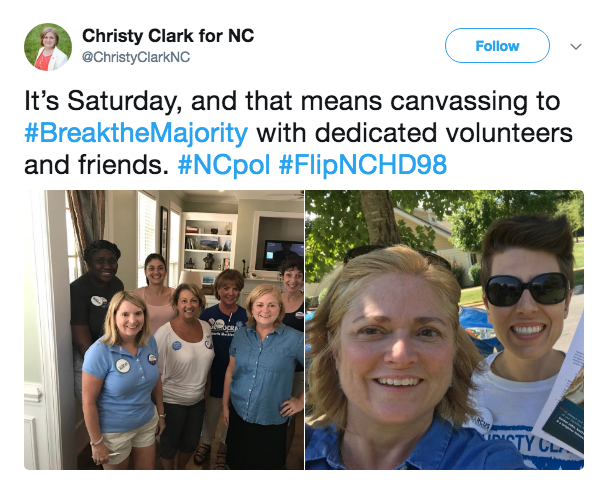 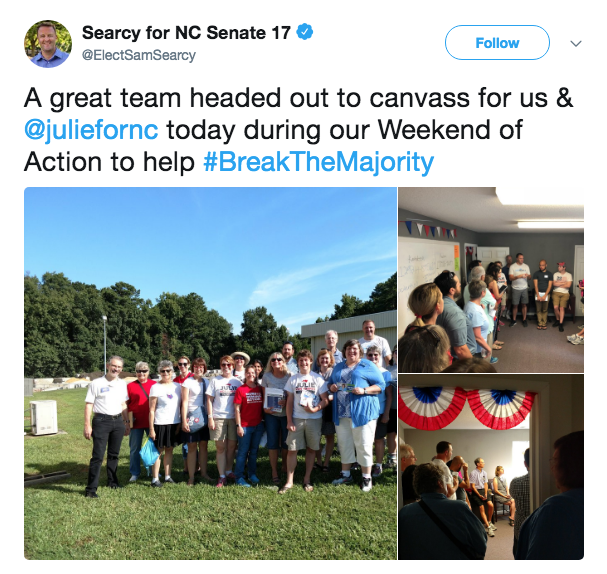 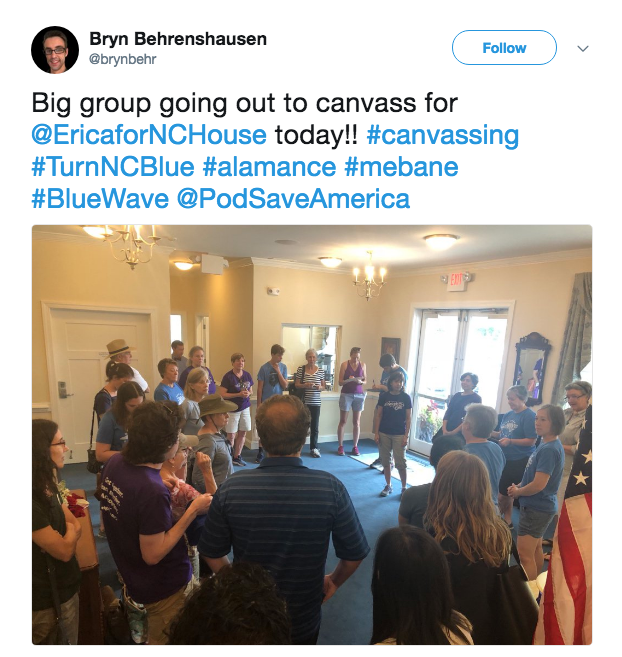 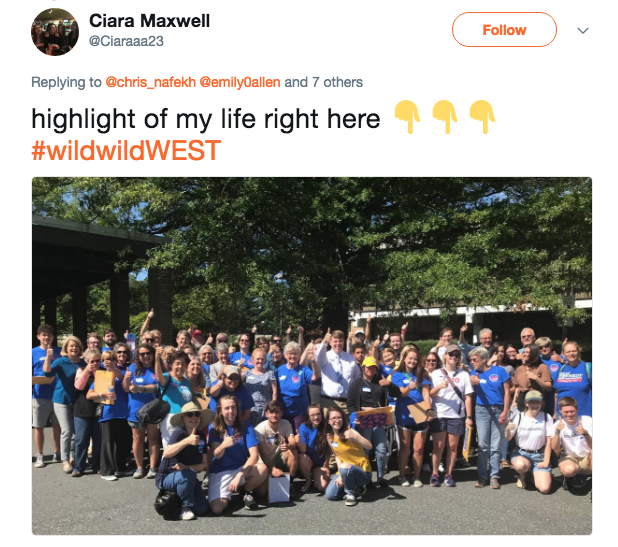 This week, Democratic candidate Sydney Batch (HD-37) announced that she has been diagnosed with breast cancer, but will continue her campaign following treatment. The diagnosis only reaffirms Sydney’s commitment to fighting for affordable health care for all North Carolinians. From Sydney:

“Because of my access to health insurance, I was diagnosed early. I will be able to take time off work and the campaign trail to recover. But many women would not be able to do so because they have to work and don’t have medical leave or vacation time. Worse still, others won’t receive treatment at all because they don’t have access to health insurance. And that is the reason I will continue our campaign.”
WRAL: 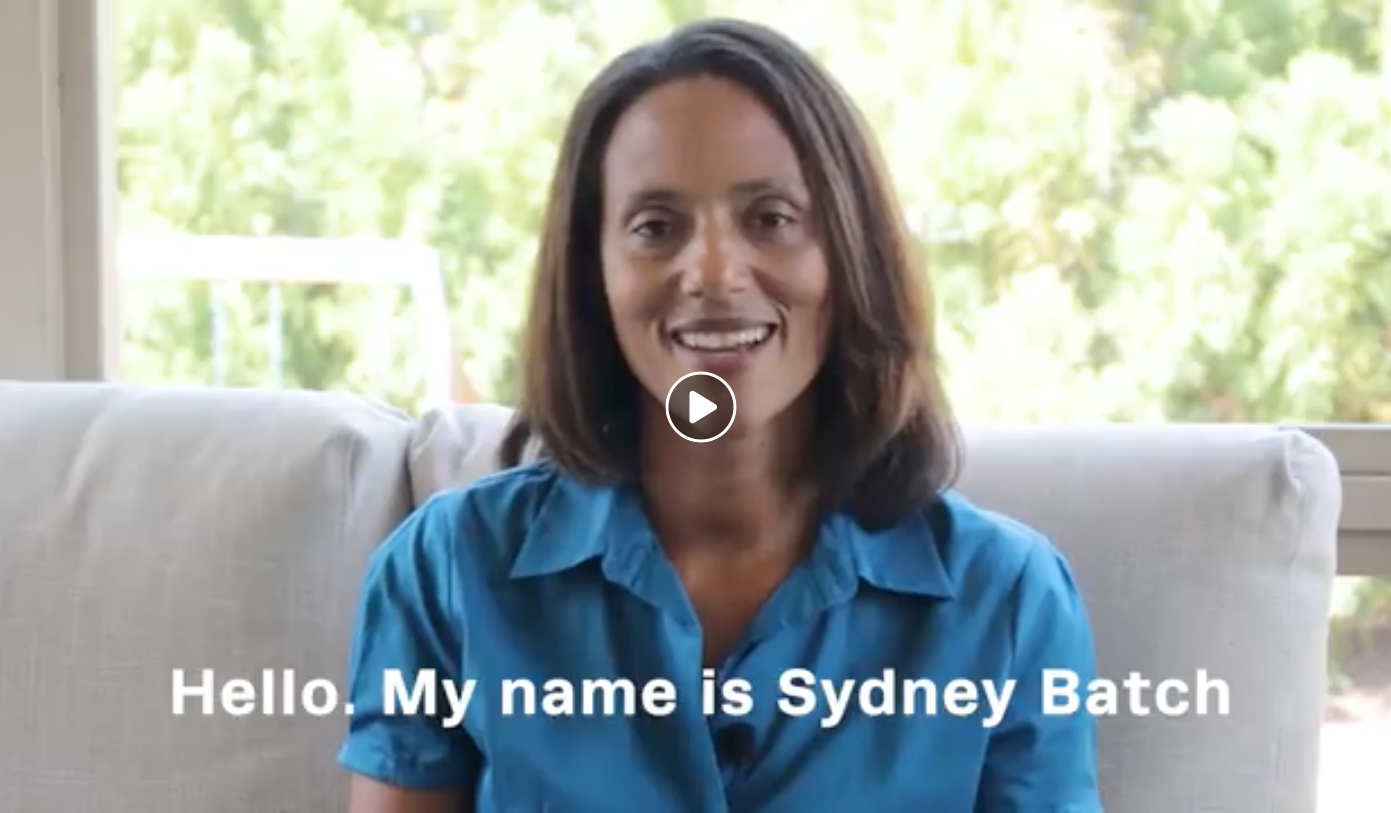 WHAT EDITORIAL BOARDS ARE SAYING THIS WEEK…

On the Republican legislature’s power grabs…

N&O:
“These constitutional amendments make a farce of good government. This is what power does to people who let it get the best of them. Legislative Republicans have proven they’re dangerous with veto-proof supermajorities. There’s only one sure way for North Carolinians to put an end to these power-grubbing follies. That’s at the polls this November. These Republicans have lost their way.”

On the NC GOP’s constitutional amendments…

News & Record:
“This is ridiculous to the sublime because none of these amendments rises to the level of constitutional protection and are only being used to verify future political power. None should be on your ballot, no matter how they are described, and they form an insultingly bad idea regardless of which party is in charge. They represent a power grab in four cases and bad government in five of them.”

Winston-Salem Journal:
“The six constitutional amendments will likely still be on the ballot, so it will be up to voters to educate themselves, as well as their friends and neighbors, about their true purpose. Everyone should vote against them, and then perhaps vote against some of the people who are trying to manipulate us into passing them. This hungry grab for more and more power is not in the best interest of anyone in North Carolina, no matter the party.”Top of FormBottom of Form

Fayetteville Observer:
“On statewide races and issues, this state tends “purple,” sometimes selecting Democrats and sometimes Republicans, usually in a fairly close vote. Logic would dictate that our congressional delegation and our General Assembly would reflect that balance. But thanks to the wonders of computer-generated electoral maps, the Republicans have given themselves a completely unrepresentative grip on the political process… It’s time, once and for all, to end the kind of gerrymandering that has become the very antithesis of democracy. We’ve got to do better than this.”

Star News:
“State Republican leaders are accusing the courts of meddling in an election. Of course, one person’s meddling is another person’s petition for “equal protection of the laws,” as guaranteed by the 14th amendment. Want to keep our election process out of the courts? We do too. So here’s an idea — draw a map that is so obviously fair and so faithful to the ideal of representative democracy that anyone calling it unconstitutional would get laughed out of court.”

Charlotte Observer:
“Have you heard this before? Yes. The American worker is falling further behind, here and across the country. The president’s solution for that? Another corporate tax cut.  It’s not working. We won’t stop saying so. You shouldn’t stop caring. The American worker, still among this country’s most valuable asset, deserves better.”

Have a great long weekend!

SHOT/CHASER: NCGA Leaders Breathlessly Complain About the Sanctity of Our Elections, “Impossible” Timeline