A FRIDAY SPECIAL SESSION IN AUGUST

Aaaaand we’re back, folks. Republicans have returned for yet another impromptu session, this time to take a second shot at writing deceptive ballot language for their constitutional amendments that steamroll our state’s separation of powers.
WRAL:

Opposition to these amendments is so bipartisan that former Republican Governors Pat McCrory and Jim Martin wrote their legislative counterparts asking them to use this session to remove the amendments from the ballot entirely.
Charlotte Observer:

GOP WANTS TO PICK WHO POLICES THE LEGISLATURE

House Republicans voted today to put a deceptive constitutional amendment on the ballot that would turn the State Board of Elections and Ethics into a 4-4 body handpicked by the legislature.You read that right – a body created by legislators, with members handpicked by legislators, responsible for investigating ethics and corruptions complaints against legislators. Not only is it a clear conflict of interest, but it’s designed to fail. With an even bipartisan split, the body will be defined by gridlock – just look at the FEC.

But Republicans aren’t concerned, as long as it insulates them from investigations into their shady behavior.

VULNERABLE REPUBLICANS ARE ON THE HOOK FOR SPECIAL SESSION…

How are vulnerable Republicans like Sens. Tarte, Barringer, and Meredith and Reps. Bradford, Dollar, Davis, and Grange going to explain that not once, but TWICE, they returned to session to try and mislead the voters to save their own skin instead of focusing on the issues voters really care about – expanding access to affordable health care, fixing the I-77 toll roads, voting on funding for public education, and cleaning up our waterways.Is Sen. Tamara Barringer even going to show up this time?

… DEMOCRATIC CANDIDATES ARE HOLDING THEM ACCOUNTABLE…

Democratic candidates are holding their vulnerable opponents accountable for returning to Raleigh:
“Ted Davis, Jr., is wasting even more taxpayer dollars holding another special session to once again undermine our state’s separation of powers instead of doing anything to stop the GenX crisis. Even his own party said Davis’ cleanup bill did “nothing,” while putting a financial burden on taxpayers that should be carried by polluting companies…People across southeast North Carolina are paying close attention and aren’t going to be tricked by Ted’s political theater—and they don’t appreciate his playing with their health and the health of their children.”
– Marcia Morgan, HD 19“Voters know Raleigh politicians like John Sauls are up to no good when all living former governors – 2 Republican and 3 Democrat – oppose the General Assembly’s radical ballot measures. Now these same power-hungry politicians are spending more time and taxpayer money trying to deceive voters rather than addressing vital issues like school funding. John Sauls is absent in the school construction bond debate, guaranteeing that hundreds of our kids in Lee and Harnett counties will continue to attend classes in cramped trailers. Voters have had enough. They want legislators that will lead with fairness and common sense. It’s time to stand up and do what’s right for our people – regardless of political party.”
– Lisa Mathis, HD 51“New Hanover county voters want a representative who’s focused on ensuring clean drinking water for our citizens, not deceiving them to save their political seat this fall. I’m running because voters deserve someone who will fight for clean water, not partisan political games. Representative Grange will send a clear message if she comes back for yet another special session to destroy our state’s separation of powers instead of fighting for clean water for New Hanover. People in southeast North Carolina are watching – and they will make their voices heard.”
– Leslie Cohen, HD 20

… AND THE NCDP IS GETTING THE WORD OUT

The NC Democratic Party is spreading the word about Republicans returning for yet another deception session instead of fixing the issues that matter most to North Carolinians. Voters across North Carolina are receiving targeted digital ads and mailers aimed at holding vulnerable Republicans accountable for their attacks on our state’s constitution. 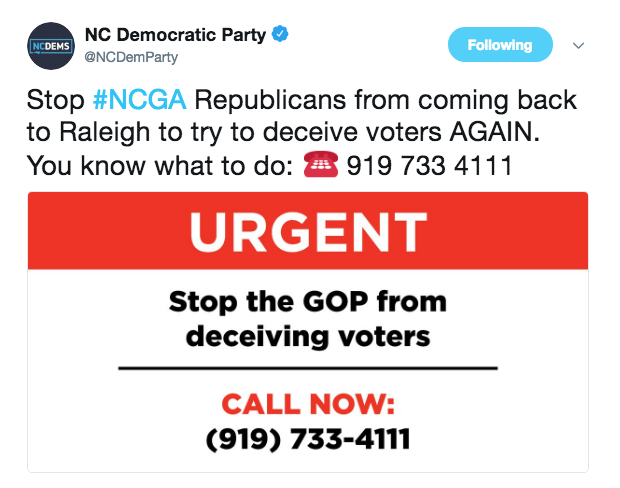 North Carolina’s teachers are demanding the Republican lawmakers do something to fix the unacceptable conditions of our state’s public education system:
“With some classes nearing 40 students, how will we provide the best education for all of our children? How will we close achievement gaps?”
– Wendy Kreitman, 8th grade social studies at Daniels Middle School“If they really understood what we do, they would be rallying with us to tackle the big problems with our systems,”
– Rebecca Costas, Myer’s Park High School“Given the state’s constitutional mandate to educate all children, why is student access to and full participation in the educational program so dependent upon ZIP code and charitable giving? In short, it should not be.”
– Tommy Rebant, 5th grade at Leesville Elementary
Seems like legislative Republicans could do something to help out our teachers seeing as they’re back in session today – like maybe putting a $1.9 billion bond for school construction on the ballot – but they’re too busy trying to save their own skins.
N&O:

All six of North Carolina’s former chief justices announced their opposition to two of the GOP’s dangerous amendments this week, saying:
“All of us will vote against these two amendments. We urge you to vote against them. And, we urge you to join us in advocating for their defeat,”
The justices are the latest to join a long list of bipartisan opponents including all five of North Carolina’s living former Governors.
WRAL:

NCGOP ADMITS AMENDMENTS ON THE BALLOT TO BYPASS COURTS

“We now have a different state Supreme Court that could go back on its own precedent anytime it wanted,” Woodhouse said.

But courts can’t override the will of the people as expressed in the North Carolina constitution, he said

Republicans are deceiving voters with misleading amendments, forcing the voters to do their dirty work, because they know their laws would be struck down by the courts. And they’re not even trying to hide it. 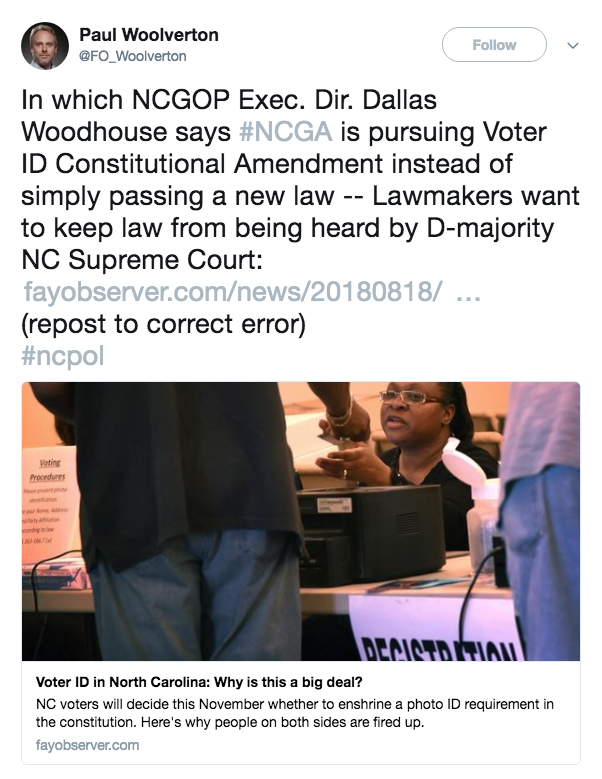 Republican legislators know their inaction on the I-77 toll mess is going to cost them their seats this November. Unfortunately for them, they’ve already made their bed. (#TBT to when Sen. Jeff Tarte voted for a budget that made it harder for the state to cancel the toll contract.)

Now, Tarte is desperately trying to get as far away from the tolls as possible: 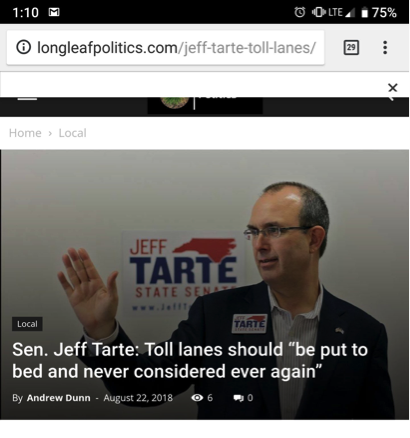 It’s a little late for that… 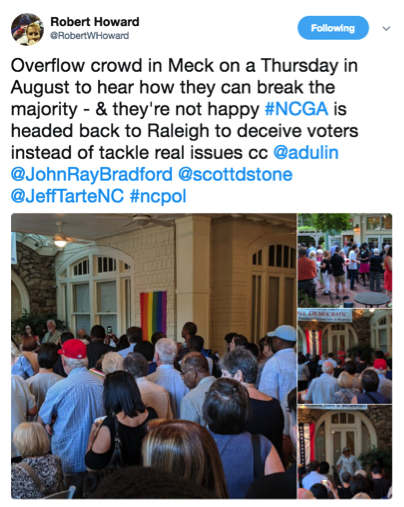 On this week’s special session…Fayetteville Observer:
“… no matter, the cat is way out of the bag on these amendments. The attempted flimflam has gotten plenty of publicity and most voters are likely to know what’s up, no matter how the questions are reworded.  little honesty from the outset would have been better, but the drama of legislative leaders getting caught attempting a scam has been pretty educational too.”On the GOP’s threat to impeach Supreme Court justices…

WRAL:
“How low can anyone stoop in North Carolina politics? Woodhouse showed us. Neither Senate leader Phil Berger, R-Rockingham, nor House Speaker Tim Moore, R-Cleveland, has unequivocally denounced the threat. Berger’s office used it as an opportunity to rail against “activist judges.” Moore’s public relations aide simply said “House leaders have had no discussions” about it… Have things become so extreme that we have to wonder if judges and justices are still able to rule on the law without intimidation and threats of impeachment and removal from office?”

Oh also, Trump’s former lawyer Michael Cohen implicated the President in a federal crime… but you knew that already.

Have a good weekend!