In a united show of opposition against the Republican legislature’s deceptive tactics and power grabs, all five of North Carolina’s living former governors – Democrat and Republican –  spoke out against two of the GOP’s proposed amendments this week. These attacks on our state’s separation of powers go beyond partisanship – as GOP Gov. Martin said, this is about power politics and the voters must reject them this November.
“This effort that we oppose on a strong bipartisan basis is against a few politicians in the legislature increasing their powers at the expense of the people of North Carolina.”
– Gov. Jim Hunt (D)“After a career devoted to building a more competitive two-party system in our state, it’s embarrassing to me that it’s a legislature controlled by my Republican party that has hatched this scheme and thought they could get away with it.”
– Gov. Jim Martin (R)

“As I read these amendments, I couldn’t find anything that did one thing to help the people of North Carolina.”
– Gov. Mike Easley (D)

“My advice to the hardworking legislators… if any of you want to take on the responsibilities of governor then have the courage to run for governor. And win. Earn it.”
– Gov. Pat McCrory (R)

TARTE, GOP STAND IN THE WAY OF FIXING I-77

This week, DOT Secretary Trogdon announced recommendations to deal with the I-77 toll mess, including toll caps and frequent user discounts. DOT had to get creative, because even though cancelling the project is the ultimate goal, Republican legislators tied the state’s hands in their budget.Who voted for the budget? Sen. Tarte and every Republican legislator now crying foul.

Meanwhile, all Sen. Tarte can offer is an unserious proposal that will cripple transportation projects across Mecklenburg county just to save his seat. 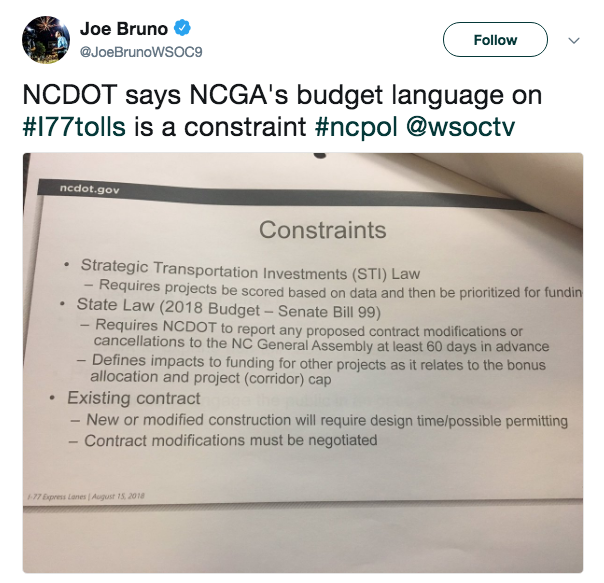 At a panel discussion this morning, NC GOP Executive Director Dallas Woodhouse threatened to impeach or remove any Supreme Court justices who votes against the legislature’s constitutional amendments. Dallas said voting against the amendments would be a “constitutional crisis” before reciting exactly how many votes the GOP needs to impeach and remove justices.
N&O:

The million-dollar question, though, is what do Berger and Moore think about this plan? Dallas says, “I do not believe” legislators have discussed it – but that’s not a clear answer.
Do Speaker Moore and Senator Berger plan to take inspiration from West Virginia?

Republican SD-1 candidate Bob Steinburg got a $50k no-bid contract from the Currituck County with the help of his buddy and HD-6 GOP candidate Bobby Hanig to fund a basketball tournament on the other end of the state. Taxpayers… aren’t happy. From Democratic candidate Cole Phelps (SD-1):
“There’s not a day that goes by that I don’t hear about it when I’m on the campaign trail,”
Phelps has come out against the contract, saying:
“…what makes it wrong is that this is a contract that he entered into behind closed doors with the manager in Currituck County — and took $50,000 from the taxpayers of Currituck County.”
Meanwhile, Steinburg refuses to comment, raising questions about how and why Steinburg got the contract and what role Hanig played.
Daily Advance:

ICYMI: WAPO: AN ASSAULT ON MINORITY VOTING CONTINUES IN NC

In a state infamous for voting restrictions and bills that target African-Americans with “surgical precision,” 12 North Carolinians convicted of felonies – 9 of whom are African American – are being prosecuted for unintentionally voting illegally. From the Washington Post editorial board:
“…context matters. This is North Carolina, where African Americans’ voting rights have been under siege. It is preposterous to impose prison sentences on people who cast an illegal vote without intending to break any law. And, even short of prison time, prosecution itself can leave an indelible stain on an individual’s record.”
Washington Post:

This week, NC courts thwarted yet another attempt from Republican lawmakers to rig our elections when they ruled that Republican challenger Chris Anglin will keep his party affiliation on November’s ballot. The GOP bill to remove Anglin’s party was a last-ditch attempt to help Republicans’ preferred candidate when their plan to cancel judicial primaries backfired.
N&O:

Yesterday, Governor Cooper visited Fayetteville to launch Break the Majority’s newest field office. The Governor encouraged a crowded hallway of supporters to get involved and support their local candidates every day until election day:

“We need you every single day to be making telephone calls and knocking on doors, because what this is about is our children’s future and our grandchildren’s future. This is about getting a General Assembly that will help me get quality teachers in every school and quality principals in every school. Public education matters, and this majority in the legislature does not believe that.” 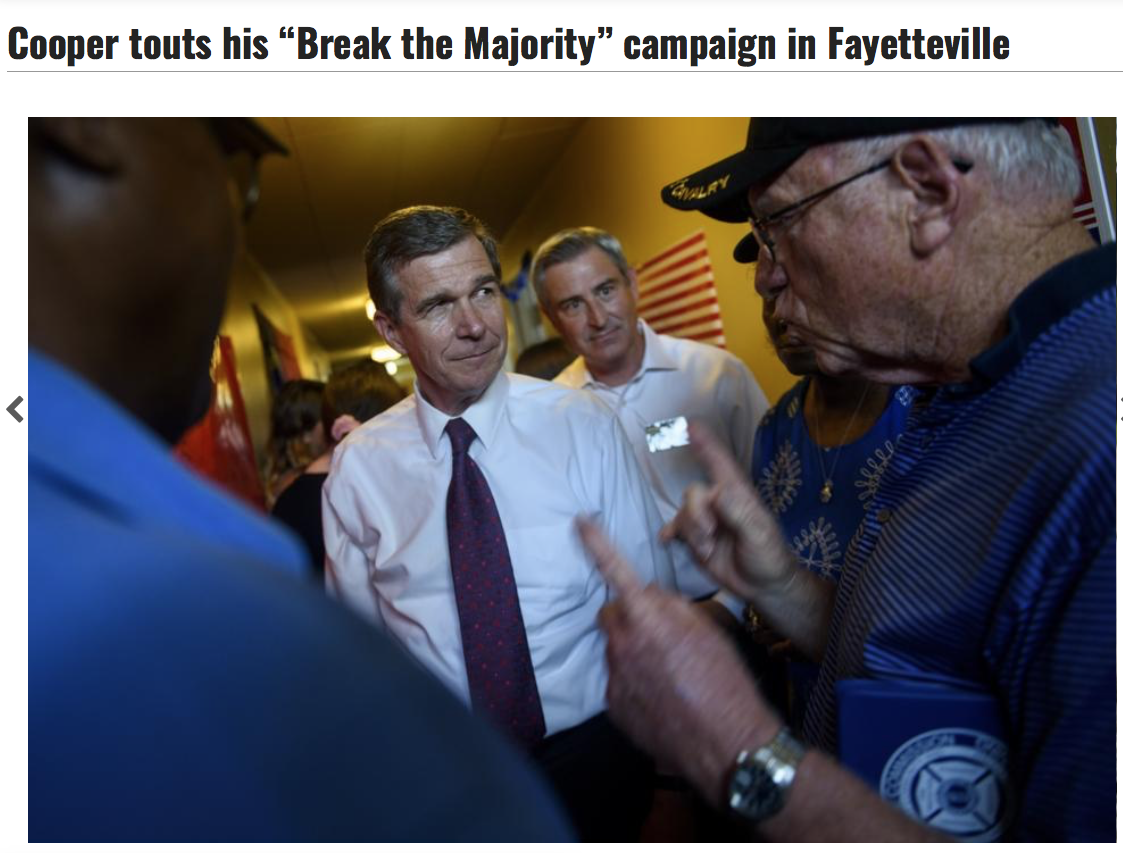 NCDP hosted the inaugural event to celebrate, connect, and strategize with women of color across the state. Women of color are the backbone of the Democratic party and NCDP is fighting to ensure they have a seat at the table and that their voice is heard. 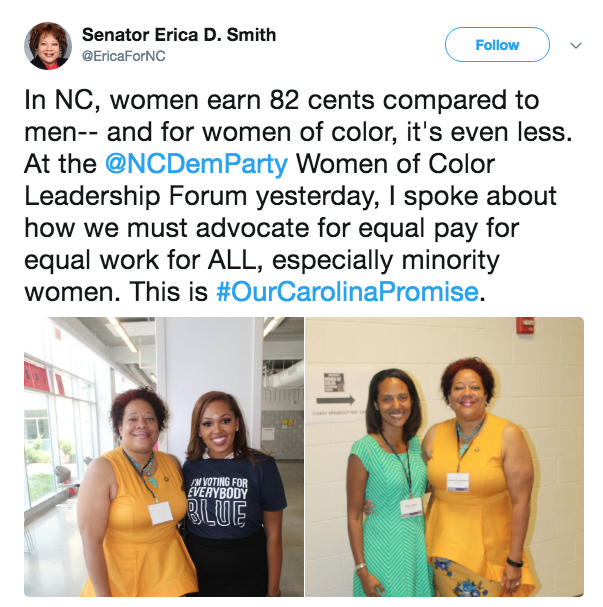 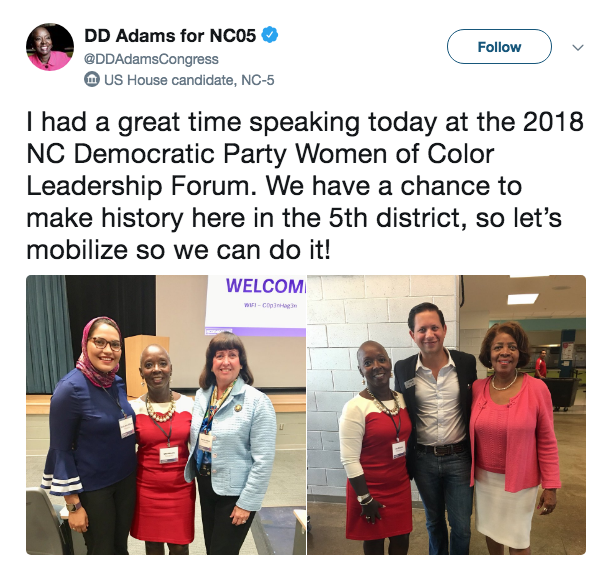 WRAL:
“They fought in court to uphold the laws that eliminated judicial primary elections and set out a different election process. There is little reason, other than a stubborn notion that insisting what is wrong is right will somehow make it so, to continue the legal fight. It may not have been what legislative leaders intended, but it is what they did and they’re stuck. Continuing the battle won’t change the rules, just waste taxpayer dollars. It will be a vivid reminder of just who has been working to manipulate elections and distort the will of the voters.”

On governor’s opposition to amendments…

Fayetteville Observer:
“…there they were Monday, all five living former governors of North Carolina, two Republicans and three Democrats, together on the same stage for the first time ever, singing in perfect harmony. They used words like “devious” and “mischievous” and “hijacking our constitution.” They talked about the shredding of gubernatorial power and the checks and balances that are built into the North Carolina constitution. And they were right.”

WRAL:
“These five people, even giving the partisan diversity, have vastly different styles and approaches to governing and leadership. The fact that they so clearly and firmly agree on the harm these constitutional amendments will produce, is a condemning indictment… Voters should take their warnings and worries to heart.”

On President Trump’s attacks on the press…
Daily Reflector:
“Trump’s continual refrain that any coverage critical of him is “fake news” has had a profound and damaging effect on journalists’ credibility. And that’s bad for our country and our community. We are not the enemy.”Star News:
“Yes, members of the press sometimes get facts wrong. When they do, they are held accountable by their news organizations as well as others in the industry, and far more often than not, the error is acknowledged in the form of a timely correction. The same cannot be said about this president.”

Fayetteville Observer:
“We hope the president will abandon his increasingly damning slurs of the entirety of the press and its legitimacy as an American institution. We hope for it, but we’re not holding our breath. Rather, we hope all the president’s supporters will recognize what he’s doing — manipulating reality to get what he wants.”

News & Record:
“When you hear our president say that “the media is the enemy of the American people,” what you really should be parsing is that he believes there should be restrictions on how your government and elected officials should be covered, that there should be prohibitions on that flow of information. This in direct contradiction to the principle that the framers of our Constitution gave first priority.”

News & Observer:
“President Donald Trump has veered into unfamiliar and perilous territory with his unceasing all-out assault on the free press and the First Amendment. Of course, the irony of Trump’s attacks on the “SICK!” and “very dishonest people” in “the fake media” he accuses of purveying “fake news” is that he himself is a product of the New York tabloids. He’s as savvy about manipulating his coverage as he is adept in undermining it.”

Blue Ridge Now:
“If people listen only to news and information that tell them their opinions are accurate, that they were right in their beliefs all along, it becomes much harder for them to examine and understand other viewpoints. It also becomes much easier to fool them with genuinely fake news if it is presented from their perspective. In the end, the truth suffers.”

WRAL:
“Donald Trump doesn’t have to like the individual journalists who cover him. He doesn’t have to like what they report. But he does have to respect – as president of a nation founded on a principle of press freedom – the work they do. Journalists, no less than anyone else in the president’s universe, are patriots and not enemies.” 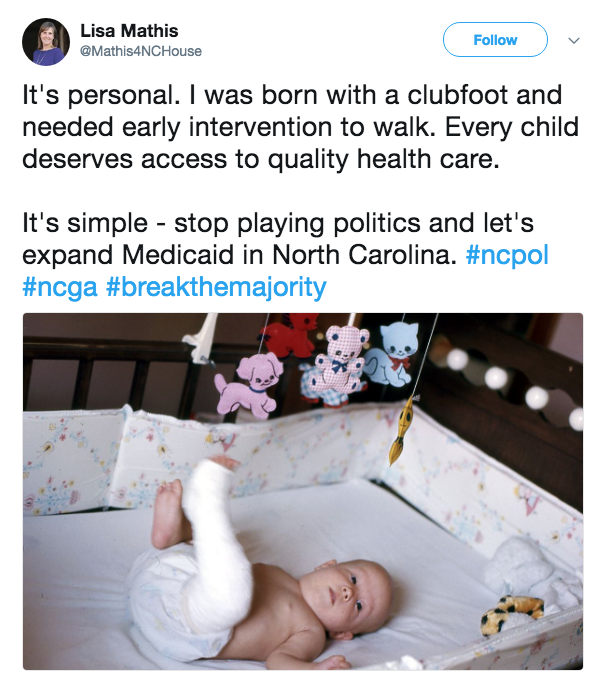 NCGA Republicans, Sen. Tarte Gave I-77 Tolls the Green Light Before Being Against Them