ANOTHER TEACHERS MARCH, ANOTHER HUGE SUCCESS

A “sea of red” flooded downtown Raleigh as teachers criticized Republican leaders for failing to make public education a top priority. The energy was high, but patience with nearly a decade of attacks on public education was very low.

The rally went beyond Raleigh …
Teachers across the state who couldn’t make it downtown to march rallied in solidarity in their hometowns and classrooms. North Carolina teachers have had it with Republican lawmakers’ attacks on education – and that anger extends beyond the thousands who marched in Raleigh.
WECT: 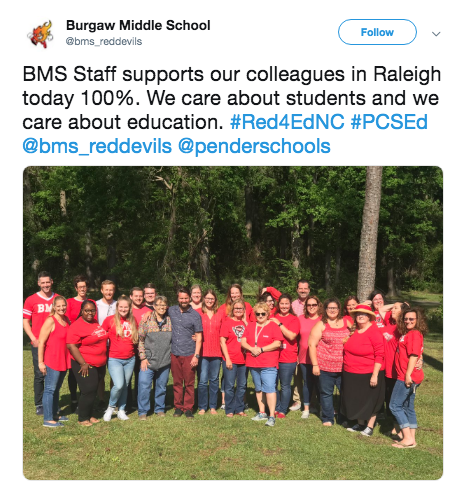 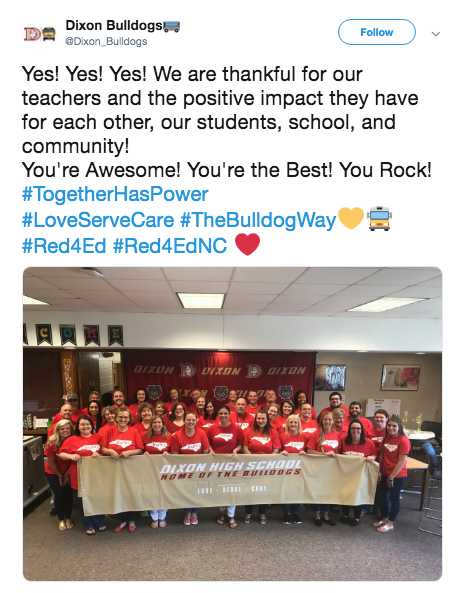 And it was about much more than teacher pay …

Roosevelt Williams, Durham County Bus Driver/Custodian: “If bus drivers don’t get the kids to school, there’s no one to teach. And if custodians don’t clean the school, then it poses a hazard to everyone… A lot of my coworkers and friends are working two jobs to make ends meet.”

Keena Proctor, Buncombe County Teaching Assistant: “Can you believe I’ve taught for 26 years, but I only make $12.47 an hour? Think about it.”

Dawn Davis, Guilford County Teacher: “We’re 50 short [on bus drivers] about every day, and our buses are late for school because drivers are scrambling.”

Tahitian McKenzie, Bladen County Teacher: “We’re concerned for our pay. Not just teachers. For all school personnel: Custodians, bus drivers, cafeteria workers. We’re all in this together.”

April Leon, Wake County School Counselor: “What ends up happening is, we’ll have a student that wants to come to us and seek out help. But we’re in the middle of helping somebody else. And we’ll be like ‘We’ll get back to you.’”

Jen Raschella, Wake County Teacher: “Sometimes we have to send kids to the office with cuts to broken arms to teeth falling out and the secretaries are the ones that have to handle everything right now.”

Over the past couple of weeks, North Carolina Republicans have made it clear where they stand on public education. Instead of listening to teachers, Republican leaders have attacked them, lied to them, and tried to silence them:

… Last Thursday, Lt. Gov. Dan Forest said the issues teachers are talking about “have really been taken care of” and that “nobody is forcing [teachers] to take any of these jobs. They’re volunteering to take these jobs.”

… Last Friday, House Republicans revealed a provision in their budget that would block future rallies in an attempt to silence teachers.

… On Tuesday, as teachers prepared to trek to Raleigh, the House GOP conveniently announced their budget proposal on education, touting “historic investments.”

… But Wednesday night, once the teachers had left Raleigh, Republicans revealed the details of their plan – and how they lied to teachers. Turns out, Republicans’ teacher raises, already only a portion of what Governor Cooper proposed, won’t kick in until halfway through the school year, essentially halving the income they originally promised. On top of that, those raises would only go to veteran teachers, leaving out anyone with less than 15 years of experience.

While Republicans were busy attacking, lying to, and trying to silence teachers, North Carolina Democrats were advocating for our educators, our schools, and our children by championing proposals that put public education first like:

TEACHER RALLY CAN BE TRACED TO TILLIS’ FAILED LEADERSHIP

The roots of the teacher rally can be traced back to Senator Tillis’ failed leadership. As speaker of the North Carolina House, Tillis presided over bottom-of-the-barrel teacher pay and slashed education spending while cutting taxes for the wealthy and corporations. During his speakership, Tillis passed a budget that:
While teachers faced deep cuts and crowded classrooms, Speaker Tillis passed a tax bill that overwhelmingly benefited the wealthiest North Carolinians and corporations.

Even senior leaders under Tillis admitted:

“Yes, you can go back and say if we didn’t cut taxes we would have money for education.”

This week, fourteen North Carolina business executives penned a letter to the General Assembly calling on legislators to expand Medicaid. The letter underscores the importance of workers’ access to quality insurance to ensure their good health. After all, a healthy workforce, the group notes, means an overall stronger workforce and therefore a robust, strengthened state economy. From the op-ed…
“As business leaders in the State of North Carolina, we know firsthand that a strong workforce is essential to North Carolina’s economy. We also know that employee health is a big contributor to the strength of our workforce.

“A big contributor to good health is having insurance. People with health insurance are more likely to see a doctor when they get sick and have better overall health. And healthier employees are more productive and absent less.

“Unfortunately, 13 percent of North Carolinians under 65 are uninsured. These are our neighbors – they are construction workers, retail employees, restaurant workers, veterans and farmers; they are the bedrock of our communities. Currently, a family of four with working parents cannot earn more than $9,000 to qualify for Medicaid. But they earn too little to qualify for federal subsidies to buy their own insurance.  They fall into a coverage gap.

“The good news is that we can follow the lead of 37 red and blue states and close the gap. Doing so would allow an estimated 500,000 North Carolinians to gain access to affordable health care.”

Courier-Tribune:
“Will this be the year North Carolina joins the 36 states that have expanded their Medicaid programs to cover the “working poor”? It should be. There are no legitimate reasons remaining to refuse to participate in the federal program that helps states broaden Medicaid coverage, at little or no expense to the state. There will be no honor in being the last state standing against Medicaid expansion, but that’s shaping up to be the way this story ends. Without question, North Carolina’s obstinate refusal to expand the insurance program for the poor is killing people.”

On the teacher rally and Republicans’ harmful education policies…

Winston-Salem Journal:
“It’s part of a pattern in Republican-led Raleigh to punish rather than persuade. If they don’t like the outcome of an election, they write laws to reduce voter participation. If they don’t like the makeup of a city council or a school board, they write laws to change the balance. If they don’t like teachers coming to Raleigh to talk to them directly, they write a law to diminish future trips. Then they complain that voters and teachers see them as adversaries. In this instance, it’s time for legislators to listen. Sure, teachers want decent pay. But the rally is for more than that one goal. They also want support for other school personnel. And they want resources to better the lives of their students. They also want respect from a legislature that has verbally and legislatively opposed and maligned them. They deserve that much and more.”

Greensboro News & Record:
“In a Republican-backed maneuver obviously aimed at the rally, the state House’s education budget would change the law to forbid teachers from taking personal leave on a school day unless a substitute is available. Rather than hear teachers’ concerns, some lawmakers would prefer to silence them. Actually our educators will be teaching Wednesday, only in a bigger classroom than usual, offering a civics lesson to the entire state by taking a longer view — not one day, but the decades that are required to teach our children — and by exercising their constitutional right to petition their government.”

CBC:
“Lest Phil Berger, House Speaker Tim Moore or state Superintendent of Public Instruction Mark Johnson be confused, these dedicated and hard-working teachers are their employees. Their priority is the success of North Carolina’s public school children – NOT a boost to partisan candidates in the next legislative election. Teachers are coming to Raleigh today, by the thousands, because they don’t trust you, their bosses. They know, because they are teachers who understand facts and recognize when they are twisted to misrepresent reality, that public education is being short-changed.” 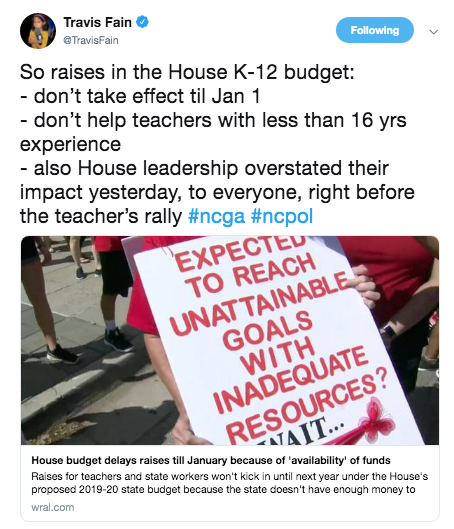