It’s been a rough time for Republicans who are desperate to prove that they’re putting public education before corporate tax cuts – without actually doing it. So far they’ve tried:

Unfortunately for Republicans, North Carolina’s teachers can see right through these smoke and mirrors tactics. So much for Teacher Appreciation Week.

Superintendent Mark Johnson’s “misleading” and “deceptive” accountability website has now been revealed as nothing more than another Republican attempt to deceive, lie to, and silence teachers.

The website, which was meant to encourage transparency on teacher pay but looks more like a campaign to boost Johnson’s approval ratings, brags that North Carolina’s average teacher pay is higher than the state’s median household income. Those with an understanding of basic math were quick to note this disingenuous comparison skews the data in Johnson’s, and the GOP’s, favor.

From CBC’s editorial board:

“We’ve shelled out a lot of money for something that is so significantly misleading as to be worthless. The specific “facts” presented may be in and of themselves accurate. But they are displayed in a way that lies to and misleads North Carolinians.”
CBC:

Republicans have lied about their delayed and limited teacher pay raises, refused to expand Medicaid, and tried to silence teachers by preventing future teacher rallies. Now, add Johnson’s smoke and mirrors website to the growing list of Republican attempts to deceive teachers.
WRAL:

The weekend can’t get here soon enough for Senator Tillis. From a conservative primary challenger who can self-fund to presidential threats and in-state protests of his health care agenda, Senator Tillis suffered the worst week of his fledgling reelection campaign.

Tuesday – Coverage Labels Tillis as One of the “Most Vulnerable Senators in 2020”
Tillis’ primary problem makes statewide and national news, with coverage focusing on Senator Tillis’ weakness and his “flip-flop for the ages.”
Roll Call:

Wednesday – “The Price NC is Paying” & Another Primary Challenger?
A recent editorial and statewide columnist point out, “the price NC is paying for Tillis’s loyalty to Trump” and his “flip-flop for the ages” includes:
CBC:

North Carolina is the only state in the country where a person cannot revoke consent once it’s given. Democratic Senator Jeff Jackson filed a bill to change that and close the consent loophole but, for the fourth year in a row, Republicans refused to give the bill a hearing.

Passing this bill should be a bipartisan priority – instead, Republicans are putting partisan politics before commonsense solutions.

“It is unconscionable that this bill — for the fourth year — was refused even a hearing. It appears they would simply rather not have the conversation. That’s unacceptable.”
WLOS:

Greensboro News & Record:
“Foremost, Medicaid expansion would provide care for North Carolinians who could otherwise afford none and would quite probably save a number of lives. It also would create as many as 40,000 jobs and help struggling rural hospitals….Medicaid expansion would help to address the state’s spiraling opioid crisis by providing greater access to treatment. And, of course, this increased coverage would be almost completely funded by the federal government — using taxes North Carolinians already pay. Beyond politics, there is no practical reason not to expand Medicaid in North Carolina.”

Fayetteville Observer:
“We were hopeful that this would be the year North Carolina changed the way it does redistricting for congressional and General Assembly seats. After all, we’ve been slapped by the courts so many times we’ve lost count. We hold the dubious title of the state most likely to commit shameless and discriminatory gerrymandering. Our record is so bad that the U.S. Supreme Court, which has long been loathe to meddle in the politics of redistricting, decided to accept a North Carolina case.”

CBC:
“Johnson and his patrons in the state legislature’s leadership have been unrelenting in their efforts to camouflage their tax-cutting largess to corporations and penny-pinching education spending as generosity. Educators didn’t flood Raleigh last week because they were having a hard time spending the money General Assembly appropriated for public education. They understand addition and subtraction. They know the differences between “average” and “median.” They can discern the truth (“I forgot to do my assignment”) from fiction (“The dog ate my homework.”) They also have the ability to distinguish between propaganda and transparency. Taxpayer funds need to be spent to present information enlightens and empowers citizens – not distorts and misleads to further entrench public officials.” 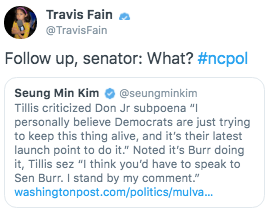