GOP TAX SCAM MODELED AFTER N.C. FAILURE: “I DON’T KNOW THE PEOPLE WHO THIS BENEFITS”

Last week, DC Republicans voted on a tax plan that looked alarmingly similar to North Carolina’s, landing our state in the pages of the Washington Post where they examined why we shouldn’t be a model for national tax reform.

“I don’t know the people who this benefits,” [rural small business owner] Henry said of the North Carolina tax cut.

Anyone claiming schools are better off after the tax cuts is “using smoke and mirrors,” [Alamance-Burlington Schools superintendent Bill] Harrison said.

A week of sunlight hasn’t been kind on Republicans’ vote for a tax scam that features giveaways to corporations and the wealthiest few at the expense of working families and the middle class.
AP:

DEMOCRATS FIRED UP FOR 2018

For the first time in a long time, we haven’t heard a peep from Dallas Woodhouse. Our elected GOP leaders refuses to renounce alleged child molester Roy Moore. Dallas apparently has “no opinion” on him.

This isn’t hard. And it’s shameful that NC Republicans can’t muster the moral backbone to put our country over their party. Sens. Tillis and Burr have – why won’t Berger, Moore and Forest? 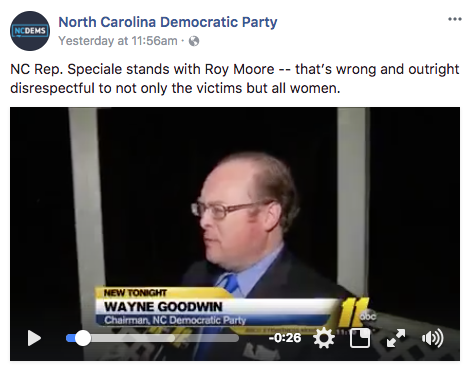 NC Democratic Party Chair Wayne Goodwin penned a letter to the editor of the Charlotte Observer last week to celebrate the success of North Carolina Democrats in 2017 and to share how we are prepared to break the supermajority in 2018:

“Amy Chiou’s op-ed piece ignored N.C. Democrats’ significant recent victories and missed the key takeaway from Virginia’s elections: A wave is building and N.C. Democrats are prepared to catch it.

NCDP flipped 22 Republican-controlled seats in November, including a new mayor in Fayetteville – while also holding onto the mayor’s office in Charlotte – by reaching and mobilizing 500,000 voters.

We’re also looking ahead, reinvesting in local parties and people. And we launched with Gov. Roy Cooper an unprecedented initiative – Break the Majority – to channel resources and expertise to key state level races.

People are frustrated with Republicans’ efforts to rig the system. NCDP is helping channel that energy.” – NCDP Chair Wayne Goodwin

JUDGES SAY “NO THANKS” TO JUDICIAL CHANGES

Republicans in Raleigh are trying to rig our judicial system because they’re tired of losing in court. Good thing North Carolina judges aren’t buying it. To quote Governor Cooper, “Given the choice between the people or the legislature selecting judges, I’ll go with the people every time.”

According to the News & Observer:

NC Republicans are claiming politics around the Special Master because he refused to uphold their blatant racial gerrymanders. Republicans are trying to undermine him because they know new districts will result in the fair and more competitive elections that North Carolinians deserve.

WRAL:
“After all, Senate leader Phil Berger, House Speaker Tim Moore and their redistricting lieutenants Rep. David Lewis and Sen. Ralph Hise probably feel like they’ve circumvented the U.S. and State Constitutions fair-and-square to manipulate voting districts so African-American voting influence is so mute that as few Democrats as possible get elected.”

News & Record: Our Opinion: Court meddling demands scrutiny
“There could be one N.C. Supreme Court seat on the 2018 ballot. Or seven. Or none. This uncertainty only 11 months before the election is astonishing. Yet it’s indicative of the chaos state legislators are pushing into the courts. The public must pay attention. Why might this happen? In 2016, Democrats gained a 4-3 majority on the Supreme Court. This legislative scheme would nullify that election and throw the entire court up for grabs in 2018. The public should reject political shenanigans in the judicial branch of government.”

Charlotte Observer: These small provisions speak volumes about the Republican tax plan
“Republicans in Washington insist that their new tax plan will benefit all Americans, but it’s no secret that it is especially good for some. The less affluent among us will see significantly smaller tax cuts that disappear after a few years. The more affluent see bigger tax cuts for longer, and corporations fare best of all with a dramatic and permanent drop in their tax rate. “

News & Observer: U.S. tax cuts follow NC’s wrong path
“[Senate Republican’s] approach had all the hallmarks of major North Carolina legislation since Republicans took full control of the legislature in 2011. There were no public hearings. Phone calls of protest were dismissed, and polls showing a majority of the public opposed were ignored. There was no Democratic support. Expert assessments of the legislation went unread or were waved off. “

News & Record: Our Opinion: Fair shake for voters
“Through partisan gerrymandering, legislators prefer to avoid competition. They set up districts where one party or the other is all but guaranteed an easy victory. That’s convenient for incumbents, but it cheats voters. They usually aren’t given meaningful choices, and they don’t get to participate in the political debates of the day.”

News & Record: Our Opinion: Court meddling demands scrutiny
“There could be one N.C. Supreme Court seat on the 2018 ballot. Or seven. Or none. This uncertainty only 11 months before the election is astonishing. Yet it’s indicative of the chaos state legislators are pushing into the courts. The public must pay attention.” 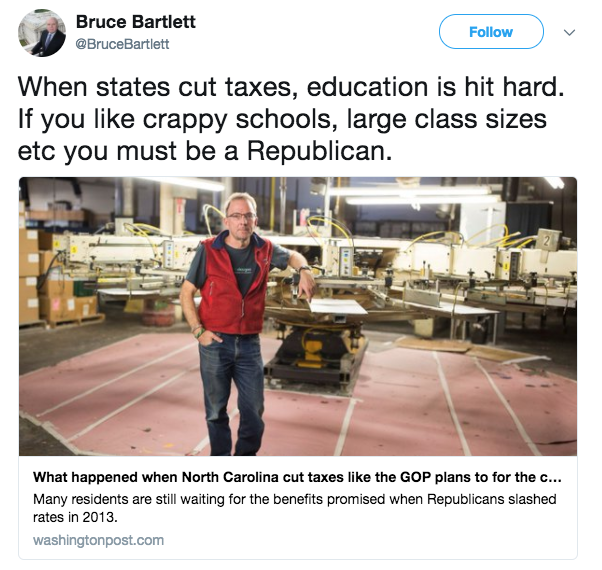 Some non-political reads as you’re enjoying a Full Steam beer and watching the snow fall: