Raleigh – NC GOP Rep. Dixon snuck into last year’s budget a taxpayer funded $830,000 giveaway to prop up a hotel, two golf courses, a country club and upscale restaurant owned by one of his top donors, the latest in Republican lawmakers’ trend of funneling taxpayer money to their political donors, according to a new report from the News & Observer this weekend.

Three weeks later, Dixon secured $830,000 for the sewer upgrades in the final version of the $23 billion state budget, one of dozens of earmarks — specially designated spending items — that lawmakers inserted totaling more than $70 million.

But this earmark primarily benefits a business co-founded by a powerful former state lawmaker who has long supported politicians of both parties with campaign donations. That includes Dixon, who was elected to the legislature in 2010. Since 2011, Murphy, his family and employees have given Dixon $42,750 in political contributions and in-kind support, such as food for a fundraiser, state campaign finance records show.

While blatant taxpayer giveaways for water infrastructure projects like this are “unusual” – similar appropriations typically are debated and evaluated by the State Water Infrastructure Authority – sneaking taxpayer money to big money donors has become common practice since Republicans took power:

But in recent years, state lawmakers have stepped up using earmarks for their districts to pay for projects that would typically go through the authority and other grant-awarding agencies.

The local town “hadn’t asked for his assistance” and even the company noted that more sewer capacity “wasn’t in the company’s immediate plans.” The money made one local town council member “uncomfortable saying yes” because no one knew where it came from:

“This one just sort of showed up on our desk,” Hepler said. “I don’t know who asked for the money, I don’t know where it came from and I was just a little bit uncomfortable saying yes.”

Hepler, who has had experience as a U.S. Department of Agriculture supervisor, said “I figured it was from legislators’ little fun fund.”

“Republicans have shown time and time again that they put paying back their big money political donors over the people of North Carolina,” NCDP Executive Director Kimberly Reynolds said. “Since taking power, North Carolina Republicans have shown they look out first and foremost for their big money donors, choosing to rig the system for the highest bidder rather than work for the best interests of their constituents.” 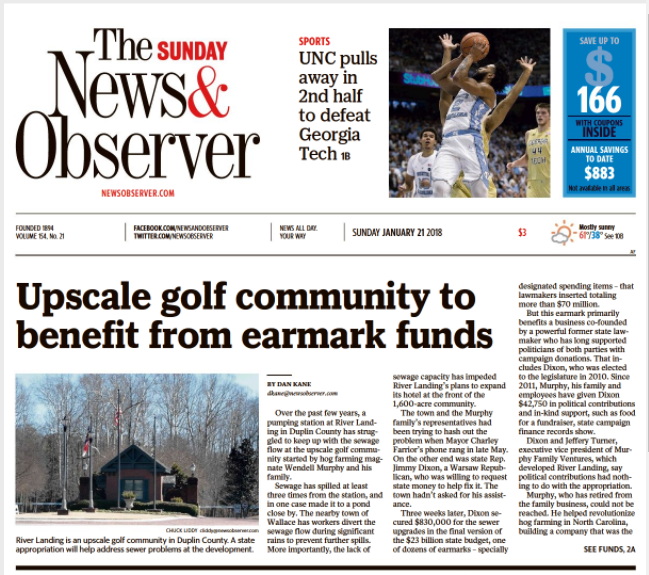 Speaker Moore: NC Unconstitutional Gerrymandering A “Model” for Other States